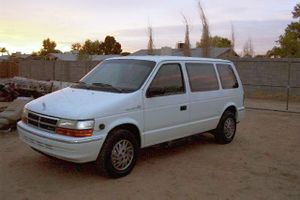 The Chrysler TEVan was a battery electric vehicle produced from 1993 to 1995 by Chrysler and sold primarily to electric utilities throughout the United States. The first generation used either nickel-iron or nickel-cadmium batteries. Only 56 were produced and were sold for approximately $120,000 each. Half were produced using nickel-iron batteries and half were equipped with the nickel-cadmium packs. The TEVan was built on the same production line as the gasoline-powered minivans at Chrysler's Windsor Assembly Plant in Ontario, Canada. It had a top speed of 70 mph (110 km/h), seating for five adults, and a curb weight of 5,060 lb (2,295 kg). The second generation, named the EPIC (Electric Powered Interurban Commuter Vehicle), was launched in 1997 with advanced lead acid batteries and later in 1998 with nickel metal-hydride batteries. It was offered for lease in New York and California in 1999.

The 180V nickel-cadmium pack consisted of 30 SAFT STM5-180 6V 180Ah batteries in six removable pods under the floor of the car, delivering over 50 miles (80 km) of range, and used an automatic watering system for easy battery maintenance. The nickel-iron pack consisted of 30 Eagle-Picher 6V 200Ah batteries in six pods under the floor and delivered over 60 miles (97 km) of range. The TEVan owner's manual stated 80 miles (130 km) of range.

The TEVan used a 27 hp, 65 hp max (48 kW) Separately-Excited GE DC traction motor coupled to a two-speed FWD trans-axle that featured Hi, Lo, Reverse and Park. The owner's manual referred to it as a 'semi-automatic transmission' although it used a clutch. The motor controller was also manufactured by GE. The EPIC used an AC traction motor and single speed transmissions.