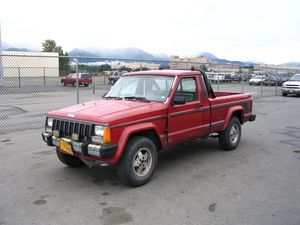 The Jeep Comanche (designated MJ) is a pickup truck version of the Cherokee compact SUV that was produced from 1986 to 1992. Rear-wheel and four-wheel-drive models were available as well as two cargo box lengths of six and seven feet.

The Comanche was a unibody vehicle, an unusual form of truck like the Volkswagen Rabbit pickup and Dodge Rampage. Jeep designers based its body, styling, and suspension on the Cherokee, which had been introduced for the 1984 model year.

AMC's Jeep engineering staff designed a subframe that connected to the modified Cherokee Monocoque (unibody) structure to support the cargo box. Two such subframes were designed; one for the long-bed model, which appeared first, and a second, shorter version for the short-bed, which debuted for 1987.

The Comanche uses the Cherokee's front suspension, with coil springs and upper and lower control arms. The Cherokee and Comanche were the first Jeeps to use this new "Quadra-Link" suspension. It was argued that the coil springs allowed for greater ride comfort and axle articulation during off-road excursions. A trackbar is used to keep the axle centered under the truck. Modified versions of this same basic suspension system were later used on the Grand Cherokee and the TJ Wrangler.

For the rear suspension, the truck uses leaf springs that are considerably longer than on Cherokees, which give Comanches good load-carrying capacity. There is also a heavy duty "Big Ton" package available (known as the "Metric Ton" package outside the U.S.) for long-bed models. The package included heavier-duty leaf springs and wheels, larger tires and an upgraded rear axle to a Dana 44 instead of a Dana 35, which increases stock payload capacity from 1,400 pounds (640 kg) to 2,205 pounds (1,000 kg), well above that of any other pickup of the Comanche's size. In fact, a Metric Ton Comanche's payload rating is higher than that of many larger pickups.

The inaugural 1986 Comanches could be equipped with one of three engines. The AMC 150 2.5 L, 150 CID I4, General Motors LR2 2.8 L V6, and Renault 2.1 L I4 turbodiesel were all offered from the start. The V6, which was the same basic unit used in the first generation Chevrolet S-10, had seven fewer horsepower than the base four-cylinder, only slightly more torque, and was equipped with a two-barrel carburetor instead of the four-cylinder's electronic TBI fuel injection. In addition, fuel mileage with the V6, particularly in four-wheel drive models, was generally poor.

Changes to the engine lineup happened in the truck's second year on the market. For 1987, the 2.8 L V6 was replaced by the new fuel-injected 4.0 L, 242 CID AMC 242 inline-six that delivered 173 hp (129 kW), 63 more hp than the V6. The new six-cylinder was also more fuel-efficient. The slow-selling turbodiesel was officially dropped at some point during the model year.

Other changes under the hood occurred in 1991, when Chrysler adopted their own engine control electronics to replace the original Renix (Renault/Bendix) systems. One positive effect of this change was that the 4.0 L, 242 CID, I-6 engine gained 17 hp (to 190 hp (142 kW), having already gained 4 hp (3 kW) in 1988), while the 2.5 L, 150 CID, I4 engine jumped from 117 hp (87 kW) to 130 hp (97 kW). In addition, most parts for the Chrysler systems are easier to come by, even though many Renix parts were borrowed from GM at the time, and are still widely available today and most are surprisingly cheap. Most people won't consider a Renix Comanche, as it has no Check Engine Light. (CEL) But if the owner can operate a simple and cheap multimeter, they will find that Renix systems are quite easy to diagnose and keep running.

During the production life of the Comanche, six different transmissions were offered, manufactured by Aisin, Chrysler and Peugeot. Aisin provided the AX-4 (four-speed), AX-5 and AX-15 (five-speed overdrive) manual transmissions, along with the AW-4 four-speed automatic that was used beginning in 1987. The AX-15 was phased in to replace the Peugeot BA-10/5 five-speed that had been used from 1987 until mid-1989 behind the 4.0 L I-6 engine.

Although Chrysler purchased AMC (and, by extension, Jeep) in 1987, only one Chrysler transmission was ever used in the Comanche, and that was prior to the takeover. 1986 models equipped with the 2.5 L I4 or 2.8 L V6 were offered with Chrysler's three-speed TorqueFlite A904 automatic. Throughout the Comanche's production run, Chrysler would continue AMC's practice of purchasing Aisin automatics that began in 1987.

After the Chrysler buyout, the Comanche, like the Cherokee, received only minor changes, primarily those that would improve reliability and parts interchangeability with other Chryslers. The lack of an extended cab body style, which all other compact trucks were offering by the time of the Comanche's debut, and the fact that the Comanche's prices were, in any given model year, higher than those of the top-selling American compacts (Ford Ranger and Chevrolet S-10)[citation needed], led[citation needed] to lagging sales as customers went elsewhere for roomier trucks.

As sales dropped, the Comanche was planned for discontinuation. A rumor existed that the Comanche would be replaced by a restyled Dodge Dakota (its body-on-frame sibling from Dodge), but Jeep dealers disliked the idea because the Dakota was generally heavier and less reliable than the Comanche.[citation needed] The company chose instead to cancel the Comanche at the end of the 1992 model year, after only a few thousand trucks had rolled off the Toledo, Ohio assembly line.

Some value the Comanche for its perceived durable drivetrain and uniqueness, and also in part because of its legacy as the "last Jeep pickup." Rust on floors, rocker panels, and framework are common problems for collectors and enthusiasts.