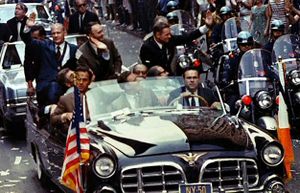 Three Chrysler Imperial Parade Phaetons were produced in 1952 by the Chrysler Corporation as ceremonial vehicles. They were styled by Virgil Exner and were in many ways a preview of the new "Forward Look" styling that would debut in 1955 on the newly separate Imperial marque and on other full-size Chryslers.

The cars were based on stretched (to 147.5 in) 1952 Crown Imperial Limousine chassis and carried completely custom bodywork with the exception of the 1951 Imperial grille, bumpers and front and rear trim. Almost uniquely for a postwar car, they were dual-cowl phaetons, with separate front and rear passenger compartments, each with its own windshield. There were no side windows, and the flimsy lightweight Dacron convertible top covered only the rear compartment. It retracted fully beneath the rear-hinged deck lid when not in use. The rear doors were suicide doors and had no exterior handles.

Under the custom bodywork, the mechanicals were standard top-of-the-line Chrysler for the period, with a 331 cubic inch (5.42 L) FirePower V8 engine, torque converter transmission, and power steering.

Three cars were built. One was for New York City, the second for Los Angeles, and the third was intended to be a gift to the White House, but the gift was refused as against the then rules for receiving gifts. Instead, the third car was nominally based in Detroit and was used around the country. The cars continued to be owned and serviced by the Chrysler Corporation.

After three years of service, the cars were brought back to the factory in 1955 to be updated to 1956 Imperial appearance, in which form they continue to exist to the present day. The front and rear, including grilles, bumpers and trim, were replaced. Internally, the engines were updated with 4-barrel carburetors, and fully-automatic Powerflite transmissions were installed. The cars were all repainted. After the rebuild, the cars were donated to the respective cities.

The Phaeton is still occasionally used for official functions, parades and ceremonies. It has carried many dignitaries, celebrities and notables over the years, including (in the picture at top) the Apollo 11 astronauts.

The Los Angeles car was painted cream with a rose interior, and was first used in the 1953 Tournament of Roses Parade. It was subsequently used up and down the West Coast. In its 1955 rebuild, it was repainted metallic silver-blue with an off-white interior. It has since been restored and repainted white, retaining its off-white interior, and is still in the possession of the City of Los Angeles. It still takes part in official parades and celebrations.

The Detroit car was originally painted in a metallic green with a natural pigskin interior, and was used in events around the country. It was repainted in desert sand with a red interior in its 1955 rebuild. This Phaeton was sold and ended up in private hands, becoming part of Paul Stern's collection for some time before being sold to the Imperial Palace collection in Las Vegas, Nevada where it was displayed for many years. In 2001, with the mass of the Imperial Palace collection being broken up, it was sold to Robert Petersen and is now on display at the Petersen Automotive Museum in Los Angeles. The car is currently in white with a red interior.