The Chrysler PT Cruiser was launched by Chrysler as a retro-styled wagon in 2000 and as a convertible in 2005. Originally conceived as a Plymouth model, the PT Cruiser received the Chrysler nameplate on introduction — in anticipation of the 2001 discontinuation of the Plymouth brand.

The convertible ceased production December 21, 2007, with the last 2007 convertibles were marketed as 2008 models. Chrysler announced the discontinuation of the PT Cruiser, altogether, on January 12, 2009.

The name PT Cruiser includes the initialism PT, standing for Personal Transportation and designating the car's platform as well as production code. The name also recalls the 1930s line of Plymouth Trucks known by the "PT" moniker.

The PT Cruiser is a front-wheel drive 5-passenger vehicle, classified as a truck in the U.S. by the NHTSA for CAFE fuel economy calculations but as a car by most other metrics. Chrysler specifically designed the PT Cruiser to fit the NHTSA criteria for a light truck in order to bring the average fuel efficiency of the company's light truck fleet into compliance with CAFE standards.[1] A turbocharged GT model was introduced for the 2003 model year. A convertible was introduced for the 2005 model year.

The PT Cruiser is manufactured at Toluca Car Assembly in Toluca, Mexico. On March 8, 2006, DaimlerChrysler announced that it had built 1,000,000 PT Cruisers at the Toluca plant since February 14, 2000. The PT Cruiser was also assembled in Graz, Austria, for global markets (outside North America) in 2002, using the production code PG. European PT Cruisers built in 2001 or from 2003 onwards are built in Mexico under the PT production code. The American version features a 2.4 L four-cylinder gasoline engine. In addition to this standard model, a 2.2 L four-cylinder diesel engine built by Mercedes Benz is also available in Europe, Asia, and South Africa. A 2 liter engine (D4RE) was available outside the U.S. It produces 140 hp (100 kW) SAE at 6500 rpm with 130 ft·lbf (180 N·m) of torque at 4800 rpm.

When initially introduced, demand for the car was, in many cases, higher than dealer supply, seeing customers put on waiting lists. Anticipation of the car was high, making for a debut that was among the most successful in company history.[citation needed]

In 2002 Euro NCAP gave the PT Cruiser a three (out of five) stars rating. Results in the frontal impact test (6 out of 16 possible points) were in part due to the fact that the PT Cruiser is designed -under U.S. regulations- to protect also unbelted occupants. Height of the seats and side airbags helped to attain a maximum score of 16 points in the side impact test [2] 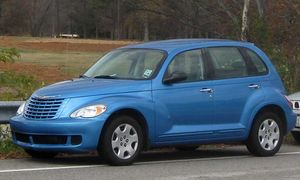 While the body style remains remarkably consistent from year to year, there are actually multiple models of the PT Cruiser, designated by unique badges in the lower left hand corner of the rear lift-gate. Models include the Classic Edition, Limited Edition, Touring Edition, "Dream Cruiser", "Street Cruiser", "Pacific Coast Highway Edition" and PT Cruiser GT. Turbo edition models are identified by a "2.4L Turbo" badge on the lower right hand corner of the rear lift-gate. The GT model has a badge on the right hand corner of the lift-gate says "2.4L Turbo High Output" (indicating it is the 220/230 hp engine version).

A four-seat convertible model was added for 2005. It is a two-door car with an integrated "sport bar" for added rigidity and rollover protection. It was discovered that the sport bar also caused air to flow over the rear passengers, resulting in a less drafty ride for those in the rear seats.

The PT Cruiser was updated for 2006 to include scalloped headlights, a new 'chrome' grille (that no longer extended below the "bumper"), new lower front fascia, available round fog lamps and redesigned taillights. Interior updates included an updated dash, new materials, and an analog clock to the center stack. The audio system featured an line-in jack for MP3 players integrated into the dash. The turbocharged 2.4 L engine was available in 180 hp (134 kW) or "High-Output" 230 hp (172 kW) versions. A "Mopar" cruise control unit became available as an after market unit on 2007 models. Also in 2007, Chrysler dealers were permitted to order vehicles with separate options (un-bundled options from option packages) such as anti-lock brakes and Side Impact Airbags. Sirius Satellite Radio radio also became an option which could be installed as a Dealer option with a factory appearance (i.e. roof mount satellite antenna).

The PT Cruiser was originally conceived as a Plymouth model, before Chrysler's merger with Daimler-Benz. At the time, Chrysler had planned a new look for Plymouth, previewed by the Plymouth Prowler "hot rod". Styling cues from the Prowler, particularly the grille, were used to create the Plymouth Pronto concept car in 1997. The look was refined, and in 1998, another Plymouth concept called the Chrysler Pronto Cruizer directly previewed the styling of the PT Cruiser. The Pronto Cruizer was designed as a modern interpretation of the Chrysler Airflow with Dodge Neon components, but the final design used a separate platform. The new DaimlerChrysler firm did not have much faith in Plymouth as a separate entity, and began steps to rationalize and cancel the marque. Consequently, the PT Cruiser appeared in public only as a Chrysler.

The PT Cruiser also resembles the 1997 Chrysler CCV prototype — which would evolve into the styling of the PT Cruiser. 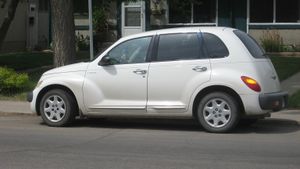 This version is based on PT Cruiser LX, but comes with a special "Sunset Crystal" paint-job which is accented with various chrome body-trim pieces, deep-tint glass, 16-inch chrome wheels with all-season touring tires. 500 cars are to be made, at a list of US$16,650-17,475.[9]

The Dream Cruiser Series 5 was announced in conjunction with the 2008 Woodward Dream Cruise. It will only come in a single exterior color--pearl white with a black roof and spoiler. The interior will be gray with leather and chrome trim. Distinctive exterior features will include seventeen-inch wheels, aluminium grilles, and molding and door badges in chrome. The engine is either the 150 horsepower (110 kW) four cylinder or the 180 horsepower (130 kW) turbocharged four cylinder; both will have a four-speed automatic transmission. The Dream Cruiser Series 5 will be a limited production run with only 1,750 vehicles and have a list price of US$22,700.[10][6]