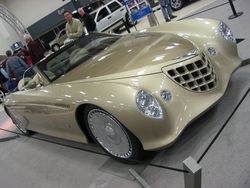 The Chrysler Phaeton was a coupe convertible concept car built by Chrysler in 1997.

The Phaeton was inspired by Chrysler's 1941 Newport Phaeton. It had a 48-valve 5.5 L aluminum V12 rated at 425 hp. The suspension was a modified double wishbone with independent double A-arms. Another unique feature is that it has gauges in the rear seat. It was included in the Playstation game Gran Turismo 2 as a special car that could only be won.