In the 1970s, the Hillman Avenger was branded as a Dodge in some markets where the Hillman brand did not exist. At the time, Hillman was owned by Chrysler Corporation. Chrysler's 1970 Annual Report noted that these markets were outside of North America and Europe; the Dodge Avenger was sold in including South Africa and possibly other countries [1].

The first Dodge Avenger to be sold in North America was a 2-door coupe produced from 1995 to 2000, in a similar size and price class as the Dodge Daytona, which was discontinued in 1993. The Avenger, along with the similar Chrysler Sebring coupe, was built by Diamond Star Motors (DSM), a joint venture between Chrysler Corporation and Mitsubishi Motors, on a version of the Mitsubishi Galant platform (which also spawned the similar Mitsubishi Eclipse). Mitsubishi purchased Chrysler's share of the joint venture in 1995. Avengers and Sebring coupes built from 1995 to 1996 both have DSM markings in their engine compartments.

The Avenger had a 103 in (2.62 m) wheelbase and used either a 2.0 L straight-4 (the Chrysler 420A) or a Mitsubishi-designed 2.5 L V6. The 4-cylinder was coupled to either a five-speed manual transmission, shared with the Mitsubishi Eclipse and Eagle Talon, or a 4-speed automatic. The V6 was only available with the A604 transmission.[3]

ABS was used in all ES models to 1999. In 1997, the front fascia, trunklid, and rear bumper were changed; 16 inch wheels were standard, and the license plate was moved from the decklid to the rear bumper. In 2000, the V6 and automatic transmission combination was made standard on all Avengers, and ABS was made an "option" for ES models. The four-cylinder engine was dropped for 2000.

A "Sport Appearance Package" could be added on to Base model cars. This package included alloy wheels (different from those on the ES) with other options.

1994: A 1994 Dodge IROC Dodge Avenger sports coupe replaced the Dodge Daytona, which had been used since 1990. Only six of these were sold from IROC in New Jersey.[citation needed] All were powered by a small block V8.

1997: Sport model introduced (in addition to the base and SE). The Avenger Sport package consisted of exclusive 16-inch aluminum wheels and a body-color spoiler. New front and rear fascias are added. Added a body-color rear spoiler, P215/50HR17 tires, and 17-inch cast aluminum wheels for the ES. The V6 is also standard for the ES, as well as rear disc brakes.

1999: Next generation driver and front passenger airbags are added, as well as a new exterior color: Shark Blue. The V6 engine and automatic transmission are standard on all models in mid-year, as well as several options.

In 2000, the Avenger was discontinued and replaced by the Dodge Stratus coupe for 2001. This model was also made at the former Diamond Star plant by Mitsubishi, using the Eclipse platform and architecture, though the Stratus sedan was engineered and built by Chrysler.

The Dodge Avenger name returned in February 2007 as a MY2008 model[5] as a sedan to replace the Dodge Stratus, whose coupe version had replaced the original Avenger in 2001. According to some reports, the Avenger, along with the redesigned Chrysler Sebring, shares a DaimlerChrysler/Mitsubishi Motors platform called JS which used the Mitsubishi GS as a starting point, then was heavily modified. The base engine in the SE and SXT trim levels is the 2.4 LGEMAI4 naturally-aspirated "World Engine", a joint venture between DaimlerChrysler, Mitsubishi and Hyundai. Additional engines include an optional 2.7 L V6 in the SXT and a standard 3.5 L V6 in the R/T trim level. In addition to the 2.4 L "World Engine" and the V6s, export vehicles will be offered with the 2.0 L naturally-aspirated "World Engine", as well as a 2.0 L turbocharged diesel (Pumpe-Düse) made by Volkswagen.[6] As a 2008 model, the Dodge Avenger came to showrooms in February 2007. 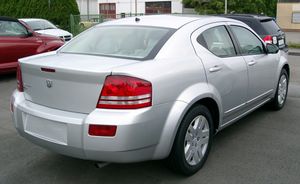 Features on the new Avenger include optional heated/cooled cup holders as well as Dodge's new "Chill Zone", a feature that comes standard on all Avenger models, which can store up to four 12-US fl oz cans in the glove box and chill them to 40 degrees Fahrenheit.[7]

The Avenger replaced the Charger as Dodge's car in NASCAR in 2007 for Car of Tomorrow races. It got its first win with former Formula 1 driver Juan Pablo Montoya in the 2007 Toyota/Save Mart 350 at the Infineon Raceway.

The Avenger was officially unveiled at the Paris Motor Show on September 28, 2006 as a concept car. It has been launched in Europe and will be sold in Britain, filling a gap in the Chrysler range that was left by the Neon's demise four years earlier. It has also been launched in Australia, although currently with only the 2.4L engine.

In the US, the Avenger was launched with a 30 television ad, "Tuned Up," that debuted Sunday, March 4, 2007 during NHL hockey, an ad in which a lab technician discovers he can play Smoke on the Water by Deep Purple on the Avenger's transmission. Another television spot likened the Avenger to the "superhero" vehicle for the everyman, depicting a driver piloting his Avenger through Gotham-like streets and alleys, speaking to the MyGig entertainment system in distinctly Batman-reminiscent tones, to arrive home, pull into a two-car garage and open the rear door to a sleeping child in the rear car-seat. [10]

The first-generation Dodge Avenger body style was widely used in the National Hot Rod Association, but came to the most prominence being driven by Darrell Alderman, and Scott Geoffrion, during their run from 1994-2000, as the celebrated Dodge Boys. The car was also used for the 1994 and 1995 incarnations of the International Race of Champions. The second-generation Dodge Avenger was used in the 2007 NASCAR Nextel Cup Season as the Car of Tomorrow model from Dodge. In 2008, the Dodge CoT was changed back to the Charger. 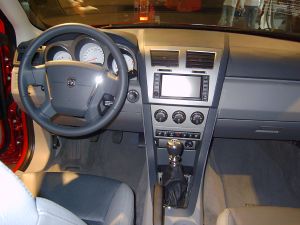