The Dodge Custom 880 was an automobile sold under the Chrysler Corporation's Dodge brand from 1962 through the end of the 1965 model year. The 880 was a stop-gap vehicle brought to market quickly to remedy Dodge’s vulnerability in the mid-price fullsize field, as well as to help fill the void in Chrysler's line-up left by the discontinuation of DeSoto in 1961.

The Custom 880 was a quick solution to consumer demand for a full-size Dodge passenger car during the 1962 model year.

The 1962 Dodges introduced in the fall of 1961 had their origins in a rumor heard by a Chrysler executive that Chevrolet was planning to downsize their full-sized automobiles for the 1962 model year. Not wanting Chrysler to play catch-up, and wanting to beat Chevrolet at its own game, Plymouth and Dodge designs were placed in an emergency downsizing program that took the previously-approved full-size designs and shrank them to smaller vehicles that would compete head-to-head with the rumored smaller Chevrolet.

But to Chrysler's shock and dismay, come 1962, Chevrolet's full-size lineup emerged slightly larger than the 1961 models, with the mid-range Chevrolet Bel Air (on a 119-inch wheelbase) growing a half-inch longer in its body, although the car weighed 45 pounds less than its 1961 predecessor. The rumored "small Chevrolet" turned out to be the new and more-conventional Chevy II compact, which was intended to bolster Chevy's position where the Corvair had faltered in that segment of the market.

The "full-size" Dodge Polara and Dart that emerged for 1962 were built on a three inch shorter (116-inch) wheelbase and were seven inches shorter overall than the comparable Chevrolet, placing Dodge in the precarious position with consumers of not offering a true full-sized automobile. Ford Motor Company also brought its new intermediate- or mid-size Fairlane and Mercury Meteor to market for '62, and those cars rode a 115-inch wheelbase. They were roughly the same size as the new standard-size Dodges, which made the new Mopars intermediates by default.

Compounding the size issue were the designs themselves, which did not translate well from their full-size origins to what amounted to intermediate size. Of course, in the rush to shrink the cars, Chrysler engineers decreed that the proposed curved side glass be deleted in favor of flat glass, which blunted the effect of the graceful curve of the body sides. They also reduced the total glass area, which made the cars look smaller as well.

Stuck with an awkward design for second year in a row (the 1961 models had awkward-looking "reversed" tailfins and a pinched grille, among other unusual features), combined with the cars' smaller overall size, threatened Dodge's viability enough that Chrysler was forced to move immediately to stem Dodge's financial and market share losses.

The rear fascia of the 1962 Dodge Custom 880 was identical to the 1962 Chrysler Newport save for the marque and model badging.

Because it didn’t have the luxury of lead time sufficient to develop an all new full-sized Dodge, Chrysler approved the sharing of the full-size body used by the Chrysler Newport and the non-letter 300 series. The models were differentiated by mating a modified 1961 Dodge Polara front clip to the Newport's definned rear quarter panels and passenger compartment. This act of body sharing allowed Dodge to launch the car in January 1962.

The only visible cue at the front of the car that was different from the 1961 Dodge was the addition of Dodge’s new three-pointed emblem (which its stylist jokingly named "Fratzog" only to have the name stick) in place of the stylized “star bar” from the 1961 Polara. From the rear, the 1962 Custom 880 was identical to the Chrysler Newport save for its Dodge badging.

The model name Custom 880 was derived from Dodge’s numerical sub-model naming structure that was also used on the Dart and sportier models of the Polara, although the model name itself was to be seen nowhere on the car. Only "Dodge" badges on the rear quarter panels and decklid of the car were applied.

For the short 1962 run, the Custom 880 was available as a four-door sedan, two- or four-door hardtop, a two-door convertible, and a choice of six- or nine-passenger station wagons, which featured Chrysler’s hardtop styling.

Despite its late arrival, the Custom 880 proved to be a success. A total of 17,500 vehicles were produced, earning sales that Dodge would have otherwise lost.

For 1963, the Custom 880 returned with a full offering of body styles, and a new base model, simply named the 880. Chrysler redesigned its cars for 1963, leaving the 880’s body unique to Dodge, although the car was still produced alongside the now totally-different Chrysler.

In what must have been near-record time, Dodge designers created an entirely new look for the car ahead of the cowl, fronted by a new convex grille in the shape of a very long oval. Straighter front fenders and a hood with a depressed central section (featuring the Dodge name in block letters above the grille in this section) were also created, and the designers cleverly integrated the new Chrysler's front bumper into the design as well.

At the rear, there was less change, although the car received restyled taillights. Set in heavy chromed housings, they were mounted to the carryover quarter panels and imparted more of a "Dodge look" to the rear, as one of Dodge's styling hallmarks of the time were round taillights.

The new base-model 880 station wagons utilized the pillared body in both six and nine passenger models, while the Custom-series wagons featured the pillarless hardtop design. With Chrysler no longer using the body and its interior trim elements, Custom 880s were better appointed than they had been during the 1962 model year. 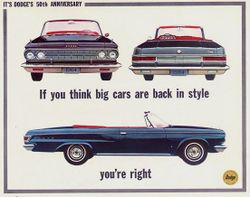 The 880 and Custom 880 received their most significant and final redesign of the 1960 body for 1964. This time, the rear body contours were squared up somewhat, with new decklids, wraparound rectangular taillights, and new quarter panels. Four-door models received a new roofline, although this was actually the same as had been used on the Chrysler New Yorker until 1962. Regardless, it did impart a fresh appearance. The grille was also updated, this time featuring a concave design with a central horizontal break spanning the distance between the headlights.

Custom 880s received stainless steel rocker panel trim, foam-padded seats, and a grooved stainless steel panel that spanned the distance between the taillights. The Customs, befitting their status as the top of the 880 line, also received better interior appointments than the base models enjoyed.

Because of tooling expenses, station wagon bodies, which were also shared with Chrysler models, did not receive all of the changes that the cars enjoyed. Most notably, station wagons continued to feature the heavy rear horizontal blade stamping first seen on the 1961 Plymouth wagons. The station wagons continued in both pillared (880) and hardtop (Custom 880) models, although this would be the final year for the hardtop wagon – Dodge and Chrysler being the last American automotive brands to offer the style. Station wagons also received rectangular taillights that wrapped around the sides of the vehicle.

All 880s and Custom 880s received a revised instrument cluster layout, replacing the previous design, which had been in use with little change since 1961.

The 880 and Custom 880 enjoyed favorable press reviews, especially for their redesign. Evidently, the public also agreed, as they bought 31,800 vehicles, a record for the model. 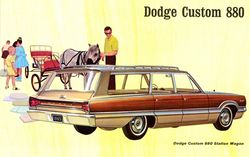 1965 marked the first time that Elwood Engel's influence on Chrysler's corporate overall design themes was fully expressed, although he had joined the company in 1961. Gone were the curves and awkward angles that were a legacy from the final Virgil Exner-styled cars. Engel's design philosophy, which was encouraged by Chrysler chairman Lynn Townsend, took Chrysler's products in the direction of crisp, geometric angles; indeed, rectangular and trapezoidal shapes dominated Dodge's fullsize designs for the year.

The introductions of the 1965 models also allowed Chrysler to rectify its 1962 mistake and reintroduced a full-sized Dodge Polara to the public. The "new" Polara took the position formerly held by the 880, with the Custom 880 taking the top trim level. The sporty new Dodge Monaco, which was available only as a two-door hardtop, was the top-of-the-line model produced by Dodge in 1965 and was designed to compete against the Pontiac Grand Prix.

All Custom 880s came with the standard features found in the Polara and added foam-padded seats and stainless steel window frames on station wagons and sedans. Hardtops and convertibles featured all-vinyl interiors. Custom 880s also featured a pillared six-window "town sedan" body that was unavailable in the Polara series. The series also featured the first Dodge-brand "wood" trimmed station wagon since the early 1950s, a look achieved through the use of Di-Noc appliqué framed in stainless steel trim. A total of 23,700 Custom 880s, all with V8 engines, were built during the model year.

Dodge discontinued the Custom 880 nameplate at the end of the 1965 model year in the United States. In an effort to move its top full-size series upscale for 1966, the division adopted the Monaco name for all of the former Custom 880 models, with the exception of the six-window sedan, which was discontinued. The original Monaco hardtop added the 500 label for '66, and was still promoted as a competitor to the Pontiac Grand Prix.