The Dodge EV development vehicle, also called Dodge Circuit EV sports car, is a two-passenger, rear-wheel-drive, all-electric sports car that combines a lithium-ion battery pack with a 200-kilowatt motor, capable of generating 268 horsepower (200 kW) and 480 foot-pounds of torque. That's enough to propel the vehicle to 60 miles per hour (mph) in less than 5 seconds and to reach a top speed exceeding 120 mph (190 km/h).[1] 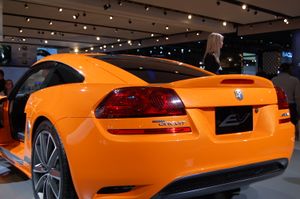 The Dodge EV at the 2009 North American International Auto Show.

Most notably, Chrysler claims that the Dodge EV has a driving range of 150 miles (240 km) to 200 miles (320 km) miles, approaching the range and performance of the all-electric Tesla Roadster. According to Chrysler, the Dodge EV can be recharged in eight hours using a standard 110-volt outlet, or in only four hours using a 220-volt outlet, the type commonly used for electric ovens and dryers.[1]

The Dodge EV is based on the current Lotus Europa S sports car.

Besides the fact that it weighs 300 pounds more than a stock Europa, it will accelerate to a impressive speed. All thanks to the 200-kW electric motor that produces an incredible 480 lb.-ft. of torque, the EV plows a quarter-mile in less than 13.0 seconds. This all, new electric vehicle is thirty percent likely to be put on the market as early as the end of 2010, the same time GM plans to start selling the 2011 Chevy Volt. Pricing on the EV has not yet been determined, but this state of the art technology does not come cheap. But with mass production of the battery that powers this car skyrocketing around 2012, the price will most likely come down a bit, making cars such as the Dodge EV more affordable.

Lou Rhodes, the man who is known to be a “straight talking guru of electric vehicles for Chrysler said: "There has always been product that has turned Chrysler around in the past. We believe this is one of the products that will do it for the company in the future." After all his words were said it was time for some fun. Rhodes got behind the wheel of the Dodge EV and lined it up against a Dodge Challenger 6.1 Hemi that was said to be conveniently nearby. A drag strip was set up in the Rose Bowl parking lot. As people lined the strip to watch this high speed battle, Rhodes got ready to represent his car. On the first run, the 480 pound-feet of electric torque on hand to the Dodge EV left the Challenger in its dust to be beaten at the finish line. All credit to the EV at the 800-foot line. As Dan Neil said, “No matter the car, no matter the company, no matter the technology, it's never a good idea to show up the boss.”

Chrysler has unveiled the working prototypes of this all-electric vehicle and announced plans to bring it to market in the United States by 2010.[2]

It was introduced at the 2009 North American International Auto Show [3].