Chrysler introduced the Dodge Caravan minivan along with its rebadged variant, the Plymouth Voyager in November 1983, for the 1984 model year — followed by the Dodge Grand Caravan and Plymouth Grand Voyager long-wheelbase (LWB) models in 1987, the rebadged Chrysler Town and Country in 1990, and the Volkswagen Routan in 2008.

Chrysler manufactures and markets its minivan series worldwide. Together with its nameplate variants, the Chrysler Town and Country, Chrysler Voyager, and Plymouth Voyager, the Chrysler minivans have ranked as the 13th bestselling automotive nameplate worldwide, with over 12 million sold.[1]

The idea of a modern minivan had been conceived by Lee Iaccoca and Hal Sperlich during their earlier tenure at Ford Motor Company. Henry Ford II had rejected Iaccoca's and Sperlich's idea (and a prototype) of a minivan in 1974, then rumored to carry the name "Maxivan". After Iaccoca moved to Chrysler Corporation, he recruited Sperlich to also join Chrysler and together they created the T115 minivan — a prototype that was to become the Caravan and Voyager.

The Chrysler minivans launched a few months ahead of the Renault Espace (the first MPV/minivan in Europe, initially presented to executives as a Talbot in 1979[2], but not launched until 1984), making them the first of their kind — effectively created the modern minivan segment in the US.

Since their introduction in the fall of 1983, the Chrysler minivans have consistently been the best-selling minivans in the United States,[3] with over 12 million Chrysler, Dodge and Plymouth minivans[3] in over 80 countries[3] sold as of October 2008. Only recently, has Chrysler ceded the top-selling minivan spot to the Honda Odyssey[3].

Generation I Caravans used the Chrysler S platform, which was closely related to the K-cars Dodge Aries and Plymouth Reliant. There were four trim levels on the Generation I Caravan: base, mainstream SE, upscale LE, and sporty ES. The Caravan was on Car and Driver magazine's Ten Best list for 1985. Both a three-speed TorqueFlite automatic transmission and a five-speed manual were available with the inline-4, including the turbocharged 2.5 L (this was a rare combination).

A cargo version of the Caravan, called the Mini Ram Van, was also introduced in 1984. It was renamed as the Caravan C/V for 1989, and was discontinued after 1995. It was available either with the short or long wheelbase models. Unique to the Caravan C/V was the option of either having the traditional hatch door in the back or the optional "barn doors" (with or without windows), swing-out versions similar to those of more traditional cargo vans. These doors were made of fiberglass and required the C/V vans to be "drop shipped" as these doors were custom installed by another vendor. 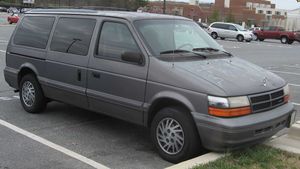 This generation of vans brought additional innovations, such as:

Note: All wheel drive was only available on loaded SE or higher models.

With Generation III, the Chrysler minivans long - and short - wheelbase models, three - and four-door configurations, and eight different powertrains -- including electric and compressed natural gas, on a single, flexible platform.

The 1996 redesign used the Chrysler NS platform and included a driver's side sliding door (optional initially, to become standard equipment later), a first for Chrysler. With Generation III, Chrysler introduced a seat management system marketed as Easy Out Roller Seats.

Base models of the Caravan were offered in most states with either a 2.4 L four-cylinder or the 3.0 L Mitsubishi V6 engine, except in several northeastern states, where the Mitsubishi V6 didn't meet emissions standards. In those locales, the 3.3 L engine was offered as the V6 option from 1997 through 2000. The manual transmission, never popular, was dropped. The 2.4 L four-cylinder engine produced more power than the Mitsubishi 3.0 had in the first two generations.

The 1996 Caravan, along with the Plymouth Voyager and the Chrysler Town and Country won the North American Car of the Year award. The Caravan itself won Motor Trend magazine's Car of the Year 1996 and appeared on Car and Driver magazine's Ten Best list for 1996 and 1997.

Note: All-wheel drive was only available on loaded SE or higher models

Other plans for this model year included three minivan concepts all to be made in the Windsor Assembly, the Dodge Caravan R/T, Voyager XG, and the Chrysler Pacifica. The Caravan R/T was to include the most powerful engine ever for a minivan, rated at 325 hp (240 kW). It had two Dodge Viper hoodscoops, a brushed aluminum instrument panel, racing-style pedals, and black and white rubber flooring.[citation needed] The Voyager XG was more rugged, and included many outdoor amenities, such as a built-in ice pack.[citation needed] The Chrysler Pacifica was more luxurious, had power leather seats and footrests, overhead bins and lighting, an LHS grille, and roof-long skylights. The skylight feature was used by Nissan in the Quest. The Pacifica actually did come to be in 2004, based on the current Caravan, except that it became a crossover SUV rather than a minivan.

In 1999, Dodge introduced the Caravan EPIC, a fully-electric mini-van. The EPIC was powered by 28 12-volt NiMH batteries and was capable of traveling up to 80 miles on a single charge. The EPIC was sold as a fleet-only lease vehicle. Production of the EPIC was discontinued in 2001. Only a few hundred of these vehicles were produced and sold. After the leases expired they were returned and crushed. Approximately 10 vans remain in private hands today.

Beginning in 2001, the Generation IV minivans were based on the Chrysler RS platform and featured a larger body frame with modified headlights and taillights. In addition to other detailed changes, power sliding doors and a power hatch became available as options. The Mitsubishi 3.0 L V6, which no longer met emissions standards in California and the northeastern U.S., was discontinued, and a more powerful 3.8L engine, based on the 3.3L, became available.

In 2003, the Caravan C/V and Grand Caravan C/V returned after having been discontinued in 1995. The C/V featured the option of deleted side windows (replaced by composite panels), optional rear seats, a cargo floor made of plastic material similar to pickup truck bedliners, rubber flooring in lieu of carpeting and normal hatch at the rear.

2005 changes to the Caravan included a revised grille, new foglight fascia, relocated information center (from behind the gauges to the overhead console) and a system of in-floor folding second and third row seats, marketed as With Generation III, Chrysler introduced a seat management system marketed as Stow'n Go seating.

With discontinuation of the short-wheelbase Caravan, Dodge offered the Journey on nearly an identical wheelbase and in crossover rather than minivan form. Although the SWB model, which had accounted for half of all sales in Canada, [4] cost approximately $2,000 less and offered a four-cylinder engine option with improved fuel economy, Chrysler executives noted the SWB Caravan was discontinued to accommodate new features offered in the Grand Caravan, consistent with the demands of the majority of the minivan market.[5] Shortly thereafter, the market shifted briefly away from minivans and SUVs with the gasoline price spikes of the earlier part of 2008.[5] This trend began to reverse itself towards the fall of 2008 as prices held steady and more drivers were planning their trips ahead to save fuel.[5]

Beginning with Generation V, Volkswagen began marketing the Routan, a rebadged variant of the Chrysler RT platform minivan with revised styling and content, for the North American and Mexican markets.

The Routan is manufactured at Windsor Assembly alongside the Grand Caravan, debuted in 2008 at the Chicago Auto Show and with sales beginning in autumn of 2008, and features neither Chrysler's Stow'n Go nor Swivel'n Go seating systems.

In 1992 innovated a second row bench seat integrating two child booster seats. These seats have continued as an available option through Generation V.

In 1996, Chrysler introduced a system of seats to simplify installation, removal, and re-positioning— marketed as Easy-Out Roller Seats. When installed, the seats are latched to floor-mounted strikers. When unlatched, eight rollers lift each seat, allowing it to be rolled fore and aft. Tracks have locator depressions for rollers, thus enabling simple installation. Ergonomic levers at the seatbacks release the floor latches single handedly without tools and raise the seats onto the rollers in a single motion. Additionally, seatbacks were designed to fold forward. Seat roller tracks are permanently attached to the floor and seat stanchions are aligned, fascillitating the longitiudinal rolling of the seats. Bench seat stanchions were moved inboard to reduce bending stress in the seat frames, allowing them to be lighter.

When configured as two and three person benches (available through Generation IV), the Easy Out Roller Seats could be unwieldy. Beginning in 2001, second and third row seats became available in a 'quad' configuration — bucket or captain chairs in the second row and a third row three-person 50/50 split "bench" — with each section weighing under 50 lbs. The Easy-out system remained in use through Generation V — where certain models featured a two-person bench and the under-floor compartments from the Stow'n Go system.

The Volkswagen Routan, a rebadged nameplate variant of the Chrysler minivans, uses the Easy Out Roller Seats on its second row seating.

In 2005, Chrysler introduced a system of second and third row seating that folded completely into under-floor compartments — marketed as Stow 'n Go seating and exclusively available on long-wheelbase models.

In a development program costing $400 million,[6] engineers used an erector set to initially help visualize the complex interaction of the design[7] and redesigned underfloor components to accommodate the system — including the spare tire well, fuel tank, exhaust system, parking brake cables, rear climate control lines, and rear suspension.[7] Even so, the new seating system precluded incorporation of an AWD system, effectively ending that option for the Chrysler minivans.

The system in turn creates a combined volume of 12 cubic feet (340 L) of under floor storage when second row seats are deployed. With both row folded, the vans have a flat load floor and a maximum cargo volume of 160.7 cubic feet (4,550 L).[8][6]

The Stow 'n Go system is not offered on the Volkswagen Routan, a rebadged nameplate variant of the Chrysler minivans.

Chrysler introduced a seating system in 2008, marketed as Swivel'n Go. In the system, the two second row seats swivel to face the third row. A detachable table can be placed between the second and third row seats. Swivel'n Go is not available with Stow 'n Go seating. The Swivel 'n Go system is offered on the Dodge Caravan and Chrysler Town and Country, but not the Volkswagen Routan, a rebadged nameplate variant of the Chrysler minivans.

The system is noted for its high strength[citation needed]. The entire load of the seat in the event of a crash is transferred through the swivel mechanism, which is almost twice as strong as the minimum government requirement.[citation needed]

The swivel mechanism includes bumpers that stabilize the seat while in the lock position. When rotated the seat come off these bumpers to allow easy rotation.

The seat is NOT meant to be left in an unlocked position or swiveled with the occupant in it, although this will not damage swivel mechanism.