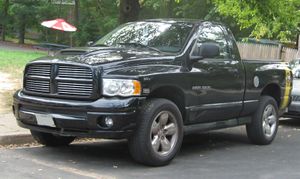 The Dodge Ram Rumble Bee is the truck remake of the Dodge Super Bee. It bears the bumble bee stripe that is similar to the one that can be found on the old Dodge Super Bee, Charger, and Challenger. This was a limited edition remake, and was only made available in 2004 and 2005 (Second Swarm).

The Dodge Ram Rumble Bee uses the 5.7 Liter Hemi V-8 Engine producing 345 horsepower at the crank. There were only approximately 5000 made per year (04 and 05)nn

The exterior of the Dodge Ram Rumble Bee only comes in two colors: black or yellow. It bears the symbol of a Bee that can be found on past Dodge Bee edition cars. The stripe that runs down the back end of the bed side has a logo in the middle depicting a Bee on wheels. The hood is decorated with a non-functional hood scoop, and "Sport" fascia.