The Dodge B-series was a full-sized passenger and utility van built by Chrysler Corporation, which replaced the previous smaller A-series compact vans. Dodge followed the lead of the Ford Econoline by moving the engine ahead of the front seats under a short hood, and using truck components. The compact vans were sized to compete with the Volkswagen transporter, with a flat front, the engine was placed between and behind the front seats, and they were based on components from compact cars.

For the first eight model years, the different configurations were given names. Sportsman passenger vans had side windows and passenger seating not present in the otherwise identical Tradesman models. These vans were also marketed as Plymouth Voyagers prior to the 1984 application of the Voyager name to Plymouth's new minivan, as well as being marketed under the "Fargo" name until 1972. The same range of gasoline-powered slant-6 and V8 engines was offered in these vans as was offered in the Dodge D Series pickup truck.

The Sportsman, Tradesman, and Adventurer names were phased out after 1980, replaced with simple B-series identifiers. As with the D-series trucks, B100 and B150 models were 1/2-ton rated, B250 models were 3/4-ton, and B350s were one-ton. Over the 31-year production run of these vans, the front-end styling was given two major and four minor updates, with the engine being moved successively forward under longer hoods, while the rear-end styling was revised twice. However, the body shell and most fixtures would be one of the longest running of any US vehicle, remaining nearly identical from the vans' introduction in 1971 through their discontinuance in 2003, while Ford and GM would go through two or three generation platform redesigns. In the 1980s, the Dodge vans were the only ones to feature rear quarter glass that wrapped around to the rear of the van, which reduced the driver's blind spots compared to the Ford and GM vans.

Little changed on Dodge vans produced between 1971 and 1977, with only minor styling changes to the grille area. 1979 was the first year for what is referred to as the "late" Dodge van. It was the biggest single change in the van's 31 year run. While the power train remained largely unchanged, the front end styling and interior were changed significantly. 1978 was a transition year for B series vans, and replaced in 1979 by the Dodge Ram Van. Some 1978 model year vans contain styling cues from the 1977 and earlier vans, and some contain the 1979 and later front end. All 1978 model year vans have interiors that are more similar to 1979 and later vans.

Dodge first pioneered the extended-rear 15-passenger van favored by school and church groups and dominated it until overtaken by Ford in the 1990s. It offered a sliding side door, and also a unique side-swinging tail door with a full-width window. 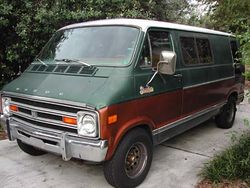 Dodge vans, particularly Tradesman vans from the 1971-1977 model years, were very popular as the basis for many custom vans during the custom van craze that occurred during the mid to late 70s and early 80s. Dodge capitalized on this craze, creating a factory customization package called the "Street Van" package. This was advertised alongside the Lil' Red Express and Warlock trucks as "Adult Toys". The Street Van package consisted of a "Street Van" logo on the passenger and driver's side door in lieu of the Tradesman logos, chrome trim on the grille and windshield, simulated wood grain inlays in the steering wheel horn cover and passenger side glare shield, five slot chrome rims or white spoked "off-road" type rims, chrome front and rear bumpers, chrome trim on the gauges, smaller chrome side view mirrors, patterns and plans to create custom interiors, and membership in the "Dodge Van Clan". This package was available from the 1976 model year until it was discontinued in the early '80s. This was not an overly-popular option from the factory, and Street Vans are somewhat rare. The chrome metal Street Van emblems found on later Street Vans (emblems through mid-1978 were stickers) in good shape are quite valuable to collectors or restorers.

The name "Kary Van" comes from the cube shape of the cargo section of the van. Dodge used the van body for the front end of its 1973-1978 cube-vans usually with dual rear axels and heavy-duty 1-Ton suspensions. Many examples of these cube-vans still roam the streets today because they were usually owned and well-maintained by companies with cash to make repairs and by the time companies sold them, they remained on the road with private owners for many years after. Similarly, many Ford E-Series and Chevrolet Vans from 15+ years ago still roam the streets as well.