The Eagle Talon was one of three model names given to a sports coupe that was manufactured between 1989 and 1998 and sold by the then Chrysler Corporation and Mitsubishi Motors of Japan in a joint 50/50 corporate venture known as Diamond-Star Motors (DSM). The Talon was sold under the Eagle marque, a brand developed by Chrysler to compete with Japanese imports in the late 1980s after purchasing American Motors in 1987. The other two sister models were the Eclipse (sold by Mitsubishi) and the Laser (sold by Plymouth, another Chrysler brand). Note that both the "Eagle" and "Plymouth" brand names have since been discontinued.

All three vehicles were built on the same platform at the DSM manufacturing plant in Normal, Illinois. All three vehicles were mechanically identical (when comparing the same option level) including engine, transmission, and drivetrain. Cosmetically, differences between the three were found in wheels, availability of colors, tail lights, front and rear bumpers, and spoilers. The primary way to establish the identity of an Eagle Talon is its two-tone body color - the 'greenhouse' (roof, pillars, door-mounted mirrors) was always black regardless of the body color (Note: 1G Eclipses with a 2.0 L engine also have black 'greenhouse' roofs). The basic characteristics of the Eagle Talon are:

The first generation Talon was released in mid-1989 as a 1990 model and ran through 1994. This era of DSM vehicles is commonly referred to as the first generation, or "1G" for short. However, there were two 1G styles. The "1GA" models of 1990-1991 featured pop-up headlights lights and a "6-bolt" engine, while the "1GB" model of 1992-1994 featured composite style headlights with integrated turn signals.

The 1993-1994 base model DL was front-wheel drive and used a 92-horsepower 1.8 L engine (4G37). The ES model (or just the base Talon before 1993) sported a naturally aspirated 2.0 L 135 hp Mitsubishi 4G63 engine. The TSi and TSi AWD models used the same engine but added an intercooled Mitsubishi 14b turbocharger producing 11.06 psi of peak boost from the factory, resulting in 195 horsepower on TSi AWD models. The front-drive TSi produced only 190 due to a more restrictive exhaust system, and the automatics produced 180 due to a 13g turbo.

The Eagle Talon was consistently featured on Car and Driver magazine's Ten Best list for 1990-1992. 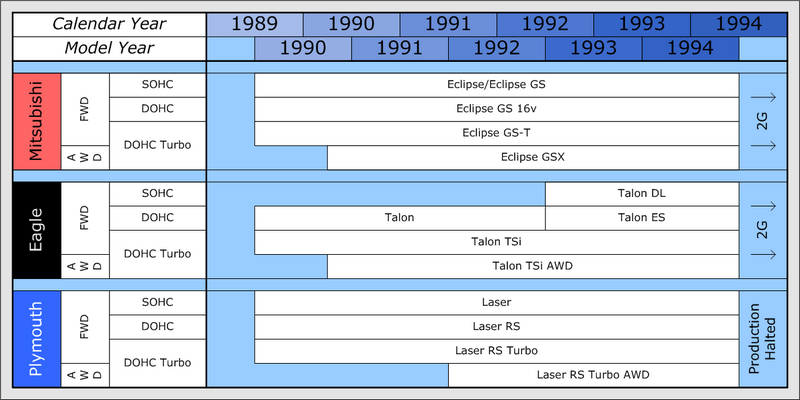 The second generation Eagle Talon was introduced in 1995 simultaneously with its Mitsubishi Eclipse counterpart, while the Plymouth Laser model was eliminated. Mechanically, the new Talon and Eclipse models were almost identical with the engines in the turbocharged versions receiving a modest increase in output thanks to a redesigned intake and exhaust and new turbocharger. The new T25 turbocharger, provided by Garrett, had boost increased to 14 psi of peak boost and was smaller than the previous Mitsubishi built 14b turbo that was on 1G models. The T25 did spool up faster than the previous turbocharger in order to increase the turbo response or reduce turbo lag. The other important change concerned the suspension. While the 1G had struts in the front, the 2G had double-wishbone at all four corners. This gave the 2G a much better roll-camber curve in the front, allowing for much better handling. 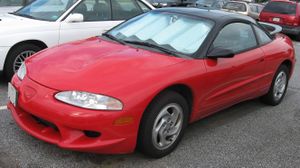 From an aesthetic standpoint, the differences between the Eagle Talon car and its Mitsubishi equivalent were somewhat more substantial than exhibited in the first generation models. These differences were most obvious at the rear of the car. For example, the rear fascia of the Talon featured a bumper cap with a dip in the middle to allow for a high-mounted rear license plate; rear light clusters incorporating amber turn signals (the Eclipse used red turn signals); reverse lights as part of the main rear tail light clusters (the Eclipse's reverse lights were mounted separately and lower around the mid-mounted license plate); and a sickle-shaped rear spoiler for the TSi and TSi AWD version mounted at the base of the rear window that was painted black regardless of body color (the Eclipse used a body colored, conventional "basket handle" spoiler mounted on the rear deck). Other differences included the air intake beneath the front bumper, which did not have a body-colored splitter (minor difference), and the absence of side skirts. Also, the hard-top Talon featured a black roof while the Eclipse had a body colored top. 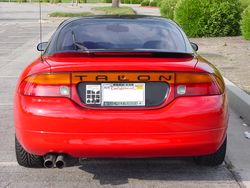 For model year 1997, a design update occurred for both the Talon and the Eclipse that is sometimes referred to as "2Gb". The update was primarily limited to the non-metal portions of the car. The front and rear fascias were heavily revised to incorporate more aggressive looking features. At the front, a larger air intake was created and the "Eagle" emblem was enlarged and embossed into the center of the bumper cap (as opposed to a badge that inset into a similarly shaped hole). At the rear, a new high-mount spoiler was introduced that projected further into the airstream, replacing the flush-mounted sickle spoiler. Added plastic moldings on the bumper caps and doors completed the revisions to the body. Lastly, on the TSi and TSi AWD models the aluminum wheels where increased to 17 inch rims and incorporated more angles replacing the 16 inch curved 5-spoke wheel. Another important, non-cosmetic change concerned the driveline. There was a slight change in gear ratios and the number of splines on the shaft feeding power to the transfer case was altered.

The TSi and TSi AWD models again featured an intercooled turbocharged engine, now replacing the 1G Mitsubishi turbo with a Garrett T25 model. Although the T25 was a smaller turbo, it spooled faster at a lower RPM resulting in increased low end acceleration performance. The TSi AWD model retained the All Wheel Drive drivetrain system.

End of the Talon

By November of 1998, the Talon was the last model in the declining Eagle lineup and the rarest Talon model year. A concept car called the Eagle Jazz was produced, which bore a strange resemblance to a 4-door Eagle Talon, however amid declining sales, Chrysler chose to stop promoting the Eagle brand and in 1998 stopped production of the Eagle Talon. The Eagle Jazz concept later resurfaced in the second-generation Chrysler Concorde.

The TSi nameplate, appeared on Jeep's Grand Cherokee for the 1997 and 1998 model year. The model, which was the sportier among the Jeep Grand Cherokee line-up (with the exception of the 5.9 Limited) featured trim reminiscent of Talon's TSi model, and featured the same Indigo blue trim and monochromatic scheme found on the Talon. The TSi reappeared once again, as a high-performance model for the Chrysler Sebring sedan, for the 2005 and 2006 year models.