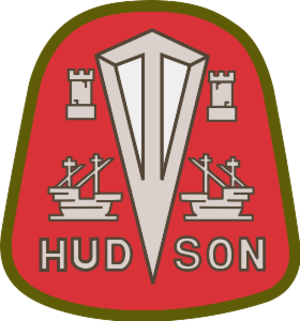 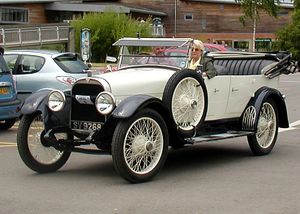 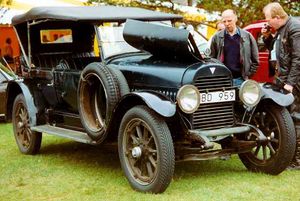 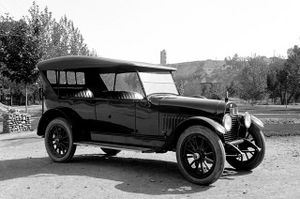 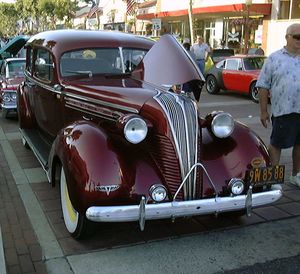 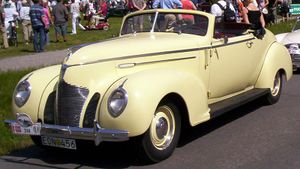 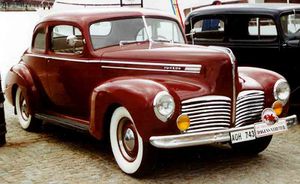 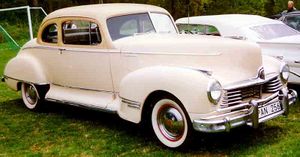 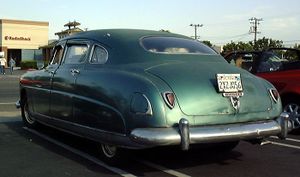 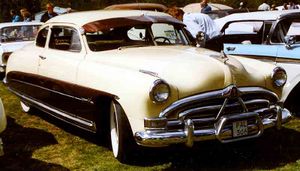 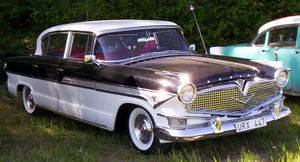 The Hudson Motor Car Company made Hudson and other brand automobiles in Detroit, Michigan, from 1909 to 1954. In 1954, Hudson merged with Nash-Kelvinator Corporation to form American Motors. The Hudson name was continued through the 1957 model year, after which it was dropped.

The name "Hudson" came from Joseph L. Hudson, a Detroit department store entrepreneur and founder of Hudson's department store, who provided the necessary capital and gave permission for the company to be named after him. A total of eight Detroit businessmen formed the company on February 24, 1909, to produce an automobile which would sell for less than US$1,000. One of the chief "car men" and organizer of the company was Roy D. Chapin, Sr., a young executive who had worked with Ransom E. Olds. (Chapin's son, Roy Jr., would later be president of Hudson-Nash descendant American Motors Corp. in the 1960s). The company quickly started production, with first car driven out of a small factory in Detroit on July 3, 1909. The new Hudson "Twenty" was one of the first low-priced cars on the American market and very successful with more than 4,000 were sold the first year. This was the best first year's production in the history of the automobile industry up to that time.

The company had a number of firsts for the auto industry; these included dual brakes, the use of dashboard oil-pressure and generator warning lights, and the first balanced crankshaft, which allowed the Hudson straight-6 engine, dubbed the "Super Six" (1916), to work at a higher rotational speed while remaining smooth, developing more power for its size than lower-speed engines. Most Hudsons until 1957 had straight-6 engines. The dual brake system used a secondary mechanical parking brake system, which activated the rear brakes when the pedal traveled beyond the normal reach of the primary system; a mechanical emergency brake was also used. Hudsons transmissions also used an oil bath and cork clutch mechanism that proved to be as durable as it was smooth.

At its peak in 1929, 300,000 cars were produced in one year, Hudson and Essex combined, including contributions from Hudson's other factories in Belgium and England; a factory had been built in 1925 in Brentford in London.[1]. Hudson was the third largest U.S. car maker that year, after Ford Motor Company and Chevrolet.[1]

In 1919 Hudson introduced the Essex brand line of automobiles; the line was originally for budget minded buyers, designed to compete with Ford and Chevrolet, as opposed to the more up-scale Hudson line. The Essex found great success by offering one of the first affordable sedans, and combined Hudson and Essex sales moved from seventh in the U.S. to third by 1925.[2]

In 1932, Hudson began phasing out its Essex nameplate for the modern Terraplane brand name. The new line was launched on July 21, 1932, with a promotional christening by Amelia Earhart. For 1932 and 1933, the restyled cars were named Essex-Terraplane; from 1934 as Terraplane, until 1938 when the Terraplane was re-named the Hudson 112. Hudson also began assembling cars in Canada, contracting Canada Top and Body to build the cars in their Tilbury, Ontario, plant. In England Terraplanes built at the Brentford factory were still being advertised in 1938.[3].

An optional accessory on some 1935-1938 Hudson and Terraplane models was a steering column-mounted electric gear pre-selector and electro-mechanical automatic shifting system, known as the Electric Hand, manufactured by the Bendix Corporation. This took the place of the floor-mounted shift lever, but required conventional clutch actions. Cars equipped with Electric Hand also carried a conventional shift lever in clips under the dash, which could be pulled out and put to use in case the Electric Hand should ever fail. Hudson was also noted for offering an optional vacuum-powered automatic clutch, starting in the early 1930s.

In 1936, Hudson revamped its cars, introducing a new "radial safety control" / "rhythmic ride" suspension which suspended the live front axle from two steel bars, as well as from leaf springs. Doing this allowed the use of longer, softer leaf springs ("rhythmic ride"), and prevented bumps and braking from moving the car off course. The 1936 Hudsons were also considerably larger inside than competitive cars — Hudson claimed a 145-cubic-foot (4.1 m3) interior, comparing it to 121 cubic feet (3.4 m3) in the "largest of other popular cars." (According to United States Environmental Protection Agency (EPA) measurements, the cavernous Chrysler LHS only reached 126 ft3.) With the optional bulging trunk lid, the Hudsons could store 21 cubic feet (0.59 m3) of luggage (the LHS, 19 ft3), though that might have been an optimistic measurement. The 1936 engines were powerful for the time, from 93 hp (69 kW) to 124 hp (92 kW). The 1939 models joined other American cars in the use of a column-mounted gearshift lever. This freed front-seat passenger space and remained the industry standard through the 1960s, when "bucket seats" came into vogue. For 1940 Hudson introduced independent front suspension and true center-point steering on all its models, a major advance in performance among cars in this price range. In 1942, perhaps in response to General Motors' Hydra-Matic automatic transmission, Hudson introduced its "Drive-Master" system. Drive-Master was a more sophisticated combination of the concepts used in the Electric Hand and the automatic clutch. At the touch of a button, Drive-Master offered the driver a choice of three modes of operation: (1) Ordinary, manual shifting and clutching; (2) Manual shifting with automatic clutching, and (3) Automatic shifting with automatic clutching. All this was accomplished by a large and very complicated mechanism located under the hood. They worked quite well, and in fully automatic mode served as a very good semi-automatic transmission. When coupled with an automatic overdrive, Drive-Master became known as Super-Matic. Drive-Master was offered by Hudson through the 1950 model year. In 1951, when General Motors made its Hydra-Matic available to all other carmakers, Hudson replaced Drive-Master and Super-Matic with Hydra-Matic.

As ordered by the Federal government, Hudson ceased auto production from 1942 until 1945 in order to manufacture war materiel during World War II, including aircraft parts and naval engines, and anti-aircraft guns. The Hudson "Invader" engine powered many of the landing craft used on the D-Day invasion of Normandy, June 6, 1944.

In 1948 the company launched their "step-down" bodies, which lasted through the 1954 model year. The term step-down referred to Hudson's placement of the passenger compartment down inside the perimeter of the frame; riders stepped down into a floor that was surrounded by the perimeter of the car's frame. The result was not only a safer car, and greater passenger comfort as well, but, through a lower center of gravity, an extremely well-handling car. In time almost all automakers would embrace it as a means of building bodies. Automotive writer and authority Richard Langworth has written glowingly of the early step-down models stating that "they're one of greatest" autos of the era in articles for Consumer Guide and Collectible Automobile.

Hudson's strong, light-weight bodies, combined with its high-torque inline six-cylinder engine technology made the company's 1951-1954 Hornet an auto racing champion, dominating NASCAR in 1951, 1952, 1953, and 1954. Some NASCAR records set by Hudson in the 1950s (e.g. consecutive wins in one racing season) still stand even today. Later, these cars met with some success in drag racing, where their high power-to-weight ratio worked to their advantage. Hudsons enjoyed success both in NHRA (National Hot Rod Assoc.) trials and local dirt track events well into the 1960s. (Today, Hudsons continue to set top-speed records in their class at the Bonneville Salt Flats.)

Like many other smaller North American auto manufacturers, Hudson found it increasingly difficult to compete with the Big Three (Ford, GM and Chrysler) during the 1950s. Those large companies could afford constant development and styling changes, so that their cars looked fresh every year, whereas the smaller manufacturers could only afford gradual change. Hudson's once innovative "step-down" unit body construction, while sturdy and innovative, also made restyling difficult and expensive. After the company's high-priced and unattractive (thus ill-fated) Jet compact car line failed to capture buyers in its second straight year, Hudson was "acquired" by Nash-Kelvinator (makers of Nash and Rambler) automobiles in 1954.

On January 14, 1954, Hudson merged with Nash-Kelvinator Corporation to become American Motors. The Hudson factory in Detroit, Michigan was converted to military contract production at the end of the model year, and the remaining three years of Hudson production took place in Kenosha, Wisconsin.

For 1955, both Hudson and Nash senior models were built on a common automobile platform using styling themes by Pinin Farina, Edmund E. Anderson, and Frank Spring. (Common-body shell production for competing makes of automobiles is a manufacturing technique used by the Big Three for decades.) Although the 1955 Hudson used the inner body shell of the Nash, the car incorporated a front cowl originally designed by Spring and the Hudson team to be put on the 1954 Step-Down platform. The 1955s also used the Hudson dashboard, "triple safe brakes" and Nash Weather Eye heater with Harrison-supplied lower cost freon/compressor type air conditioning.

Hudson dealers also sold Rambler and Metropolitan models under the Hudson brand. When sold by Hudson dealers, both cars were identified as Hudson vehicles via hood/grille emblems and horn buttons. Hudson Ramblers also received "H" symbols on fuel filler caps (and, in 1956, also on hubcaps). For 1957, Rambler and Metropolitan became makes in their own rights, and no longer were identified as Hudson or Nash.

For 1956, design of the senior Hudsons was given over to designer Richard Arbib, which resulted in the "V-Line" styling motif, a combination of "V" motifs that carried Hudson’s triangular corporate logo theme. Sales fell below 1955 figures. For 1957, Hudson dropped the shorter-wheelbase Wasp line, selling only the Hornet Custom and Super, which featured a lowered profile and slightly updated styling.

With a wider front track than Nash used, Hudson was the better handling car, and was powered by the famed 308 (5.1L) Hornet Six with the optional high-compression cylinder head and dual-carburetor manifold ("Twin-H Power"). The Wasp used the 202 cu in (3.3 L) L-head Jet Six engine (up to 130hp) and this model (in sedan version) was Hudson's top seller. For 1955, for the first time Hudson offered a V8 engine, a 320 cu in (5.2 L) powerplant rated at 208 hp (155 kW) and built for Hudson and Nash by Packard. All cars with the Packard V8 also used Packard's Ultramatic automatic transmission.

The last Hudson rolled off the Kenosha assembly line on June 25, 1957. There were no ceremonies, because at that point there was still hope of continuing the Hudson and Nash names into the 1958 model year on the Rambler chassis as deluxe, longer-wheelbase senior models. One major trade magazine said that rumors of discontinuance were false and that the 1958 Hudsons and Nashes "would be big and smart".

AMC President George W. Romney came to the conclusion that neither Hudson nor Nash brand names had as much positive market recognition as the successful Rambler. The decision to retire the Hudson (and Nash) brand names came so quickly that preproduction photographs of the eventual 1958 Rambler Ambassador show both Nash and Hudson badged and trimmed versions of the car.

Eventually, however, something close to the Hudson design was chosen for the 1958 Rambler Ambassador. Hudson fans will note the triangular grille guard and 1957-like fender "gun sights" and the fast-selling 1958 Rambler Customs wore 1957 Hudson-styled front-fender trim.

The last Hudson dealership in the world was Miller Motors in Ypsilanti, Michigan. It is now the Ypsilanti Automotive Heritage Museum, part of the Motor Cities Automotive National Heritage Area. A fine collection of restored Hudsons, including the original Fabulous Hudson Hornet, and other area production cars can be found at the museum.

In 1970, American Motors Corporation (AMC) revived the "Hornet" model name for its new series of compact cars (the AMC Hornet). AMC was later bought out by Chrysler Corporation, who are considering reintroducing the Hornet name in the Dodge production line (See: Dodge Hornet and official Dodge information [2]).