See also Jeep Cherokee for other models using this name

The Jeep Cherokee (XJ) was a monocoque (unibody) compact SUV. It shared the name of the original full-size SJ model, but having no true pickup truck heritage, it actually set the stage for the modern SUV. Its innovative appearance and sales popularity spawned important imitators as other automakers began to notice that this model began replacing regular cars.[1] It was built in Toledo, Ohio in the United States and in Beijing, China. The XJ platform provided the mechanical basis for the MJ-series Jeep Comanche pick-up.

The XJ was selected by Robert Cumberford of Automobile Magazine as one of the 20 greatest cars of all time, calling it "possibly the best SUV shape of all time, it is the paradigmatic model to which other designers have since aspired."[2]

The XJ Cherokee was introduced in 1984 as the first unibody Jeep. Designs of the XJ Cherokee date back to 1978 when a team of American Motors (AMC) and Renault engineers drew several sketches. A few clay models were based on the existing SJ Cherokee. Early sketches of the XJ Cherokee had an European influence, and most of the styling cues were done by AMC engineers. The ongoing debate suggests that Renault sketch artists were involved right after the 1979 partnership with AMC.[citation needed] Noticing that General Motors was developing a new two-door S-10 based Blazer, AMC decided to design an entirely new four-door model, but worried about rollovers Gerald C. Meyers hired one of Ford's best engineers, Roy Lunn to design what is known as the Quadra-Link suspension.[3] François Castaing developed the drivetrain using a much smaller engine than normally found in 4WD vehicles and reduced the weight of the new model,[4]

Both two- and four-door versions of the XJ Cherokee were offered throughout its lifetime, each having exactly the same track and wheelbase measurements. Two-door models, however, received longer doors and front seats that could fold forward to assist in rear passenger entry and exit. This was in addition to extended-length rear windows that did not open, although an optional rear vent window was available on some models. Its appearance has led some to mistakenly believe that the two-door models are a short wheelbase version of the four-door.

American Motors's compact XJ Cherokee was to be replaced by a new and larger model known as the XJC (later named the Jeep Grand Cherokee when introduced in 1993) that was under development by AMC.[5] However, the smaller model's continuing popularity caused Chrysler executives, as the new owners of AMC, to rethink this decision. The Jeep XJ has remained a popular choice by off-roading enthusiasts due to its potent off-roading capability in stock form. Its popularity has resulted in strong ongoing aftermarket support in the form of a wide variety of products and upgrade availability.

After 13 years of production, 1997 saw the Cherokee receive updated exterior and interior styling. Both the two- and four-door bodies remained in production, receiving a steel tailgate (replacing the fiberglass one used previously),a new taillight design, additional plastic molding along the doors, as well as a new front header panel that featured more aerodynamic styling; the interior was similarly updated with an all-new design and instruments, and a stiffer unibody frame brought improvements to Noise, Vibration, and Harshness measurements. In the middle of the 1999 model year, vehicles with the 4.0 liter engine received a much improved intake manifold. This was done to help counteract smaller exhaust porting on the latest casting of cylinder heads, which was done to meet more stringent emissions control laws. Both the 4- and 6-cylinder engines were offered through the 2000 model year, though only the straight-six was available in 2001. For the 2000 and 2001 model years, all six-cylinder XJs received a distributorless ignition system using coil-on-plug ignition replacing the 'traditional' system previously used; coupled with better exhaust porting and the newer intake manifolds, this gave a minor increase in power over the previous models. Transmission, axle, and transfer case choices were carried over from the previous models.

However, major changes were underway with a new executive, Wolfgang Bernhard, who was "known as a cost-slasher" nicknamed "whirlwind", came from Mercedes-Benz to turn around Chrysler.[6][7] "One of the first moves Bernhard made when he came to Chrysler in 2000 was to help kill the Jeep Cherokee, an aging somewhat bland SUV."[8] Thus, the (XJ) Cherokee line was replaced in 2002 by the Jeep Liberty (KJ) , although it is called the "Cherokee" in most foreign markets.

When (XJ) Cherokee production ended in mid 2001, the portion of the Toledo South Assembly Plant devoted to its production was slowly torn down.

All the transfer cases used on the Cherokee were chain driven with aluminum housings. Command-Trac was standard on XJ models built with 4WD.

The Jeep XJ utilizes front and rear solid (live) axles as opposed to independent front and/or rear axles. This configuration allows the XJ to have superior off-road capability and performance at the expense of some on-road comfort and drivability.

Note: Dana 44 rear ends came with manual transmissions with the towing packages in 1987.

The Jeep XJ utilizes the Quadra-Link front suspension. This suspension design locates the axle with four control arms to control up and down movement, two above the axle and two below it. A panhard rod, also referred to as a track bar, is used to locate the axle central to the vehicle. Two coil springs are seated on top of the axle housing as well as two gas-charged shock absorbers. A sway bar is utilized to reduce body roll in turns.

The XJ uses a leaf spring rear suspension. Each leaf pack contains four leaf springs with a fixed eye at the front of the spring and a shackle at the rear of the spring. Two gas-charged shock absorbers are also used, along with a mild anti-sway/anti-roll bar. The suspension used on vehicles with the optional UpCountry Package did not employ the rear anti-sway/anti-roll bar and provided one inch of lift over the standard suspension. 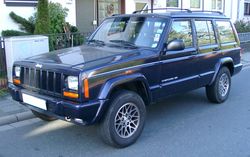 A van version of the XJ was offered in addition to the standard vehicles in some European markets. Available in both right- and left-hand-drive models, they were designed to comply with relaxed motor tax regulations in some EU member states governing vehicles intended for primarily commercial use. Both two- and four-door versions are known to have been sold, with the main differences from the standard models being metal panels in place of the rear side windows, no rear seats, and a completely flat cargo area. Two- and four-wheel-drive variants were available, powered by the VM Motori 2.5-litre diesel engine mated to the Aisin AX-5 manual transmission. Photographs of this model can be found here. 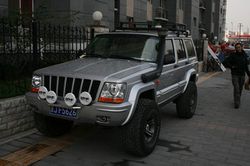 American Motors established the first automobile manufacturing joint venture in the People's Republic of China to assemble the four-door Cherokee[9]. Production continued after Chrysler's buyout of AMC. Chrysler executives were concerned over licit and illicit technology transfers when knock-offs of the Cherokee began appearing in the Chinese market.[10] Production under Mercedes-Benz continued in the partnership that was renamed Beijing-Benz DaimlerChrysler Automotive. The most recent model with an updated grille, headlights, and other upgrades is known as the "Jeep 2500" that was produced through 2006.[11] It is notable that AMC's original Cherokee design continued to sell virtually unchanged after over twenty years.