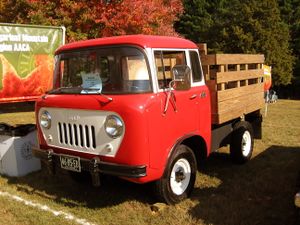 The Jeep Forward Control is a truck that was produced by Willys and then Kaiser Jeep from 1956 to 1965. It was also assembled in other international markets. The layout featured a cab forward, also known as cab-over-engine (COE) design.

The Forward Control models were primarily marketed as work vehicles for corporate, municipal, military, as well as civilian use. Regular pickup box beds were standard, but customers were offered a large number of "Jeep approved" specialized bodies from outside suppliers. These ranged from simple flatbeds to complete tow trucks, dump trucks, and fire trucks.

Proposals included a "Forward Control Commuter" design that could have been among the earliest minivan-type vehicles. Three operational concept cars were built by Reutter in Stuttgart, West Germany. Brooks Stevens was also involved in the transformation of this truck platform into a passenger vehicle.[1] 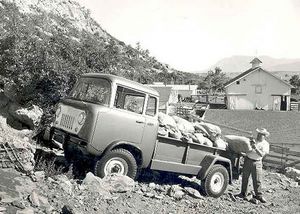 Aside from Forward Control Jeeps being built for civilian use there were also four models manufactured for the military.

Numerous versions of FC models (most not available in the domestic market) were manufactured in many other nations under collaboration agreements with successive owners of Jeep: Willys Overland, Kaiser Jeep, and American Motors (AMC).

Mahindra & Mahindra Limited in Bombay (Mumbai), India began its vehicle business in 1947 by assembling Complete knock down (CKD) Jeeps.[3] It started FC-150 production in India in 1965 and later expanded the model range for the domestic market to include the FC-170, as well as its own intermediate sized FC-160.

The FC-160 (and later FJ-160) uses a 233 centimeters (91.7 in) wheelbase. The pick-up box was by Mahindra and other bodies were available. The "cowl and chassis only" FC-160 model was popular during the 1970s for conversion into mini-buses, ambulances, and other vehicles. Most have the basic front face of the FC. Manufacture of the Mahindra FC-160 pickup truck ended in the summer of 1999.

The FC-260 Diesel light truck was introduced in 1975. Currently, Mahindra's FJ-460 (introduced in 1983) and FJ-470 van or mini-bus vehicles retain the grille arrangement of the original Forward Control. These vehicles can accommodate from 11 to 15 passengers plus the driver.[4] 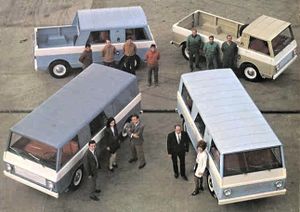 The Jeep "SV" line of Forward Control vans made in Spain

In the 1960s, Kaiser-Willys licensed VIASA (Vehículos Industriales y Agrícolas, S.A.) to build Jeeps in Spain. During the late-1970s, VIASA was absorbed by Ebro trucks (a division of Motor Iberica). The "SV" line of commercial trucks were built using a Jeep chassis, just like the FC models in the USA. The unique Iberian models included the Campeador (one-ton pickup), Duplex (double cab pickup), Furgon (one-ton van), and the Toledo (9-seat van). Two engines were available: the Super Hurricane in-line six or a Perkins 4-cylinder diesel.