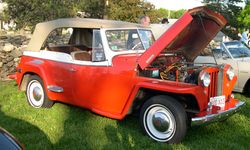 The original Jeepster ("VJ" internally) was produced from 1949 through 1950, although some leftover models were sold under the 1951 model year. After World War II, Jeep trademark owner, Willys, believed that the market for the military-type Jeep would be limited to farmers and foresters, therefore they began producing the "CJ" (or Civilian Jeep) to fill this growing segment as well as producing the new Jeep Wagon in 1946, and then the Jeep Truck in 1947.

Realizing a gap in their product line up, Willys developed the Jeepster to crossover from their "utilitarian" type truck vehicles, to the passenger automobile market. The car was originally only offered with rear-wheel drive, thus limiting its appeal with traditional Jeep customers. While its distinctive boxy styling (created by industrial designer Brooks Stevens) was a hit with critics, it did not catch on with the intended market segment. Sales were also limited by sparse advertising. In the end, 19,132 original VJ Jeepsters were produced (1948 - 10,326; 1949 - 2,960; 1950 - 5,836).[1]

The VJ Jeepster was powered by the 62 horsepower (46 kW) "Go Devil" engine, a 134 cu in (2.2 L) straight-4 also used in the CJ. A 3-speed manual transmission with optional overdrive was used, as were drum brakes all around. The vehicle's front end and single transverse leaf spring suspension, was from the Willys Station Wagon, as was the rear driveline. The flat-topped rear fenders were copied from the Jeep truck line, as were the pair of longitudinal rear leaf springs. 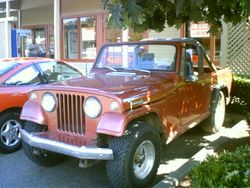 There are several unique body styles of the Jeepster Commando: Station wagon/SUV, Convertible, Pickup, and roadster. One unusual offering was the deluxe station wagon, with sliding rear windows and full interior trim. In rare cases, these models were finished with a two-tone exterior.

The 1971 Hurst Jeepster built with modifications by Hurst Performance is possibly the scarcest model of all production Jeeps.[2] Standard equipment included a Champagne White exterior with red and blue stripes, a roof rack, a sports steering wheel, and Goodyear G70 x 15 raised white letter tires mounted on wider steel wheels. Hurst equipment included special exterior insignia, an 8,000-rpm tachometer on the back of the hood scoop in the driver's line of sight, as well as a Hurst T-handle shifter on manual-transmission cars or a console-mounted Hurst Dual-Gate shifter with the optional automatic transmission.[2] 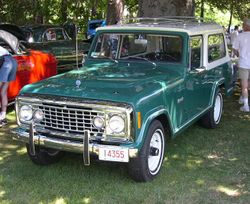