The Jeep Wagoneer was an early sport utility vehicle (SUV), produced under varying marques from 1963 to 1991. It was noteworthy for being in production for more than 28 years with only minor mechanical changes. An overhead cam engine, along with independent front suspension (both later discontinued), supplemented with features unheard of in any other 4WD vehicle (including power steering and automatic transmission), made it revolutionary at the time. A solid front axle was available as well. Compared with offerings from International Harvester and Land Rover — which were producing utilitarian work-oriented vehicles that were quite spartan and truck-like on the inside — the Wagoneer was the first true luxury 4x4.[1] The Wagoneer is based on the Jeep SJ platform. It debuted seven years (24 years in the United States) before the Land Rover Range Rover. It was also one of the last few vehicles sold in the United States that still used a carburetor, well after most other vehicles had switched to fuel injection. Only Isuzu with its base-model pickup truck would hold out longer, selling its last carbureted vehicle in 1993.

The Willys and Kaiser years

Conceived in the early 1960s while Willys Motors was owned by Kaiser Industries, the Wagoneer replaced the original Jeep station wagon, which dated to 1946. With competition from the Big Three advancing on Jeep's four-wheel-drive market, Willys management decided that a new and more advanced vehicle was needed.

The new 1963 Wagoneer, like its long-lived predecessor (which would, in fact, be sold alongside its replacement in the U.S. until 1965), was designed by industrial designer Brooks Stevens. Willys' engineering staff, under the direction of A.C. Sampietro, handled the technical development. The cost of development was around US$20 million.[2]

The original Wagoneer was a full-size, body-on-frame vehicle which shared its architecture with the Jeep Gladiator pickup truck. It was originally available in two and four-door body styles, with the two-door also available as a panel truck with windowless sides behind the doors and double "barn doors" in the rear instead of the usual tailgate and roll-down rear window.

Early Wagoneers were powered by Willys' new "Tornado" SOHC 230 cu in (3.8 L) six-cylinder engine, which had debuted in 1962 as an option for Jeep's older-style station wagons. The engine developed 140 hp (104 kW) and was noted for being quite fuel-efficient for its day. However, the engine was not without its problems; cooling issues were fairly common. And, in higher-altitude locales, "pinging" was a problem, leading the company to introduce a lower-compression version of the Tornado that developed 133 hp (99 kW) for 1964.

In early 1963, Willys Motors changed its name to Kaiser Jeep Corporation. This was to associate Jeep in the public consciousness with Kaiser's family of companies, said company president Steven Girard. Early Wagoneers were powered by Willys' new 140 hp (104 kW)"Tornado" SOHC 230 cu in (3.8 L) inline six-cylinder engine, which had debuted in 1962 as an option for Jeep's older-style station wagons. Although quite fuel-efficient for its day, it was prone to cooling problems, and also “pinging" at higher altitudes, which led to the introduction of a lower-compression 133 hp (99 kW) version in 1964.

There were few other changes for 1964, except for the option of factory-installed air conditioning. 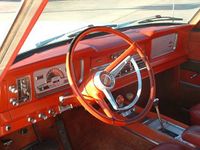 For 1965, the Wagoneer, together with the Gladiator pickup truck, was available with the 250 hp (186 kW) 327 cu in (5.4 L) AMC V8 engine, which proved a popular option. In 1966, the Tornado engine was replaced by American Motors' 232 cu in (3.8 L) OHV inline six. According to the automotive press this engine was smooth, powerful, reliable and easily-maintained.[citation needed] 1966 also saw the introduction of the more luxurious Super Wagoneer, initially with a higher-performance 270 hp (201 kW) version of the AMC V8, fitted with a four-barrel carburetor. With comfort and convenience features not found on other vehicles of its type at the time - e.g. push-button radio, seven-position tilt steering wheel, ceiling courtesy lights, air conditioning, power tailgate, power brakes, power steering, and console-shifted TH400 automatic transmission – the Super Wagoneer is now widely regarded as the precursor of today's luxury SUVs. It was made through 1969.

In early 1970 American Motors acquired Jeep and set about refining and upgrading the range. AMC also improved manufacturing efficiency and lowered costs by incorporating shared components such as engines. Reducing noise, vibration and harshness improved the Wagoneer driving experience. The outsourced Buick 350 was replaced by the 360 cu in (5.9 L) AMC V8, and later the 401 cu in (6.6 L) was made available. The innovative Quadra-Trac full-time four-wheel-drive system, which broadened the appeal of Jeep products to people who wanted four-wheel-drive traction without the inconvenience of a manual-shift transfer case and manual locking hubs, was introduced in 1973. In 1974 AMC resurrected the two-door Wagoneer as the Cherokee. This replaced the Jeepster Commando, whose sales had not met expectations despite an extensive 1972 revamp. The Cherokee appealed to a younger market than the Wagoneer, which was regarded more as a family SUV.

There were few styling changes during this time. However after introducing the Cherokee, AMC began to move the Wagoneer upmarket, culminating in the 1978 Wagoneer Limited, which brought critical acclaim[citation needed] and high demand from a new market segment. The Limited, more luxuriously equipped than the earlier Super Wagoneer, offered air conditioning, power-adjustable seats, power door locks, power windows, tilt steering wheel, cruise control, leather upholstery, plush carpeting and “wood grain” trim on the body sides. Even though the US$10,500 suggested retail price was in luxury Cadillac territory,[citation needed] the Limited’s high-level specification attracted buyers and sales were strong. With the V8s the primary choice among Wagoneer buyers, the 258 cu in (4.2 L) six-cylinder engine was dropped in the 1970s, only to return as an option when Jeep sales – particularly of the high-volume Cherokee – were hit by the 1979 fuel crisis. (The Wagoneer continued to sell relatively well.[citation needed]) When reintroduced, the engine came with manual transmission as standard equipment, but in 1983 automatic transmission with “Selec-Trac” four-wheel drive became standard. With this combination the Wagoneer achieved EPA fuel-consumption estimates of 18 mpg-US (13 L/100 km; 22 mpg-imp) city and 25 mpg-US (9.4 L/100 km; 30 mpg-imp) highway – outstanding for a full-size SUV.[3] This allowed the company to advertise good fuel mileage, although the more powerful 360 V8 remained popular with certain buyers despite its greater thirst for fuel.

The Wagoneer and Cherokee names were applied to the new, much-smaller and more fuel-efficient unibody XJ platform in 1984, but high demand prompted the company to keep the old SJ-body Wagoneer in production.

The full-sized Wagoneer Limited was renamed the Grand Wagoneer.

In mid-1984, Jeep introduced a less expensive version of the large "Grand" named the Wagoneer Custom. It did not have the simulated woodgrain exterior. Wheels were steel with hubcaps, and standard equipment was pared down. It had part-time four-wheel drive. Despite its lower price (US$15,995, about $3,000 less than the Grand), sales were poor.

The Grand Wagoneer remained "the gold standard of the SUV market" and it would continue in one version using the old SJ-body "for 1985 and beyond".[3]

Despite its advancing age the Grand Wagoneer remained popular. Instrument panel, grille, and taillamps were redesigned for 1986, followed by minor revision to the woodgrained sides in 1987, the year that ownership of the company passed to Chrysler Corporation. Chrysler largely left the Grand Wagoneer alone, and even continued to build the Grand Wagoneer with the carbureted AMC V8 instead of its own (and, arguably, more modern[citation needed]) fuel-injected V8s. Year-to-year changes were minimal; Chrysler added new features such as an overhead console taken from Chrysler's popular minivans and a rear-window wiper/washer system for 1989, but otherwise new model years through 1991 were marked only by new paint colors.

By the time production of the Grand Wagoneer ended, Jeep's flagship model contained parts from all of the Big Three automakers and those "adopted" by Chrysler from AMC: Chrysler transmissions (the A727 automatic), GM steering columns, light switches, and transmissions (Turbo-Hydramatic 400 during the 1970s), Ford carburetors and electronic engine controls, and AMC engine (the 360 V8).

The final 1,560 SJ Grand Wagoneers were produced in the 1991 model year. Each had a "Final Edition" badge on the dashboard. There have been (4) documented 1992 Grand Wagoneers, making these the most rare. 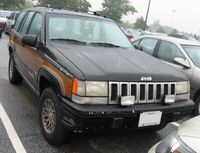 For 1993 Chrysler prepared the Jeep Grand Cherokee (originally designed by AMC) to replace both the discontinued flagship model and the smaller Cherokee. It had been delayed following Chrysler's purchase of AMC so Chrysler could redesign its hot-selling minivans[citation needed] for 1991.

Replacing the full-size Grand Wagoneer with a vehicle that was intended to retain the model's loyal buyers, Chrysler introduced the compact Grand Wagoneer ZJ in 1993. It was based on the new Grand Cherokee.

Powered by Chrysler's 220 hp (164 kW) 318 cu in (5.2 L) "Magnum" V8, th ZJ had model-specific faux woodgrain trim , model-specific, extra-padded leather seating and extra sound-deadening all standard. Jeep's 4wd "Quadra-trac" system was also standard. But it was smaller, offered less interior space, and lacked the familiar road presence of the original. Despite excellent reviews from many publications, sales did not warrant a return of the Wagoneer for the 1994 model year. It was discontinued after the single 1993 model year.

The Wagoneer was occasionally used in rallying, mainly in the United States. Wagoneers placed first and second in the first-ever running of the Sno*Drift rally in 1973.[citation needed]