The Knight Engine was an internal combustion engine, designed by Charles Yale Knight (1868-1940), that used sleeve valves instead of the more common poppet valve construction.

Born in Indiana in 1868, Knight was originally a printer and newspaper publisher, publishing a midwest farm journal called Dairy produce. To cover dairy activities during 1901-02, he bought an early Knox automobile, a three-wheeler with an air-cooled, single cylinder engine whose noisy valves annoyed him. He believed that he could design a better engine and proceeded to do so. Knight was familiar with the slide valves used on early Otto engines, having repaired the similar valve mechanism in his father's sawmill. The slide valve had however been replaced in gasoline engines by the poppet valve, whose characteristics were better suited to four-stroke engines.

At first Knight tried making the entire engine cylinder reciprocate to open and close the exhaust and inlet ports. Though he patented this arrangement, he soon abandoned it in favour of a double sliding sleeve principle. Backed by Chicago entrpreneur L.B. Kilbourne, an experimental engine was built in Oak Park, Illinois in 1903. Research and development continued until 1905, when a prototype passed stringent tests in Elyria, Ohio. Having developed a practicable engine (at a cost of around $150,000) Knight and Kilbourne showed a complete "Silent Knight" touring car at the 1906 Chicago Auto Show. Fitted with a 4-cylinder, 40 hp (30 kW) engine, the car was priced at $3,500.

Knight's design had two cast-iron sleeves per cylinder, one sliding inside the other with the piston inside the inner sleeve. The sleeves were operated by small connected rods actuated by an eccentric shaft and had ports cut out at their upper ends. The cylinder head (known as the "junk head") was like a fixed piston, with its own set of rings projecting down inside the inner sleeve. The heads were individually detachable for each cylinder. The design was remarkably quiet, and the sleeve valves needed little attention. It was, however, more expensive to manufacture due to the precision grinding required on the sleeves' surfaces, and it also used more oil at high speeds and was harder to start in cold weather.[1]

The engine's design allowed a more central location for the spark plugs, large ports for better gas flow, and hemispherical combustion chambers that in turn gave increased power. In addition, the sleeve valves required much less maintenance than poppet valves, which needed adjustment, grinding, and even replacement after a few thousand miles.

Knight and Kilbourne had hoped to interest US automobile manufacturers in the engine so that they could grant licences for its manufacture, but initially there were no takers. Pierce-Arrow of Buffalo, New York, tested the engine against one of their own and found that it was more powerful at speeds above 30 miles per hour (48 km/h) and would also go faster, but dismissed it as unsuitable for their range of cars because they believed that anything over 55 miles per hour (89 km/h) was unsafe. They also considered the oil consumption (about 2 quarts per 70 miles) excessive. Knight also received some bad publicity at the same time when a prototype car was entered in the 1906 Glidden tour only to drop out on the first day due to mechanical failure.

Knight decided to try to interest English manufacturers in his engine and in 1907 went with one of his cars to London where he managed to see Percy Martin] the director of Daimler. Daimler's engineers tested the engine and the results were sufficiently encouraging that Knight obtained a British patent for his engine on June 6 1908. In September Daimler announced that "Silent Knight" engines would be installed in some of its 1909 models.

To combat criticism from its competitors, Daimler had the RAC (Royal Automobile Club) carry out their own independent tests on the Daimler-Knight. RAC engineers took two Knight engines and ran them under full load for 132 hours nonstop. The same engines were then installed in a touring car and driven for a distance of 2,000 miles (3,200 km) on the Brooklands race track, after which they were removed and again ran on the bench for 5 hours. RAC engineers reported that when the engines were dismantled, there was no perceptible wear, the cylinders and pistons were clean, and the valves showed no signs of wear either. The RAC was so impressed that it awarded Daimler the 1909 Dewar Trophy.

The RAC tests caused Daimler's share price to rise and the company's competitors to fear that the poppet-valve engine would soon be obsolete. Walter Owen Bentley was of the opinion that the Daimler-Knight engine performed as well as the comparable Rolls-Royce power plant.

The Knight engine (improved significantly by Daimler's engineers) attracted the attention of the European automobile manufacturers Panhard et Levassor, Mercedes, and Minerva, all of whom purchased Knight licences.

Thomas Russell of the Canada Cycle & Motor Co. Ltd. had followed the Knight with interest and when he read about the RAC tests he voyaged to England in 1909 to secure a licence from Knight. In addition, Russell came to an agreement with Daimler by which the company would supply Daimler-Knight engines for two years. Russell went on to manufacture several models of Russell-Knight luxury cars.

In August 1911 the engine was licenced by the US automobile makers Columbia, Stearns, and Stoddard-Dayton. A licence was also purchased by the Atlas Engineering Company of Indianapolis to make engines, which appeared in 1914 as the Lyons-Knight.

Columbia, Stoddard-Dayton, and Atlas went bankrupt shortly after and their licences were transferred to other companies. Edwards-Knight obtained one which they passed on to Willys, while Moline acquired another which they retained into the 1920s.

Willys made improvements to the Knight engine which were patented and in 1916 announced their Willys-Knight 88-4. They went on to open a Canadian manufacturing plant at Toronto to build export models.

By 1925 there were five operations in the US producing chassis with Knight engines, and Willys-Knight production was running at 250 cars per day, Willys announcing in the same year that there were over 180,000 Willys-Knight engines in use worldwide. Willys also took over Stearns that year, forming a separate syndicate for the purpose (the companies were not merged).

Sales of Willys-Knight cars declined towards the end of the 1920s. Thanks to the work of Harry Ricardo and Charles F. Kettering simpler slide valve engines had become very efficient, their first appearance being in the 1924 Chrysler, and the Knight's engine high manufacturing cost began to tell against it. While Willys built Knight models into the 1930s, development work had ceased. The Knight patents expired in 1932 and although a 1933 Willys-Knight Streamline Six was announced in June of that year, it is doubtful if production was continued into 1933. These were the last sleeve valve automobiles manufactured in the US.

The Knight engine had an earlier start in Europe, where it also lasted longer. Mercedes built their 4-litre Knight 16/50 until 1924, while the Simson Supra Knight of 1925-26 was probably the last German Knight-engined car. Voisin built an air-cooled radial engine using the Knight principle in 1935 which was their last use of Knight technology. 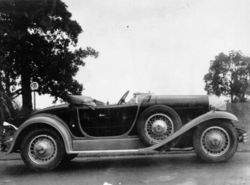