Vehicles built by the Chrysler Corporation are cars bearing the name "Chrysler" rather than one of their subsidiary companies (Dodge, Jeep, and Plymouth for examples). Most Chryslers have been luxury cars, with the exception of their 1970s European models which were developed by the Simca and Rootes divisions.

The list below also includes vehicles manufactured in other countries and cars designed by other independent corporations that were rebranded for Chrysler. "Chrysler Australia" was the Australian division of Chrysler, and cars made by Chrysler Australia were sold mainly in their country of origin. The same goes for cars marked "Europe" and "Canada". Many of the images of rebranded vehicles are actually pictures of the cars in their original, non-Chrysler form. For many rebranded cars, the original version is similar enough (almost identical) to the Chrysler version, so the original cars are used instead. Some of the links in the following table may redirect you to a differently named vehicle (for example, the link Chrysler Laser leads to Dodge Daytona), but only because that particular vehicle was rebranded into a Chrysler with insignificant and minor changes to the original design. The Chrysler versions of that vehicle are to earn an article.

Cars bolded have an image in the right margin.

The Chrysler Firepower at the 2006 North American International Autoshow. 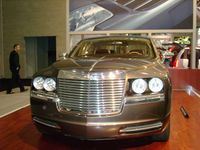 A Chrysler Imperial at the 2007 Washington Auto Show.

The Chrysler Nassau at the 2007 Washington Auto Show. 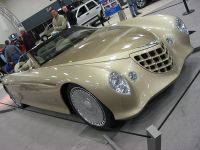 A Chrysler Phaeton at the San Francisco International Auto Show in 2005.

Technical specifications for most Chrysler vehicles