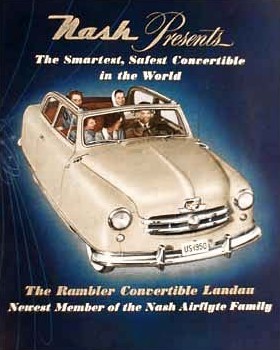 The Nash Rambler was a North American automobile produced by the Nash Motors division of Nash-Kelvinator Corporation from 1950 through 1956.

Nash-Kelvinator's President George W. Mason saw that the company needed to compete more effectively and insisted a new car had to be different from the existing models in the market. The Rambler was designed to be smaller than contemporary cars, yet still accommodate five passengers comfortably. The Nash Rambler established a new segment in the automobile market and is widely acknowledged to be the first modern American compact car.

In developing this new car, Nash had originally planned to call it the Nash Diplomat. This name would have rounded out the Nash family of cars, as for 1950 the 600 line was re-named the Statesman, and the Ambassador remained the flagship line. When it was learned that Dodge had already reserved the Diplomat name for a planned two-door hardtop body style, Nash delved into its own past, and resurrected the Rambler name from 1902. The Rambler was one of the most popular of early American autos. Similarly, the new Nash Rambler was highly respected throughout its 1950-1955 lifespan. 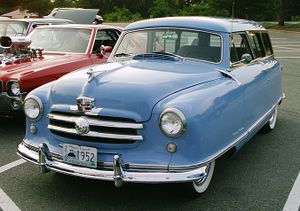 The Nash Rambler was introduced during the 1950 model year. The new model was the company's entry in the lower price segment dominated by models from Chevrolet, Ford, and Plymouth. The Rambler was designed to be lighter in weight and have smaller dimensions than the other popular cars. A strategy of efficiency, Nash could save on materials in its production while owners would have better fuel economy. The car rode on a 100-inch (2,500 mm) wheelbase, and power came from Nash's proven 173 cu in (2.8 L) L-head (flathead) Straight-6 cylinder engine that produced 82 hp (61 kW).

Additional historical context of the Nash Rambler, along with the Nash Healey and Metropolitan was that US citizens were exposed to and had become fond of smaller more efficient compact and sporty European cars during the WW2 theater of operations. Along with the less gaudy styling cues of European design, that input of enyoying more compact cars was also an effect of Kelvinator having a wide market overseas. This influence is seen directly in the Pinin Farina models. AMC would continue to import European design and styling flair for it's products without much notice by typical sources of media, such as the Gucci, Pierre Cardin and Oleg Cassini models, as well as noticeable bodyshell features such as the '74 Matador Coupe's grille arrangement.

The new Rambler was also introduced only as an up-market two-door convertible - designated the "Landau". The decision to bring the car out in a higher market segment with more standard features was a calculated strategy by Mason. Foremost in this strategy was the need to give the new Rambler a positive public image. Mason knew the car would fail if seen by the public as a "cheap little car". He knew what Crosley was just finding out with its line of mini cars, and the Henry J would teach Kaiser Motors; namely, that Americans would rather buy a nice used car than a new car that is perceived as inferior or sub-standard.

Other factors incorporated into the Rambler's marketing mix were the limited steel supplies during the Korean War, as well as the strategy for profit maximization from the new Rambler. The desire to earn a high return for the company meant that the new Rambler, with its expected low initial production volume, was priced higher than the base models from its intended competition. To further increase the value to buyers, the car was well equipped compared to the competition and included items such as whitewall tires, full wheel covers, electric clock, and even a pushbutton AM radio.

Following the design of the larger "senior" Nash models, the compact Rambler's styling was rounded in form and also had an envelope body with fender skirts that also enclosed the front wheels. This design feature did not impair the car's cornering ability too significantly. Unlike almost all traditional convertibles of the era that used frame-free side windows, the Rambler retained the fixed roof structure above the car's doors and rear side window frames. This metal structure served as the side guides or rails for the retractable waterproof canvas top. This design allowed Nash to utilize its monocoque (unibody) construction on its new compact. It made the Rambler body very rigid for an open top car, without the additional bracing required in other convertible models.

In 1951, the Rambler line was enlarged to include a two-door station wagon and a two-door pillar-less hardtop - designated the Country Club.

The Rambler received its first restyling in 1953, and came to strongly resemble the "senior" Nash models which had received all-new "Airflyte" styling the prior year. A two-door sedan was added in 1953. For 1954 a four-door sedan and a four-door station wagon - designated the "Cross Country" - were added. These four-door body styles used a 108-inch (2,700 mm) wheelbase. For 1955 the traditional enclosed front wheel wells were opened.

On January 14 1954, Nash and Hudson Motor Car Company merged, and the successor corporation was named American Motors Corporation (AMC). Following the merger, Hudson dealers began receiving Ramblers that were badged as Hudson brand cars. The Hudson Ramblers and Nash Ramblers were identical, save for the brand name and minor brand badging.

For 1956, American Motors created an all-new Rambler, using a 108-inch (2,700 mm) wheelbase and increasing the overall length of the cars. Again, the Rambler was sold under the Nash and Hudson brand names. The new Ramblers came only as four-door models. Along with the usual four-door sedan and station wagon was a new four-door hardtop sedan. Also, Rambler introduced an industry first, a four-door hardtop station wagon. For 1957, the Rambler became a make in its own right, no longer branded as a Nash or Hudson. Also, for 1957, a V8 engine became available in Ramblers for the first time. This was AMC's own 250 cu in (4.1 L) V8 engine introduced the year before in the Nash Ambassador Special and Hudson Hornet Special. In addition, available only in 1957 was a special high-performance four-door hardtop sedan model called the Rambler Rebel. The Rebel came equipped with AMC's new 327 cu in (5.4 L) V8. The engine was also used in the larger Nash Ambassador and Hudson Hornet for that year. Plans had called for a fuel injection option for the Rebel, but hard starting in cold weather forced it to be scuttled at the last minute. The limited-production Rebel (1,500 produced) is considered to be a precursor of the muscle cars that became so popular in the 1960s.

In 1958 the Rambler became the sole brand of automobile produced by American Motors Corporation, with the discontinuance of the Nash and Hudson brands. For information on Rambler brand cars, see: Rambler (automobile).

In 1958 the music group The Playmates wrote a novelty song entitled "Beep Beep", in which the driver of a Nash Rambler inadvertently humiliates the "narrator" of the song, the driver of a Cadillac. The song was a hit, and in recent decades has been a popular selection on the Dr. Demento radio show.

In the 1950s TV show The Adventures of Superman showed actor George Reeves who played Superman/Clark Kent driving a Nash Rambler while in his guise of Clark Kent.

The Nash Rambler figures centrally in Kaizo Hayashi's Hama trilogy: The Most Terrible Time of My Life, Stairway to the Distant Past, and The Trap. These films feature Masatoshi Nagase as Maiku Hama, P.I. The hard-boiled (yet exceedingly hip) detective drives a two-tone, convertible Nash Rambler throughout the city streets of Yokohama as he pursues his neo-noir investigations. The Nash is almost a character itself in these films; for example, he takes a case in Stairway to the Distant Past to get his "little car" back from loan sharks.

The song Brian's Back by Mike Love begins with the line "teenage gamblers sittin' in a Rambler, listening to the radio".

Also, in Saturday Night Live sketches of the The Church Lady, (Dana Carvey) is said to drive a Rambler, or so says Satan (Jon Lovitz), though he does not mention what kind.

In 2006, Al McCoy who is an announcer for the NBA team the Phoenix Suns, started calling the Suns two-time MVP Steve Nash "the Nash Rambler". Like the vehicle, Steve Nash may be smaller and lighter than most, yet still has the power to go coast to coast.

In Doogie Howser, M.D., season 4 episode 1 ("There's A Riot Going On"), Doogie's friend Vinnie wants to buy a Nash Rambler because its seats fold down into a bed.