The Plymouth Barracuda is a 2-door car that was manufactured by the Plymouth division of the Chrysler Corporation from 1964 through 1974.

The first-generation Barracuda, a fastback A-body coupé based on the Plymouth Valiant, had a distinctive wraparound back glass and was available from 1964 to 1966.

The second-generation 1967 – 1969 Barracuda, though still Valiant-based, was heavily redesigned. Second-generation A-body cars were available in fastback, notchback, and convertible versions.

The 1970 – 1974 E-body Barracuda, no longer Valiant-based, was available as a coupé and a convertible, both of which were very different from the previous models.

Automotive trends in the early-mid 1960s had all the US manufacturers looking at making sporty compact cars. Chrysler's A-body Plymouth Valiant was chosen for the company's efforts in this direction.[1]

Ford's Mustang, which significantly outsold the Barracuda, gave to this type of vehicle its colloquial name "pony car", but the Barracuda fastback's release on 1 April 1964 beat the Mustang by two weeks [2].

Plymouth's executives had wanted to name the car Panda, an idea that was unpopular with the car's designers. In the end, John Samsen's suggestion of Barracuda was selected.[3]

The Barracuda used the Valiant's 106 in wheelbase and the Valiant hood, headlamp bezels, windshield, vent windows, quarter panels and bumpers; all other sheet metal and glass was new. This hybrid design approach significantly reduced the development and tooling cost and time for the new model. 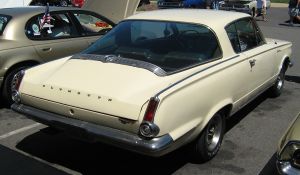 The fastback body shape was achieved primarily with a giant backlight, which wrapped down to the fender line. Pittsburgh Plate Glass (PPG) collaborated with Chrysler designers to produce this 14.4 ft² (4.4 m²) rear window, the largest ever installed on a standard production car up to that time[4].

The Barracuda was able to return the Valiant's favor the next year, when the fenders and tail lamps that had been introduced on the 1964 Barracuda were used on the whole 1965 Valiant range except for the wagon.

1964 was not only the first year for the Barracuda, but also the last year for push-button control of the optional Torqueflite automatic transmission, so 1964 models were the only Barracudas so equipped. 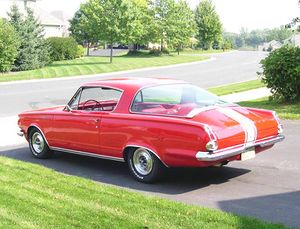 New options were introduced for the Barracuda as the competition between pony cars intensified. The 273 engine was made available as an upgraded Commando version with a 4-barrel carburetor, 10.5:1 compression, a more aggressive camshaft with solid tappets. These and other upgrades increased the engine's output to 235 bhp (175.2 kW).

Also in 1965 the Formula 'S' package was introduced. It included the Commando V8 engine, suspension upgrades, larger wheels and tires, special emblems and a tachometer. Disc brakes and factory-installed air conditioning became available after the start of the 1965 model year.

For 1966, the Barracuda received new taillights, new front sheet metal, and a new dashboard. The latter had room for oil pressure and tachometer gauges on models so equipped. The 1966 front sheet metal, which except for the grille was shared with the Valiant, gave a more rectilinear contour to the fenders. Deluxe models featured fender-top turn signal indicators with a stylized fin motif. The bumpers were larger, and the grille featured a strong grid theme. A center console was optional for the first time.

Although the first Barracudas were heavily based on the contemporary Valiants, Plymouth wanted them perceived as distinct models. Consequently, the "Valiant" chrome script that appeared on the 1964 model's trunk lid was phased out on the 1965 model in the US market. For 1966, a Barracuda-specific stylized fish logo was introduced[3], though in markets such as Canada and South Africa, where Valiant was a marque in its own right, the car remained badged as Valiant Barracuda until the A-body Barracuda was discontinued.

In profile, the 1967 Hillman Hunter-based Sunbeam Rapier Fastback coupé from Chrysler's United Kingdom company (the former Rootes Group), resembles the 1964–66 Barracuda. However the Rapier's designer, Roy Axe, said that there was no direct connection.[citation needed]

The second-generation Barracuda, now a 108 inches (2,743 mm) wheelbase A-body still sharing many components with the Valiant, was fully redesigned with Barracuda-specific sheet metal styling and its own range of models including convertibles as well as fastback and notchback hardtops. 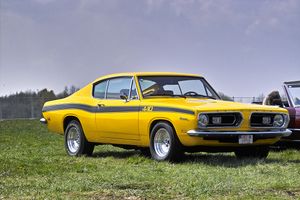 The new Barracuda was styled chiefly by John E. Herlitz and John Samsen.[3] It was less rectilinear than the Valiant, with coke-bottle side contours and heavily revised front and rear end styling.

The rear portion of the roof on the fastback coupe was more streamlined, and the back glass, raked at a substantially horizontal angle, was much smaller compared with that of the previous model. Also, the use of chrome trim on the external sheet metal was more restrained.

During this time frame the first U.S. Federal auto safety standards were phased in, and Chrysler's response to the introduction of each phase distinguishes each model year of the second-generation Barracuda: 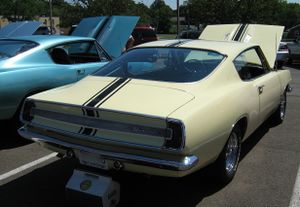 Also in 1968, Chrysler made approximately 50 fastback Barracudas equipped with the 426 cu in (7 L) Hemi for Super Stock drag racing[2].These cars were assembled by Hurst Performance and featured lightweight items such as lightweight Chemcor side glass, fiberglass front fenders, and hood with scoop, lightweight seats, and sound deadener and other street equipment such as rear seats omitted. An included sticker indicated that the car was not for use on public roads; it could run the quarter in the mid 10s in 1968.[2] 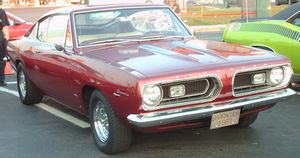 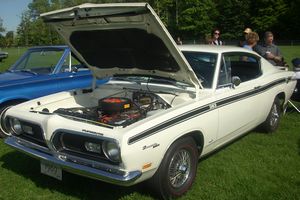 A handful of Savage GTs were also built from the second-generation Barracuda.

In 1969 Plymouth placed increased emphasis on providing and marketing performance. A new option was the Mod Top, a vinyl roof covering with a floral motif, available 1969 and 1970. Plymouth sold it as a package with seat and door panel inserts done in the same pattern. [8]

The redesign for the 1970 Barracuda removed all its previous commonality with the Valiant. The original fastback design was deleted from the line and the Barracuda now consisted of coupe and convertible models. The all-new model, styled by John E. Herlitz, was built on a shorter, wider version of Chrysler's existing B platform, called the E-body. Sharing this platform was also the newly launched Dodge Challenger; however, no sheet metal interchanged between the two cars, and the Challenger had a 2-inch (51 mm) longer wheelbase.

The E-body Barracuda was now "able to shake the stigma of 'economy car'."[9] Three versions were offered: the base Barracuda (BH), the luxury oriented Gran Coupe (BP), and the sport model 'Cuda (BS). The high-performance models were marketed as 'Cuda deriving from the 1969 option. The E-body's engine bay was larger than that of the previous A-body, facilitating the release of Chrysler's 426 cu in (7 L) Hemi for the regular retail market.

Swede Savage and Dan Gurney raced identical factory-sponsored AAR (All American Racers) 'Cudas in the 1970 Trans-Am Series. The cars qualified for three pole positions but did not win any Trans-Am races; the highest finish was 2nd at Road America.[citations needed]

A street version of the AAR 'Cuda was produced, powered by the 340 cu in (5.6 L) "six pack" (three two-barrel carburetors) engine.

The Barracuda was changed slightly for 1971, with a new grille and taillights, seat, and trim differences. This would be the only year that the Barracuda would have four headlights, and also the only year of the fender "gills" on the 'Cuda model.

The 1971 Barracuda engine options would remain the same as that of the 1970 model, except the 4-barrel carbureted 440 engine was not available; all 440-powered Barracudas had a six-barrel carburetor setup instead. The 426 Hemi remained available, and the Hemi-powered 1971 Barracuda convertible is now considered one of the most valuable collectible muscle cars. Only eleven were built, seven of which were sold domestically, and examples of these cars have sold for US$2 million.[11].

After another grille and taillight redesign in 1972, the Barracuda would remain unchanged through 1974, with dual headlights and four circular taillights. Big Block engines (383, 440, & 426 Hemi) were no longer offered; and the 318 was added to the 'Cuda (BS) as the base engine. This continued through 1974 with the 340 being dropped in lieu of the HP 360.

As with other American vehicles of the time, there was a progressive decrease in the Barracuda's performance. To meet increasingly stringent safety and exhaust emission regulations, big-block engine options were discontinued. The remaining engines were detuned year by year to reduce exhaust emissions, which also reduced their power output. There was also an increase in weight as bumpers became larger, and for 1973 doors were equipped with heavy steel side-impact protection beams. By 1974, only the 318 and 360 engines were available. Higher fuel prices and performance-car insurance surcharges deterred many buyers as the interest in high performance cars waned. Sales had dropped dramatically after 1970, and Barracuda production ended April 1, 1974, ten years to the day after it had begun.

A 1975 Barracuda was planned before the end of the 1970-74 model cycle. Plymouth engineers sculpted two separate concepts out of clay, both featuring a Superbird-inspired aerodynamic body, and eventually reached a consensus upon which an operational concept car could be built. Due to a rapidly changing automotive market, the concepts were scrapped and the 1975 Barracuda was not put into production. [12]

The Barracuda is today a muscle car sought by collectors, though the rarity of specific models and option combinations today is largely the result of low buyer interest and production when the vehicles were new.

In 2007, Motor Trend magazine reported a rumor that the Chrysler Group was considering reviving the Barracuda in 2009[13] alongside the revived Dodge Challenger to compete with the Ford Mustang and new Chevrolet Camaro. Because the Plymouth brand was withdrawn from the market in 2001, the new Barracuda would be branded as a Chrysler. However, a Chrysler official called the Barracuda's reintroduction unlikely.[citation needed]