The Plymouth Caravelle is a mid-sized sedan that was originally a 1983 Canadian model. The Caravelle came to the United States in 1985 to replace the Chrysler E-Class. It was essentially identical to the concurrent Dodge 600. It was replaced by the Plymouth Acclaim in 1989.

For 1985, Chrysler dropped its unsuccessful entry-level variant of the E platform, the Chrysler E-Class (the idea of a more mainstream Chrysler was not well received by consumers). Even though the Dodge 600 was mainstream, Dodges were not generally sold with Chryslers, so rather than only having the upscale New Yorker on Chrysler-Plymouth dealer lots, the former E-class was given a new grille, and thus the U.S. Caravelle was born. This model was slotted between the compact Reliant K and the large rear-wheel drive Gran Fury. 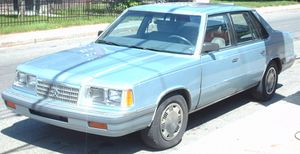 For 1986, the Caravelle was given a facelift, which rounded many of the sharp angles, giving it a more aerodynamic appearance. Also from 1986 onward, a base model was offered, without some of the standard features of the "SE". The Caravelle continued in the U.S. until 1988, when it was replaced by the new A body Acclaim for 1989. Unlike the identical Canadian Caravelle, a 2-door coupe model was never offered in the U.S.

The coupe was dropped after 1986 while sedan production came to an end in 1988. Like the U.S. version, the Canadian Caravelle was replaced by the Plymouth Acclaim for 1989. The Caravelle Salon, which was the original rear wheel drive version, survived until 1989.