The first Plymouth Duster was a semi-fastback version of the Plymouth Valiant automobile, produced in the US from 1970 to 1976.

The Duster competed with Ford's slightly smaller semi-fastback Maverick compact, which was also introduced in 1970, and Chevrolet's slightly larger semi-fastback Nova, sporting a body that was introduced in 1968. While the Maverick and Nova were offered in a 4-door configuration, Chrysler chose to use the Duster nameplate only for the sporty 2 door coupe, retaining the Valiant name for the more mundane 4 door sedan and 2 door hardtop. The Duster resulted from the Plymouth planning staff's desire to use their allotted 1970 restyling money for something more desirable than the usual two and four-door Valiants. The Valiant platform was used, with front end sheetmetal the same, but completely different from the cowl back. The Duster was also created to fill the slot that was formerly occupied by the Valiant-based Barracuda. When the Barracuda moved from its A-body platform to the new E-body platform in 1970, this left a hole in Plymouth's lineup for a sporty compact. The Duster would fill this gap and would be one of many factors in the sales failure of the E-body pony car Barracuda[citation needed].

Numerous variants of the Duster were offered, with focus ranging from economy to cargo capacity to performance, with such model names as Feather Duster, Gold Duster, Space Duster, Duster Twister, and 340 Duster.

In 1970, Plymouth unveiled the new Duster model, which was based on the 1969 Plymouth Duster I concept car[citation needed]. The Duster was all Valiant from the cowl forward, but the rest of the car was completely different. It used a semi-fastback roof and a special rear valance with twin horizontal taillights. For 1970 only, a small Valiant badge went on the front fenders just above the Duster badge.

The Duster was a success for Plymouth, so much so that in 1971 Dodge requested and received their own version, the Demon. In response, Plymouth was given a version of the Dodge Dart Swinger 2-door hardtop named the Plymouth Scamp.

For 1971, only small changes were made to the Duster. The "Valiant" fender badges and "Plymouth" grille logotype were deleted. A new trim package was released, called the Duster Twister. The Twister package presented the aggressive appearance of the Duster 340, but came only with insurance-friendly Slant Six I6 or 318 power. The Twister's appearance package included special side stripes that mimicked the Duster 340 Wedge stripes, a matte-black hood and the 340's special shark-tooth grille. A nonfunctional dual hood scoop and rear spoiler appearance package was available, as were high-back bucket seats and dual exhaust.

"Need exact production numbers for the twister model for each year Twisters were made".

The Duster was not changed significantly for 1972. New surface-mount sidemarker lights replaced the previous flush-mount items, the taillamps became larger, one-piece units. The 340 V8's power rating was reduced from 275 bhp (205 kW) to 245 hp (183 kW) due in part to a reduction in compression ratio from 10.2:1 to 8.5:1 as well as changing the intake valves from 2.02 in (51 mm) to 1.88 in (48 mm),[citation needed] though all horsepower rating numbers, even on unchanged engines, decreased for 1972 due to a new rating protocol.

Like the Valiant, the Duster was given a new hood, grille, and taillamps for 1973. The taillights on previous years mounted from the inside and had a flush appearance. Starting in 1973, the taillights were mounted from the outside and were trimmed in chrome. These remained unchanged through 1976. In the midst of the first oil crisis, 1974 would be the Duster's best sales year, with over 277,000 units produced[citation needed].

For 1974, Plymouth replaced the 340 with a 360 in³ (5.9 L) version of the corporate LA-series V8, with lower performance due to government-imposed emissions regulations.

The 1976 Feather Duster was an engineering success, featuring many lightweight parts including the intake manifold, bumper brackets, hood and trunk bracing, and manual transmission housing. It had a 225 Slant Six calibrated for economy, a low-restriction exhaust system, an extra-high rear axle ratio and was offered with either the Torqueflite 3-speed automatic or A833OD overdrive 4-speed manual transmission. It was, by far, the most fuel-efficient car in its size class (along with a similar Dodge model, the Dart Lite)[citation needed]. There was also a version called the Space Duster that had fold-down rear seats, and along with the huge trunk had over 50 cu. ft. of cargo space. That same year, the Duster 360 was one of a select few cars remaining on the market that had a relatively large engine-size to-vehicle-weight ratio. The 1976 model would be the last for the original Valiant based Duster, yet had two little-known changes: parking brake activated by a floor pedal, and windshield-mounted rear-view mirror.

Revivals of the Duster name 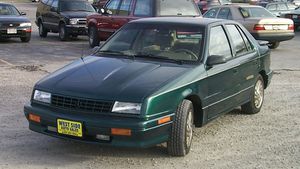 The Duster name was first revived for a trim package available on the 1979-80 Plymouth Volare coupe, then on the front wheel drive 1985-87 Plymouth Turismo, and finally, from 1992 to 1994 V6-powered Plymouth Sundance coupes and hatchbacks.

Additional information is available in the Valiant article on which the Duster was based.