The Plymouth GTX was introduced as the Belvedere GTX in 1967 by the Plymouth division to be a "gentleman's" muscle car. It was to be an exceptional blend of style and performance. What differed it from a normal Belvedere was its special grille and rear fascia, as well as mock hood scoops, chrome "pit stop" fuel filler cap and optional racing stripes. For the performance aspect of the vehicle, a superb suspension system was made standard. Standard too was Plymouth's massive 440 cu in (7.2 L) V8 nicknamed the "Super Commando 440". The engine was rated at 375 hp (280 kW). Buyers in 1967 could pay an extra US$546 and replace the 440 with Chrysler's legendary 426 cu in (7 L) Hemi. The 426 was dubbed the "Elephant."

In 1968, after one year of production, the GTX was given a completely new look. A new hour glass body replaced the more box like body of 1967. The Road Runner was introduced by Plymouth as a budget version of the Belvedere. There were major changes made in the design of the Belevdere, which made it to both the Road Runner and the GTX. The Road Runner's base engine was the new 383 cu in (6.3 L) "Super Commando" V8 (renamed the "Road Runner 383"), while the 440 was still standard in the GTX. The TorqueFlite automatic transmission was the standard on the GTX, with it being a US$206 option in the Road Runner. The GTX was offered in two models, the 2-door convertible and the 2-door hardtop. The Roadrunner was a base model of the Belvedere, and the roadrunner had less insulation and comfort items(padding, vinyl roof, trim), which made the car weigh less which helped produce better track times, and help it stay in the low price field.

In 1969, the GTX's sales were hurt when the Road Runner was also offered in a convertible body style. The GTX received minor cosmetic changes, as well as the introduction of the optional Air Grabber hood (standard on Hemi-engined models), which made the hood scoops functional. The standard 440 V8 was still rated at 375 hp (280 kW). 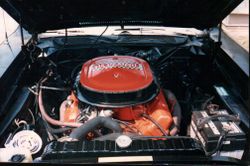 The 1970 GTX received a major redesign but sales still suffered. Stylists made the lines smoother, and a "power bulge" hood was introduced, as well as non-functional rear brake air scoops. The convertible model was dropped in 1970. The Air Grabber hood scoop was brought back, but instead of being two scoops on the hood as in 1969, it became one scoop located on the power bulge. The GTX was available with the standard 440 4 barrel, as well as the 440+6 barrel (three two barrel carburetors) and the 426 Hemi. The 440+6 could compete closely with the Hemi, up until highway speeds. The GTX included much more standard equipment. The GTX had only one other competitor in Plymouth luxury muscle, and that was the Sport Fury GT, built on the C-Body platform. The Sport Fury GT was added to the lineup in 1970. The GT has received nowhere near as much recognition as the GTX, even though they shared many performance options. The Sport Fury GT was the full-size member of The Rapid Transit System. C bodies were often viewed as more of an elderly gentleman's classic luxury car.

Though completely redesigned for 1971, this was the final year for the GTX as a standalone model. Engine choices were 440 four-barrel, 440 with three two-barrels, and 426 Hemi. Emission restrictions such as lower compression ratios and faster-acting choke operation lowered the base 440 output by 5 hp (3.7 kW), to 370 hp (280 kW). The 440 Six Barrel was down to 385 hp (287 kW), but the Hemi was still rated at 425 hp (317 kW). Due partly to rising insurance rates on muscle cars, sales were low. There were less than 3000 units produced in '71. The following year, the GTX became an option package on the Road Runner.