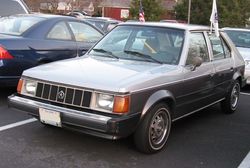 The Dodge Omni and the similar Plymouth Horizon were front wheel drive cars introduced by the Dodge and Plymouth divisions of Chrysler Corporation in North America in 1978, and were based on a European Simca-based design of the same name. While they are generally not credited, they were the first of many successful front-wheel drive models, such as the Dodge Aries/Plymouth Reliant and the Dodge Caravan/Plymouth Voyager which helped return Chrysler to profitability.

The Dodge Omni and the similar Plymouth Horizon were front-wheel drive cars introduced by the Dodge and Plymouth divisions of Chrysler Corporation in North America in 1978. It was a three or five-door hatchback. Although the car had substantial European origins (the car was actually developed by Simca, the French division of Chrysler Europe, before that company was sold to Peugeot, which released the car as the Talbot Horizon), it was presented as a very significant domestic development, since it was assembled by Chrysler, who retained North American rights to the car. Both the Omni and the Horizon were based on Chrysler's then-new L platform. The company had avoided building a car for the subcompact market up until that time, preferring to use captive imports like the Dodge Colt instead. The Omni and Horizon were the first front wheel drive cars in the Dodge and Plymouth lineups.

The Horizon and its corporate twin the Omni (sometimes collectively referred to as the Omnirizon) appeared at a critical time, when Chrysler was desperately looking for government support to survive. In 1978, Chrysler had beaten both Ford and GM to the market with a domestically-produced front-wheel drive car to challenge the VW Rabbit. News reports indicated that these fresh small cars, which did indeed begin to sell well, helped persuade Congress and the White House that Chrysler had a future worth saving. The Omni was Motor Trend magazine's Car of the Year for 1978.

Despite looking almost identical, the Omni and Horizon had few interchangeable parts with their European siblings. Aside from the heavier-looking American body panels and bumpers, the OHV Simca engines were replaced with a 1.7 L OHC engine sourced from Volkswagen, while MacPherson strut front suspension took the place of the torsion bar arrangement found in the European Horizon. The small Volkswagen engine used an enlarged Chrysler-designed cylinder head and intake manifold and produced 75 hp (56 kW) and 90 lb·ft (122 N·m).

Early on, the cars had a shaky period after Consumer Reports magazine tested one and reported that it easily went out of control in hard maneuvering. Since front wheel drive cars were still establishing themselves in the American market, this was a serious charge and was reported extensively by the mainstream media, including a witty heading in Time Magazine: Storm over the Horizon. However, auto magazines reported no problems and indicated that the Consumer Reports test deliberately steered the car off course to see what would happen and did not approximate real-world driving conditions. The car weathered the tempest and went on to success.

One interesting aspect of the car was the mounting of the HVAC controls to the left of the steering wheel rather than in the center stack like in most vehicles. This meant that only the driver could adjust the interior temperature. It was a quirk not only found in the Omni and Horizon, though; many other Chrysler Corporation products (including the Dodge Charger and Chrysler Cordoba) and vehicles from other manufacturers (including Ford) came with instrument panels that placed the HVAC controls in this general location during the 1970s.

Chrysler's 2.2 L K-car engine appeared in 1981 as an upmarket option to the small Volkswagen engine. It produced 84 hp (63 kW) at first, rising to 93 hp (69 kW) and finally 96 hp (72 kW) by the end of production. The Volkswagen 1.7 was replaced by a Simca/Peugeot-produced 1.6 L I4 unit in 1983. This engine produced 62 hp (46 kW) and 86 lb·ft (117 N·m), and was only available with a manual transmission. The 2.2 L Chrysler was the only engine from 1987 onwards. The Omni and the Horizon finally ended production in 1990, and were replaced by the Dodge Shadow/Plymouth Sundance (both introduced in 1987). Interestingly, Chrysler invested in a number of significant changes that ended up being used for only one year; the cars gained larger exterior rear-view mirrors (borrowed from the departed M-body sedans), a driver's side air bag and a mildly redesigned instrument panel ... complete with HVAC controls finally moved to the center. As production was being wound up all tooling needed to produce the vehicle was sold to The TATA Group in India, and the car was produced there for sevral more years.

Canadian comedians Arrogant Worms have a song dedicated to the 1984 Plymouth Horizon.

The protagonist of Neal Stephenson's novel Zodiac drives an Omni GLH Turbo. He describes it in an early passage: "Sure, spend three times as much and you could get a car that goes a little faster, but who is seriously going to thrash a vehicle that costs that much? Who'll risk denting it? But if it's an Omni, who cares?"[1]

The comedian Lewis Black mentions the Horizon in a skit on his 2000 album, The White Album. He explains that it is not possible to take a Horizon for a joyride, as "...it is not a joy to ride."

In the 1990 film Home Alone, the pizza delivery guy drives a Plymouth Horizon, and while driving on the icy roads, struggles to keep it under control. In a recurring gag in the film, it collides with a metal statue in the driveway and knocks it over.

Several variants of the platform appeared later, including a 3-door hatchback known as the Dodge 024/Plymouth TC3 and briefly a small car-like truck under the Dodge Rampage/Plymouth Scamp name.

The 024 and TC3 were marketed as sporty cars, although a modest 94 hp (70 kW) four-cylinder engine, decent aerodynamics and light weight didn't make them very formidable. The TC3 was renamed the Plymouth Turismo, and the 024 the Dodge Charger in 1983. The last 1,000 Dodge Chargers were modified by Carroll Shelby into Shelby GLHSs.

The ultimate Dodge Omni was the Carroll Shelby-modified Omni GLH. The original name, "Coyote", was rejected, and Shelby's choice, the initials GLH, which stood for "Goes Like Hell", were taken instead.[2] 1984 was the first year of the GLH, which carried over most of the modifications that had been made the previous year to the Shelby Charger. 1985 was the debut of the real GLH model with the turbocharged engine option. This engine, at low boost (10 psi) coupled with the car's very low weight (as low as 2,200 lb (1,000 kg)), earned this car its name. The car carried over into 1986 unchanged aside from the addition of a hatch-mounted third tail light, and production was stopped. The final 500 GLH cars were sold to Shelby, who used them as the basis for the 1986 Shelby GLHS ("Goes Like Hell Sm'more"). These cars were modified by Carrol and sold as Shelbys.