The Plymouth Road Runner was the no-frills muscle car version of intermediate Belvedere and Satellite built by the Plymouth division of the Chrysler Corporation in the United States between 1968 and 1980. In 1968, the first muscle cars were, in the opinion of many, moving away from their roots as relatively cheap, fast cars as they gained options. Although Plymouth already had a performance car in the GTX, designers decided to go back to the drawing board and reincarnate the original muscle car concept. Plymouth wanted a car able to run 14-second times in the quarter mile (402 m) and sell for less than US$3000. Both goals were met, and the low-cost muscle car hit the street. The success of the Road Runner would far outpace the upscale and lower volume GTX, with which it was often confused.

Paying $50,000 to Warner Brothers to use the name and likeness of their Road Runner cartoon character (as well as a "beep, beep" horn, which Plymouth paid $10,000 to develop), and using the Chrysler B platform as a base (the same as the Belvedere, Satellite, and GTX), Plymouth set out to build a back-to-basics muscle car. Everything essential to performance and handling was beefed-up and improved; everything nonessential was left out. The interior was spartan, lacking even carpets in early models, and few options were available. A floor-mounted shifter featured only a rubber boot and no console so that a bench seat could be used. The earliest of the 1968 models were available only as 2-door coupes (with a centerpost between the front and rear windows), but later in the model year a 2-door "hardtop" model (sans centerpost) was offered. The Road Runner of 1968-1970 was based on the Belvedere, while the GTX was based on the Satellite, a car with higher level trim and slight differences in the grilles and taillights. 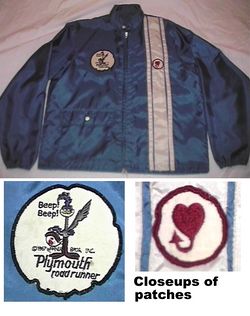 Plymouth dealers gave away this promotional windbreaker in 1970. The "heart with an arrowhead at bottom" design was part of Plymouth's ad campaign that year. The Road Runner is holding a helmet with the same symbol on it.

The 1969 model kept the same basic look and was slightly changed cosmetically (i.e. rear tail lights, optional bucket seats, new Road Runner decals). The Road Runner added a convertible option for 1969, although fewer than 2000 droptop models were produced for the year, and only nine with the Hemi.

An "Air Grabber" option was introduced this year; it consisted of an air duct assembly bolted under the hood, that connected to twin rectangular scoops in the hood. When the hood was closed, this assembly fitted over a special air cleaner assembly to force air directly into the engine. The scoops in the hood could be opened and closed via a lever under the dashboard. The design and functionality of the "Air Grabber" option was changed after 1969.

While the 383 engine remained the standard powerplant, a 440 CID engine with three two-barrel carburetors, known as the "440 Six Pack" (6-BBL), was added to the lineup at mid-year to qualify the engine for the "Super Stock" drag racing class. The Six Pack Road Runners had no wheel covers or hubcaps and a flat black lift-off fiberglass hood with functional hood scoop. Its 440 engine produced 390 hp (291 kW) and 490 lb·ft (664 N·m) of torque at 3200 rpm, very similar numbers to the Hemi and at a lower engine speed. This meant the cheaper 440 6-BBL was nearly as fast as the 426 Hemi, at least up to highway speeds. This option, along with the economical yet fast 383 and the outrageously fast Hemi helped propel Plymouth, and corporate sibling Dodge, to the top of the dragstrip echelon.

1970 brought new front and rear end looks to the basic 1968 body, and it would prove to be another success. An updated version of the "Air Grabber" hood was introduced this year. A switch below the dash would open the hood and sharklike teeth "Air Grabber" graphics would be exposed. "High Impact" colors, like In-Violet, Moulin Rouge, Vitamin C, were options available for that year. The 1970 Road Runner and GTX continued to be attractive and popular cars. The engine lineup was left unchanged.

The Plymouth Duster I was a high-performance concept car of the Road Runner in the late 1960s. It featured the usual low curved racing type of windshield and had airplane-type flaps on the top and sides. There was a set adjustable spoilers on the side of the rear fender near the gas tank filler cap to prevent side-to-side yaw when slipstreaming in a race, with two more of them on top behind the driver, plus spoilers in the front rock shields to reduce frontal lift. It was powered by a 426 Hemi.[1] 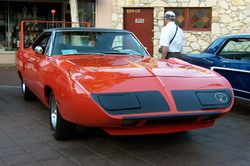 With success of the aero-warrior NASCAR Dodge Charger Daytona against fastback Ford Torinos and Mercury Cyclones, Plymouth would get its own version of this winged wonder. This model added a goalpost spoiler to catch wind well above the body, and a shark shaped nose cap. It would also lure Richard Petty back to Plymouth after defecting to Ford for a year. While spectacular on the track, consumer response was luke-warm, leading some dealers to remove the wing and nose, making them appear more like normal Road Runners. In the 2000s, these would fetch among the highest prices of any muscle car at auctions.

Trying to capture some of the success that their Dodge brothers had in 1969 with the Charger Daytona, Plymouth tried the same thing in 1970 with their creation, the Plymouth Superbird. According to Road Test magazine, performance was around 0 to 60 mph (97 km/h) in 5.5 seconds, 1/4 mile in 14.3 seconds at 104 mph with the Hemi [2]. Although similar in appearance, the Superbird was actually quite different from the Daytona. The Superbird was based on the Plymouth Road Runner and the nose, airfoil, and basic sheet metal was different between the Daytona and Superbird. The special nose added 19-inches (483 mm) to the overall length (the Daytona's was 18-inches or 457 mm), and the trunk spoiler was more angled and higher than the Daytonas. On both models, the spoiler was three feet high. Although it created quite an impression on the street, the wing was not needed at normal highway speeds; it was designed for speedways, to keep the rear wheels to the ground at 150 mph (240 km/h) and higher speeds.

The reason for using such a large spoiler is unclear, since the engineers said they started out with a much smaller version. One story has it that the aerodynamics became more favorable as they made the spoiler taller; another story is that it was raised to allow the trunk to be opened; although one could argue that changing to a trunk mount (from a rear-fender mount) would have solved that problem.[3]

In 1971, the coupe bodywork was completely changed to a more rounded "fuselage" design in keeping with then-current Chrysler styling trends, including a steeply raked windshield, hidden cowl, and deeply inset grille and headlights. In a departure from previous thinking, the B-Body two-door bodies shared little if any sheet metal, glass, or trim with the four-door bodies. The convertible was canceled. 1971 was a high-water year for ride and handling for the Road Runner. The overall length was decreased, but the wheelbase was increased, and a rear sway bar was used in place of staggered rear leaf springs, resulting in better handling and cornering without the stiff ride. Aerodynamics were much improved over the first generation Road Runners, resulting in much-improved high-speed handling. 1972 saw new emission regulations drive power down and 1/4 mile times up. The 1972 model was nearly identical to the 1971 with a few minor changes. The grille design was cleaned up, and the tail lights were changed to match the new aerodynamic look of the grille. The optional bumper guards for 1972 included a rubber strip surrounding the tail lights and a rubber strip below the grille. The big difference came in the engines, with the big-block 383 being replaced by a larger-bore 400 CID version and a small-block, the 340, now optional for the first time. Also, for the first time, a 440 CID engine with a 4-barrel carburetor was available. This engine was the basis for the "GTX" package (as the GTX was no longer available as a separate model) that was available on Road Runners from 1972 to 1974.

Power ratings on all engines looked much lower on paper due to the new SAE net measurement system. The famed 426 Hemi was gone for 1972, and less than five 440 Six Barrels were produced. The 1973-74 models had more conventional squared-up front-end styling and minor changes to the rear that more closely resembled the four-door models than the 71-72s. 1/4 mile times were getting close to the 16s and further away from "musclecar" status. The base engine for the 1973-74 models had dropped down to Chrysler's workaday 318 CID V8; however, dual exhaust was still standard. After 1972, no 440 with four speed manual cars were built. The 400 was the biggest engine Plymouth offered with the four speed, which could also be had with the 340 (1973) and 360 (1974) engines. The 440 was still available for 1973 and 1974, but only mated to the 727 TorqueFlite automatic.

The 1975 model was based on the newly restyled, more formal-looking B-body which was now called the Fury (the former full-sized Fury being called "Gran Fury"). The largest engine now was the 400 (with single exhaust and only 190 horsepower); quarter-mile times were solidly in the 16-second range. Plymouth's most powerful engine, the 440, was restricted to police models.

In 1976 the Road Runner name was switched to the 2-door model of the replacement for the compact A-body Valiant/Duster series. This car, based on the new F platform, would be known as "Volaré". The new Road Runner was little more than a trim and graphics package; however, many suspension parts were borrowed from the police packages. A 360 CID engine was eventually offered as an option to the standard 318 V8, but only paired with the 3-speed automatic transmission. Rated at 160 hp (119 kW), the F platform's best 1/4 mile times would be just inside 16-seconds at 88 mph (142 km/h). Although no comparison to the earlier stormers, the 360 powered models were respectable performers in their time. However, performance continued to suffer, and by 1979 the 225 CID "Slant 6" became standard. The Road Runner continued as part of the Volaré line until its discontinuation in 1980.

Mopar Enthusiast magazine has released a concept rendering of a potential 2010 Roadrunner, with design cues based on the 1971-72 model.[4]