The original Plymouth Voyager was a twin of the Dodge B-series van from 1974 to 1983. Beginning in 1984 the Voyager name was applied to a new vehicle based on the Plymouth Reliant car. It was first introdouced as a "magic wagon", meaning that is was very similar to a station wagon, however it had more cargo room and removeable seats.The Voyager minivan, along with the similar Dodge Caravan (later joined by the Chrysler Town and Country) and the French Renault Espace were the first modern minivans; the Chrysler minivans are credited with creating the entire market segment for these vehicles in North America.

The Grand Voyager minivan was longer than the Voyager in both length and wheelbase, and had more cargo space. In addition, engine choices were different in most years to compensate for the greater weight of the Grand Voyager. Otherwise, the two vehicles were substantially the same.

Together with it's nameplate variants, the Dodge Caravan, Chrysler Voyager, Chrysler Town & Country and Volkswagen Routan, the Chrysler minivans have ranked as the 13th bestselling automotive nameplate worldwide, with over 12 million sold.[1]

The first Plymouth Voyager was manufactured from 1974-1983 as a rebadged Dodge Sportsman with 12-15 passenger capacity. The Voyager was Plymouth's first truck-bodied vehicle in many decades.

This Generation I Voyager minivan used the Chrysler S platform, which was closely related to the K-cars (Plymouth Reliant and Dodge Aries). The Voyager was on Car and Driver magazine's Ten Best list for 1985.[2] A three-speed TorqueFlite automatic transmission and a five-speed manual were available with the four-cylinder engines, including the turbocharged 2.5 L engine offered only in 1989 and 1990. 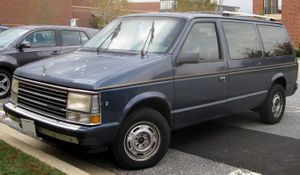 For 1987 the Voyager received minor cosmetic updates as well as the introduction of the Grand Voyager, which was built on a longer wheelbase adding more cargo room. It was available only with SE or LE trim.

The Generation I Voyager minivan was offered in three trim levels; low base, middle SE, and high LE, the latter bearing woodgrain-imprinted vinyl on the sides.

For 1987 the six- and eight-passenger options were withdrawn, leaving seating for five standard and for seven optional on the base and SE, and seating for seven with high-back front buckets standard on the LE, Grand SE, and Grand LE. Deluxe cloth upholstery was now standard on base and all SE models, with the luxury vinyl optional on SEs. On LEs, luxury cloth came standard and for the first time, leather seats were available on the LE models.

The Voyager was extensively redesigned for 1991, with more aerodynamic styling. They still used the S platform, though it was renamed the "AS platform". These were the last Voyagers that were derived from the Chrysler K platform. The trim levels for the Voyager were the base SE, midline LE, and highline LX; Grand Voyager trim levels were base SE and highline LE. The SE offered buyers the widest choice of option packages[verification needed], while the LE came with a great deal of standard equipment. The LX was available only in the short-wheelbase version, and was marketed as a more of a sport-luxury van,[verification needed] and came with the most standard equipment of them all, including alloy wheels, fog lamps, and wide array of power-operated features. The LE, however, could be ordered with all of these options at extra cost. Although the LX base price was higher than an LE, the LE could be ordered in the extended wheel base model with most of the options featured on the LX, thereby making the Grand Voyager LE the top of the line.

Interiors were much more differentiated in this generation than on the first, which shared many interior components with the Plymouth Reliant on which it was based, including an identical instrument panel and many interior trim pieces, to reduce development and production costs on a vehicle whose success was far from assured.[2]

In later years various trim packages were offered on SE models. The "Sport Wagon" package available from 1993-1995 featured accent color (gray) bumpers and molding, fog lamps, and special aluminum wheels. The "Rallye" package offered in 1995 was more luxury-oriented, with lower body two-tone paint — regardless of upper body color, the lower body was painted "Driftwood Beige" — silver aluminum wheels, and special badging. The font first used for the Rallye's badging was adopted for all of Plymouth's badging from 1996 onward.

Only badging and minor cosmetics differentiated the Voyager from its Dodge Caravan corporate twin. The headlamp trim was chromed on the Voyager but not on the Caravan, and the Voyager's park and turn signal lamps were shorter than those of the Caravan. The Voyager's taillights were horizontally corrugated, while the Caravan's, though the same size and shape, had had a black-mask effect. Voyagers used the chrome or body-colored eggcrate grille characteristic of all Plymouth models of the time, while the Caravan's bore the crosshair design used on Dodge's other models. The Chrysler Town and Country shared the Voyager's headlamps and taillights, but had its own chrome waterfall grille.

This generation of vans brought additional innovations, such as:

However, the turbocharged engine and Convert-A-Bed feature were dropped. [2]

Throughout this generation, the original sticker prices for the Voyager covered about a $10,000 range from a base to an LE AWD.[verification needed] The prices below are rounded to the nearest 25 dollars. 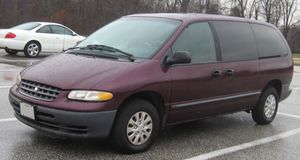 The 1996 redesign used the Chrysler NS platform and included a driver's-side sliding door, a first. The manual transmission was dropped. The vinyl woodgrain-appearance side paneling was no longer available. For this generation the Voyager was available in only base and mid-level SE models, the luxury LX and LE models, as well as the Sport weren't offered, as they were in the previous generation. It appears that "LE" models, of this generation were still sold in Canada[verification needed]. Also available was the Rallye (later renamed Expresso) trim package. Rallyes were simply an SE model with more upgrades (they were still badged as "SE's", with the "Rallye" badge on the front doors, rather than with the "Plymouth", "Voyager", and "SE" badges on the back). From 1997 onward, regular SE's received a "Plymouth" badge in the place of the "Rallye" or "Expresso" badges. Also, for the "Expresso" trim level, there was special grille insignia consisting of two silver lines on a black circular background. Possibly a new logo for it's retro styled future. Four-wheel drive was reintroduced in 1997. The Voyager was on Car and Driver magazine's Ten Best list for 1996 and 1997.

The Chrysler "Pentastar" logo appeared on the keys, steering wheel and on the side mouldings immediately behind the front wheels. The grille now features Plymouth's new "Sailboat" logo.

Base models of the Voyager were offered in most states with either a 2.4 L four-cylinder or a 3.0 L Mitsubishi V6 engine, except in California and several northeastern states, where the Mitsubishi V6 didn't meet emissions standards. In those locales, the 3.3 L engine was offered as the V6 option from 1997 through 2000. The manual transmission, never popular, was dropped. The 2.4 L four-cylinder engine produced more power than the 3.0 L Mitsubishi engine had in the first two generations.

Easy-Out Roller Seats In 1996, Chrysler introduced a system of seats to simplify installation, removal, and re-positioning— marketed as Easy-Out Roller Seats. When installed, the seats are latched to floor-mounted strikers. When unlatched, eight rollers lift each seat, allowing it to be rolled fore and aft. Tracks have locator depressions for rollers, thus enabling simple installation. Ergonomic levers at the seatbacks release the floor latches single handedly without tools and raise the seats onto the rollers in a single motion. Additionally, seatbacks were designed to fold forward. Seat roller tracks are permanently attached to the floor and seat stanchions are aligned, fascillitating the longitiudinal rolling of the seats. Bench seat stanchions were moved inboard to reduce bending stress in the seat frames, allowing them to be lighter.

When configured as two and three person benches (available through Generation IV), the Easy Out Roller Seats could be unwieldy. Beginning in 2001, second and third row seats became available in a 'quad' configuration — bucket or captain chairs in the second row and a third row three-person 50/50 split "bench" — with each section weighing under 50 lbs. The Easy-out system remained in use through Generation V — where certain models featured a two-person bench and the under-floor compartments from the Stow'n Go system.

There were not as many trim levels available as the previous generation, which is why the sticker prices didn't go as high. The prices below are rounded to the nearest 25 dollars.

In 1999 Plymouth's demise was announced, resulting in the 2000 Voyager/Grand Voyager models in the US doing double duty as both Plymouths and Chryslers.

Chrysler's plant in St. Louis, Missouri was responsible for building the Voyager from 1990 to 2000.