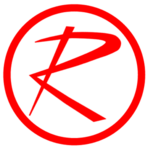 Rambler was an automobile brand name used by the Thomas B. Jeffery Company between 1900 and 1914, then by its successor, Nash Motors from 1950 to 1954, and finally by Nash's successor, American Motors Corporation from 1954 to 1969. It was often nicknamed the "Kenosha Cadillac" after its place of manufacture.[1] 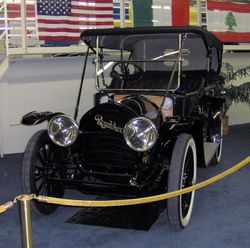 The first use of the name Rambler for an American made automobile dates to 1897 when Thomas B. Jeffery of Chicago, Illinois and builder of the Rambler bicycle, constructed his first prototype automobile.

After receiving positive reviews at the 1899 Chicago International Exhibition & Tournament and the first National Automobile Show in New York City, Jeffery decided to enter the automobile business. In 1900, he bought the old Sterling Bicycle Co. factory in Kenosha, Wisconsin, and set up shop.

Jeffery started commercially mass-producing automobiles in 1902 and by the end of the year had produced 1,500 motorcars, one-sixth of all existing in the USA at the time. The Thomas B. Jeffery Company was the second largest auto manufacturer at that time, (behind Oldsmobile).

Rambler experimented such early technical innovations as a steering wheel (as opposed to a tiller), but it was decided that such features were too advanced for the motoring public of the day, so the first production Ramblers were tiller-steered. Rambler innovated various design features and was the first to equip cars with a spare wheel-and-tire assembly. This meant that the driver of a Rambler, when experiencing one of the all-too-common punctures (flat tires) could simply exchange the spare wheel & tire for the flat one. Previously it had been necessary to remove the wheel from the car, demount the tire, patch the inner tube, re-mount the tire, inflate the tire, and re-mount the wheel. The interchangeable wheel and a spare tire made travel a lot easier on primitive roads that were littered with stray horseshoe nails. The punctured tire could then be repaired at a more convenient time and place.

In 1914, Charles T. Jeffery, Thomas B. Jeffery's son, replaced the Rambler brand name with Jeffery in honor of his now deceased father.

In 1916, the Thomas B. Jeffery Company was purchased by Charles W. Nash and became Nash Motors Company in 1917. The Jeffery brand name was dropped at the time of the sale and the manufacture of Nash branded automobiles commenced. In 1937, the concern became the Nash-Kelvinator Corporation through a merger with the well-known appliance maker.

The Nash Rambler served as the platform for the first generation Rambler American 2-door sedan shown above.

Under the direction of Charles Nash's successor George W. Mason, Nash-Kelvinator Corporation began development of a small car that could be produced inexpensively for the post World War II economy.

However, steel shortages limited the amount of raw materials that Nash could get, so Mason turned the compact, now designated the Rambler, into a two-door sedan with a convertible top and the cars were equipped with many standard features that were typically options, to maximize profits for the company. When introduced, the Rambler was an immediate success for Nash. As steel quotas (related to the Korean War) eased, the Rambler line was broadened in both its model types (four-door sedan and station wagon) and price points, which proved to be as successful as the first generation of two-door sedan convertibles.

The first generation of modern Ramblers carried a modified version of Nash's Airflyte styling, which included closed wheel openings. Where the wheel openings of any car are a major source of wind resistance, the design was rather primarily an engineering design to increase the strength of the car for impact resistance. Many people surmised that the skirted fenders limited the turning radius of the wheels but was not an actual handicap for having a comparatively narrow front track. Ramblers continued to use this styling until 1955, when the front wheels were revealed by a periodic design update.

In 1954, American Motors Corporation (AMC) was formed from the merger of Nash-Kelvinator and the Hudson Motor Car Company. Following the merger, Ramblers were badged as both Nashes and Hudsons, with no visible difference between the two. The Nash and Hudson makes were continued through 1957, after which all of AMC's offerings were marketed as Ramblers, with the exception of the imported 1958-1962 Metropolitan. 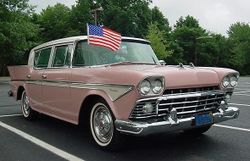 At the start of the 1960s George Romney made a marketing decision that more fully unified the various Rambler model names under the Rambler brand. In 1962, the Ambassador, a top-trim level model, was officially brought under the Rambler name (it had previously been the "Ambassador by Rambler"), and the former Rambler Six and Rambler Rebel V8 were renamed the Rambler Classic. (Note: while the top-line models for 1958-1961 were advertised as the "Ambassador V-8 by Rambler", on the cars themselves, the nomenclature was always "Rambler Ambassador".)

Romney also put into play his plan to slash production costs, which involved more common parts sharing between the Ambassador and Classic models. Beginning in 1962, all "senior" Rambler models would share the same wheelbase and body parts, with engine, trim and equipment level distinguishing the Classic from the Ambassador. Better still, major stamped sheet metal panels were shared between the new 1963 Ambassador/Classic body and the new 1964 American body.

In 1963, the entire Rambler line received the Motor Trend Car of the Year award. However, Romney's departure to become Michigan governor opened the door for his successor, Roy Abernethy, to redirect the company towards a strategy of competing head to head with the Big Three (General Motors, Chrysler Corporation, and Ford Motor Company) with a variety of bodies and automobile platforms. This new plan also included marketing the various models apart from the Rambler brand name, which Abernethy felt would be a hindrance in the market segments he hoped to pursue.

One of the first moves in that direction was the creation of the 1965 line of Ramblers, which split the Classic from the Ambassador visually, while still sharing a significant number of parts. Once again the Ambassador had a unique, extended wheelbase. In addition, AMC introduced the Marlin, a hardtop coupe intended to give AMC a toe-hold in the sporty fastback market.

Backed by marketing reports, Abernethy next made a persuasive argument to the AMC board that the Rambler name had not only acquired a stodgy image and was a hindrance to increasing sales, but that consumers associated it with compact cars. In what hindsight would show to be an ill-conceived decision, American Motors began to phase it out in favor of an AMC marque beginning in 1966, as it attempted to become a multiplatform automobile manufacturer. Retention of the well-known Rambler brand name and its association with compact economy models could have served AMC well in the 1970s.

By 1968, the only vehicle produced by AMC to carry the Rambler marque, was the compact Rambler American. Although designed as a no-nonsense economy car, the American spawned the audacious SC/Rambler developed with Hurst Performance.[2] For the final year in 1969 the models were simply called Rambler. The last one was produced on June 30 1969, and it was one of over 4.2 million cars to carry the Rambler name that rolled off the assembly line in Kenosha.[2]

The Rambler marque was continued in numerous international markets. Examples include AMC Hornets and AMC Matadors assembled by the Australian Motor Industries (AMI) from complete knock down (CKD) kits that continued to be badged as Ramblers until 1978. The Rambler nameplate was last used on automobiles in 1983 by Vehiculos Automotores Mexicanos (VAM) in Mexico.

In Argentina, the Rambler American became the IKA Torino in 1967. It then became the Renault Torino and was offered until 1980.