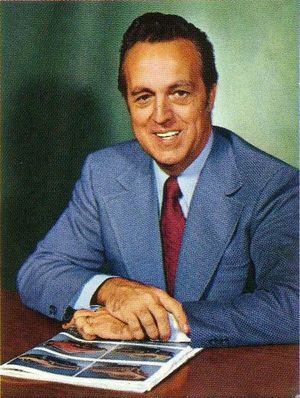 Richard Teague at American Motors during the 1970s

Richard A. (Dick) Teague (December 23 1923-1991), born in Los Angeles, California was an industrial designer in the North American automotive industry. He held automotive design positions at General Motors, Packard, and Chrysler before being named Vice President of Design for American Motors Corporation (AMC). His son, Jeff Teague, is also an Industrial Designer.

As a child, Teague was an actor, appearing in shorts popular for the time. However, he suffered a tragedy at the age of six. A car accident left his mother an invalid, while the young Teague sustained serious injuries including the loss of sight in his right eye, meaning he could not join the armed forces. Instead, he worked as an aircraft technical illustrator for Northrop Corporation. His boss was Paul Browne, a former designer at General Motors, and he suggested that Teague take night classes at the Art Center College of Design.

After World War II, Teague penned a design for a pre-Henry J economy car for Kaiser Motors. In 1948, he accepted a position in the General Motors design studios headed by Edmund Anderson. He started as an apprentice stylist and eventually graduated to the Cadillac advanced design group. Teague also worked on the famed 1950 Oldsmobile Rocket. During the 1950s outlandish use of chrome on cars, Teague described how two sets of overlay designs were made for Harley Earl to choose from. Both chrome trim sets had been put on one Oldsmobile prototype by mistake. Earl saw it and ordered it produced that way although the stylists were horrified.[1]

In 1951, Packard Motor Corporation recruited Teague and offered him to be the Chief Stylist following John Reinhart's resignation. The restyled senior Packard line for 1955 was the outcome of Teague's keen eye for detail and his ability to produce significant changes based on limited budgets. The facelift made Packard’s 1951 body shell look almost new. However, the company was not doing well following the purchase of struggling Studebaker. Moreover, sales of the luxury Packard collapsed during 1956. Teague designed the last Packard concept car, the Predictor.

By 1957, the entire Packard styling team moved to Chrysler Corporation. Consequently, Teague became chief stylist of Chrysler's studio. However, because of management conflicts, Teague decided to work on non-automotive assignments for an independent design firm. 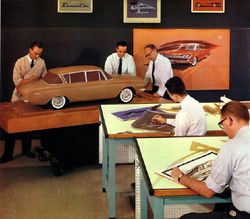 AMC designers in 1961. Teague is standing by the scale model's left front fender

Eager to get back to designing automobiles, Teague joined American Motors Corporation (AMC) as a member of Edmund E. Anderson's design team in 1959. When Anderson left AMC in 1961, Teague was named principal designer. The first cars influenced by Teague's styling were the 1963 Rambler Classic and Ambassador, the first all-new cars from AMC since 1956.[2] Teague was promoted to the post of Vice President in 1964. He held that executive position until he retired from AMC in 1983. At his retirement, Teague joked that the only Detroit auto company he had not worked for was Ford.[3]

Teague was often quoted as referring to his many years at AMC years as "Camelot", although he faced very stiff budget restrictions at the small independent automaker. Nevertheless, Teague worked out relative miracles compared to the spending norms in this industry.[4] For example, he was able to design the totally new 1964 compact Rambler American by using the doors from AMC's large-sized automobiles. Teague was a master of designing many variations of cars for AMC from a very limited number of basic stampings. The AMC Cavalier was a mid-1960s concept car developed to demonstrate this technique of interchangeable body panels. The right front and left rear fenders were identical, as well as the panels for doors, hood, and deck lid all interchanged. AMC’s production platforms designed by Teague featured numerous interchangeable door skins, glass, and more. For example, the front and rear bumpers on the 1970 AMC Hornet were cleverly made from the same stamping. This design talent yielded significant cost savings for the company. Chilton's Automotive Industries magazine named Teague "Man of the Year" in their February 1 1976 issue.[5]

Teague was responsible for the design of many AMC cars and Jeep vehicles.[6] He developed the characteristic and now legendary Gremlin, Pacer, as well as the Matador coupe. His successes also included the Rambler American, AMC Javelin, AMX Hornet, and subsequent successful transformation of the compact platform into the Concord, Spirit and Eagle. Teague was also responsible for a number of concept cars and often lobbied for their production, such as the compact Tarpon which led to the Marlin, and continuing production of the two-seat AMX models after 1970. According to experts, many of Teague's designs still look fresh.

Many concept cars bore his signature design ideas that were later incorporated into production models. Among these were the 1968 AMX GT. Teague styled a truncated kammback rear for this short wheelbase sports car that was then used on the 1970 Gremlin. A series of "Concept 80" show cars also addressed models that AMC was considering in the future. They were Teague's variations on the company's existing vehicle platforms.

His last handiwork can be seen in the highly popular downsized Jeep Cherokee (XJ), a "masterpiece" design and paradigmatic model that was built in the United States from 1983 through 2001 and in China to 2005.[7] The last cars he worked on were AMC's new large platform (Premier) that was scheduled to debut in 1988. Teague was able to fashion a very roomy interior for these cars. His design was very aerodynamic and the two-door model was to feature hidden headlamps.[3] However, the coupe was never produced. Instead, Giorgetto Giugiaro was contracted to provide sharper edges for the four-door sedan that came out as the Eagle Premier.

Teague was a noted automobile historian and collected classic and rare vehicles, as well as other auto memorabilia. He mentioned that he had owned "400 or 500" cars.[3] Teague's collection included a rare AMX/3. It was donated to the San Diego Automotive Museum along with most of his papers.[8]