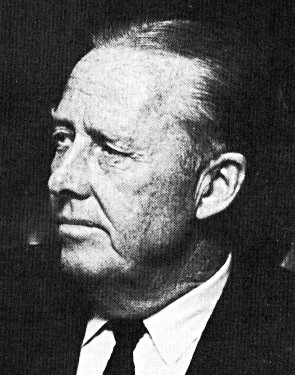 Robert B. Evans at American Motors during the 1960s

Robert Beverley Evans (March 19 1906 in Richmond, Virginia – August 17 1998 in Grosse Pointe Shores, Michigan) An automobile industry executive, he was a prominent republican, an industrialist, a socialite, and an avid sportsperson.[1] He founded Evans Industries and also became chairman of American Motors Corporation (AMC).[2]

In 1966, Evans bought 200,000 shares of AMC common stock (worth US$3 million at that time; thus about $20 to 30 million in 2006[4]) and became the firm's largest shareholder.[5] As sales of automobiles were weak industry-wide in 1966 and AMC was facing major losses, Evans was named chairman of the board. He replaced Richard E. Cross, who continued as a director and chairman of the executive committee.

Evans is credited with turning the company around from the strategy of matching the Big Three American automakers nearly model for model that was promoted by Roy Abernethy. It was Evans who brought on the major changes by handpicking Roy D. Chapin Jr. as AMC's general manager. Evans was always encouraging the styling and engineering staffs do things differently - to try new ideas and find new ways to design and build cars.[6] He is also credited as the champion for AMC to build a production version of the AMX, a two-seat sports model, from the concept car that was part of the Project IV showings.

In January 1967, a contentious AMC board of directors meeting resulted in the firing or "early retirement" of Abernethy, as well as with the "resignation" of Evans. They were replaced by William V. Luneburg (President) and Chapin as the new Chairman.[7]

He died at his residence in Grosse Pointe Shores, Michigan. He was survived by his two children, Jane Evans Jones and Robert B. Evans, Jr.[3]