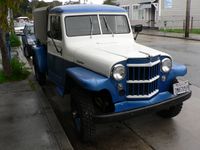 The Willys Pickup was similar to the Willys Jeep Wagon and the VJ-2 and VJ-3 Willys Jeepster. It was introduced in 1947, with model designations of 2T and 4T. These trucks were equipped with the 134 cubic inch "Go-Devil" engine and the three-speed Borg-Warner T-90 transmission from the CJ-2A. The truck received a facelift in 1950 and became the 473, with the new "Hurricane" four-cylinder engine as an option. This model introduced the v-shaped front end with five horizontal bars, as well as an updated gauge cluster. The steps on the side of the pickup box were deleted. After 1950, the two-wheel drive model was discontinued. In 1953, the model designation became 475 and the grille bars were reduced to three. A 226 cubic inch six-cylinder 6-226 model was introduced in 1954, and sales of 475 models dropped considerably. The 6-226 was dropped in 1962 in favor of the 6-230 Tornado OHC engine.

It was available with only one transmission, the Borg-Warner T-90 three-speed manual. A Spicer 18 transfer case was used on 4WD models. The heavy duty Timken 51540 was an early rear axle option, otherwise the Dana 53 was standard. The front axle was a Dana 25. A 5.38:1 differential ratio was standard, and a 4.88:1 was optional.

Over 200,000 of these trucks were manufactured.