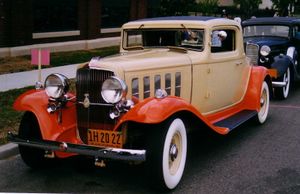 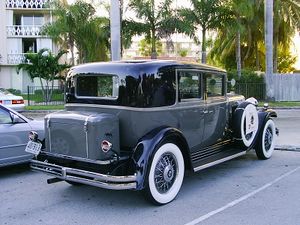 Nash Motors' first use of the name Ambassador was during the 1927 model year when a specially trimmed four-door, five-passenger club sedan version of the "Nash Advanced Six" (designated model 267) was developed. As the most expensive car in the line, the Ambassador received premium upgrades in upholstery and other trim items for a base price of US$2,090 (FOB). The Ambassador model lost its position as Nash's most expensive car in 1929 with the introduction of seven-passenger sedan and limousine models that were carried through the 1934 model year.

The Ambassador remained in the Advanced Six range until 1930 when the model was moved to the "Nash Twin Ignition Eight" series. In 1931 the cumbersome Twin Ignition Eight name was replaced by the simpler "Eight-90" model designation. 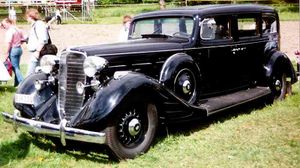 In mid-1932, Nash established the "Ambassador Eight" as a stand-alone model range, offered in a number of body styles, including coupes and victorias. Riding on 133 inch (3378 mm) and 142 inch (3607 mm) wheelbases, and sumptuously appointed, these cars earned the title of the "Kenosha Duesenbergs" for their quality, durability, styling, and speed. This was part of Nash's second 1932 series, which included completely new bodies and engineering updates to all models produced by the company. Aside from General Motors, Nash was the only automobile manufacturer to make a profit in 1932.

For 1934, Nash introduced completely new styling, called "Speedstream", featuring generous use of ornamental moldings in body panels and fenders, in a very streamlined and Art Deco way. The Ambassador Eight series for this year was limited to various four-door sedan body styles. The 1935 model year saw yet another complete re-styling, known as "Aeroform", and a further trimming of body styles, as well as a new a two-door sedan added to the Ambassador Eight series. However, the 1935 Ambassador Eight was now built on a much shorter 125 inch (3175 mm) wheelbase, and used the smaller, former Advanced Eight engine. No longer would Nash build the big, classic cars of 1930-1934. 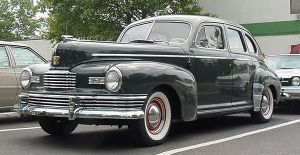 While the Ambassador had been offered only with Nash's in-line eight from mid-1932 to 1935, the 1936 Ambassador Six added Nash's largest in-line six as well, in a 121 inch (3073 mm) wheelbase model, formerly known as the Advanced Six. In 1937 Nash acquired the Kelvinator Corporation as part of a deal that allowed Charlie Nash's handpicked successor, George W. Mason, to become President of the new Nash-Kelvinator Corporation. The 1937 models saw the return of coupes and convertibles to the Ambassador lines. From 1935 onward, the senior Nash models used identical bodies, relying on a longer wheelbase, hood and front fenders (plus subtle trim augmentations) to provide visual cues to differentiate the more expensive Eights from the less expensive Six models. Beginning in 1937, even the low-priced LaFayette series came under this plan. This basic formula was used through the final AMC Ambassador in 1974, with the exception of 1962-1964, when the Rambler Ambassador and the Rambler Classic shared the same wheelbase and front sheet metal.

For the 1941 and 1942 model years (only) all Nash vehicles became Ambassadors, and rode both long and short wheelbases. The Nash Ambassador 600, built on a 112 inch wheelbase, became the first popular automobile to be built using the single-welded "unibody" type of monocoque construction, which Nash called "Unitized", rather than a body-on-frame. From 1941 through 1948, Nash Ambassador models placed this unibody structure on top of a conventional frame, thus creating an incredibly solid and sturdy automobile. The 1941 Ambassador 600 was also the only Ambassador ever powered by an L-head engine. Nash would remain with this model arrangement through the post-war 1946-1948 model years, although the 600 would no longer be known as an Ambassador.

As ordered by the Federal government, Nash suspended passenger car production during World War II (1942-1945). When production was resumed after the war, the Eights were no longer part of the program. The 1946 Ambassador Six was now the top of the Nash line. (Although catalogued, some doubt whether any 1941 Ambassador Eights were actually produced.)

Nash continued to use the Ambassador name on its plushest models from 1949 to 1957. N-K President George Mason was an outspoken supporter of aerodynamics in car design, and the post war Ambassador is best remembered for its enclosed front wheels. When Nash rolled out its Airflyte body style, Ambassador sales enjoyed a significant gain by selling just four door and two door sedans in the 1949-1951 market place. The Airflytes also featured fully reclining seats that could turn the car into a vehicle capable of sleeping three adults, however this would also earn the dubious distinction of being the make-out automobile of choice for teenagers coming of age in the 1950s. The 1950 Ambassador became the first non-General Motors automobiles to be equipped with GM's Hydramatic automatic transmissions.

Mason believed that once the sellers market following World War II ended, that Nash's best hope for survival lay in a product range not addressed by other car manufactures in the United States at that time – the compact. With sales of the large Nash's surging ahead of prewar production numbers, Mason began a small car program that would eventually emerge as the compact Nash Rambler reviving the traditional Rambler marque.

The Nash Ambassador received its last complete restyle in 1952 that carried over into 1954 almost unchanged. The Golden Anniversary Pininfarina Nash, styled by Pinin Farina, received several prestigious design awards. Due to materials restrictions caused by the Korean War, Nash sales, like those of many other carmakers, dropped off sharply in 1952. With the end of the War, a battle for market leadership began between two historic rival automakers. The 1954 sales war between Ford and Chevrolet meant both divisions were shipping vehicles to their respective dealers no matter if there were any orders for them. Ford and GM dealers were often larger with stronger finances and they offered deep discounts to sell these cars. This caused a severe sales toll on all the independent carmakers (Hudson, Kaiser, Packard, Studebaker), and Nash was no exception. Airflyte styling entered its final season with the heavily facelifted 1955 versions, created under the direction of Edmund E. Anderson. "Scenaramic" wrap-around windshields accompanied an entirely new front-end treatment, which showed more front wheel than Nash had revealed since the 1949 models debuted. Ambassadors were now available with a V8 engine for the first time, supplied by Packard, and mated to Packard's Ultramatic automatic transmission. 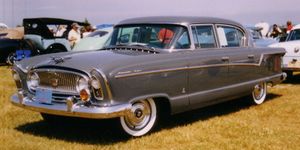 Nash models fielded for 1956-1957 were heavily re-styled in the rear, and offered in a variety of two-and three-tone color schemes. The 1957 models were the first cars to come equipped with "quad" headlights as standard equipment. While Nash Ambassador styling may have suffered somewhat, the cars did offer Nash's highly acclaimed Weather Eye heating and ventilation system, which could also be equipped with Nash's advanced automotive air conditioning unit. While other manufacturers in America at the time offered A/C on some models, their air conditioning units were driven by a large and heavy, trunk mounted expander and heat exchanger that carried the air into the car via clear plastic tubes and out through ceiling mounted vents. Nash's unit was inexpensive, compact, fit under the hood, and could either circulate fresh or recycled air. This system also sold for about half the price of most other automotive air conditioning systems of the time.

Nash-Kelvinator merged with ailing Hudson Motor Car Company as of January 14 1954 to form American Motors Corporation (AMC), and both Nash and Hudson dealers sold Ramblers that were identical save for the "Nash" or "Hudson" badging. Although the "senior" Nash and Hudson models continued to be marketed, it was sales of the Rambler that were powering the company's bottom line. As the compact Rambler's fortunes increased, sales of the senior Nash cars, including the Ambassador, plummeted.

The final Nash Ambassador rolled off the Kenosha, Wisconsin production line in the summer of 1957. Nevertheless, the Ambassador - as a top of the line model name - would continue to exist under Rambler and AMC brands all the way through 1974.

Eight Nash Ambassadors were entered in the 1950 Carrera Panamericana, a 2,172-mile (3,495 km) endurance race run over five days across Mexico. Three finished but the highest-placed was disqualified.

The 1950 model driven by Roy Pat Conner was in sixth place on the ninth and final stage, 33 minutes behind the leader, when Connor became too ill to continue. Curtis Turner, who shared another '50 Ambassador with Bill France, purchased Conner's car for its superior race position, replaced Conner at the wheel and left France to continue without him. Punctures had delayed many participants, among them a race favorite, Grand Prix driver Piero Taruffi, whose Alfa Romeo 6C 2500's tire problems had held him to 28th place on the third stage.[1] By the eighth stage he was up to ninth place. On the final stage Taruffi had improved to fourth when Turner passed him in the mountains by bumping the Italian until he yielded the place. Taruffi took it back when the Nash, in turn, was temporarily halted by a flat tire. But at the finish, with Taruffi in Turner's sights, the elapsed time of the ill-handling, underpowered Nash[1] beat the Alfa by 11½ minutes to put Turner in fourth place behind a Cadillac 62.[2] However, regulations prohibited changing a car's crew and he was disqualified, which handed fourth, with a time 27 minutes behind the winning Oldsmobile 88, to Taruffi,[3], who would win a year later.

Bill France eventually crashed out of the race but the damage did not prevent the Nash being driven back to the U.S.A., where France and Turner used it for a full season's dirt track racing in the Southern states.[1]

The France/Turner entry was one of four Nashes that crashed out. A fifth retired with engine trouble. Santoyo's 1949 Ambassador was classified 36th out of the 47 finishers and another '49 model came 39th.[2]

The Nash Motor Company was the first manufacturer that actively supported NASCAR racing. Ebenezer "Slick" Smith drove an Ambassador in the September 24 1950 NASCAR race at North Wilkesboro Speedway. (This was the same car that Bill France had crashed in the Carrera Panamericana.) Smith crashed midway through the race and finished 20th in the field of 26. [4]

For the 1952 NASCAR season, other automakers became more involved. Nash recruited and signed dynamic stars Curtis Turner and Johnny Mantz. Curtis Turner won the 150-lap NASCAR Grand National race at Charlotte Speedway on April 1 1951. This is the only win for Nash in NASCAR.[5]