Eagle was a marque of the Chrysler Corporation following the purchase of American Motors Corporation (AMC) and aimed at the enthusiast driver.

Though short-lived, the Eagle Vision sedan sold in respectable numbers, while the sporty Talon coupe sold more than 115,000 units.

The Eagle name was taken from the AMC Eagle, the last of American Motors' wholly U.S.-designed vehicles. The Jeep/Eagle division of Chrysler Corporation was formed after Chrysler's 1987 buyout of American Motors. The vehicles were marketed primarily by AMC dealers along with Jeep products.

Two of Eagle's first models, the Eagle Premier and the Eagle Medallion, were designed by AMC in cooperation with its former corporate partner (and 46.4 percent owner), Renault. The remainder of the brand's cars were simply rebadged versions of cars sold by other Chrysler Corporation divisions, as well as some captive imports produced by Mitsubishi Motors.

Throughout its history, the Eagle brand suffered from a lack of product recognition. Most of Eagle's models were offered in Chrysler-Plymouth, Dodge, and Mitsubishi dealerships under different guises. Chrysler was in the midst of financial difficulty at the end of the 1980s, and did not have as much money to spread to its new automotive division. Moreover, Jeep vehicles were quite popular and profitable, so most of the division's marketing resources flowed to the Jeep product range. This confused buyers, as many mistakenly thought that Eagle's cars were "Jeep Eagles". Since Jeep's products had better recognition and higher profit margins, many dealers placed greater emphasis on Jeeps, and considered the Eagle line of passenger cars to be a distraction to that business. Their sales and service expertise was primarily in the four-wheel drive Jeeps and AMC's Eagle all-wheel-drive models.

Furthermore, following Chrysler's acquisition of AMC, there was a realignment of the dealership network. Some former AMC/Jeep dealers were consolidated with Chrysler-Plymouth franchises. Up to this point, Chrysler-Plymouth outlets did not have a sport utility vehicle (SUV) to sell, and adding the Jeep line helped dealers offer customers a larger range of vehicles in a rapidly growing market segment. The merger may have helped the individual dealerships that signed on, but it caused the nascent Eagle division and its largely derivative models to compete unfavorably for attention with Chrysler's and Plymouth's often similar, but longer-established and better-recognized, lines of passenger cars.

After a decade of slow sales, the Chrysler announced the discontinuation of the Eagle brand in November 1997, and the last 1998 Eagle Talon rolled off the line shortly thereafter.

The Eagle brand was phased out in stages. In 1996, Chrysler discontinued the Mitsubishi Mirage-based Eagle Summit, having canceled the nearly identical Dodge Colt, and Plymouth Colt models after the 1994 season. In 1997, the Eagle Vision was discontinued at the end of its design cycle, though the similar Dodge Intrepid and Chrysler Concorde were redesigned for 1998 and continued through 2004. Only the Mitsubishi Eclipse-based Eagle Talon remained for 1998, after which it, along with the Eagle brand itself, was discontinued.

Chrysler had originally planned to redesign the Eagle Vision for 1999. Prototypes were even spotted wearing the Eagle logo, and Vision production continued into September 1997 to provide dealers with enough stock of the older car to carry them through to the new car's introduction. However, Chrysler executives decided to pull the plug on the Eagle brand just a few months later. The car they were working on went on to be marketed as the Chrysler 300M. 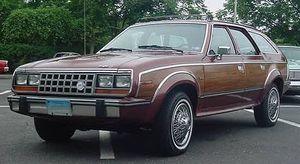 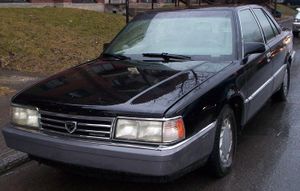 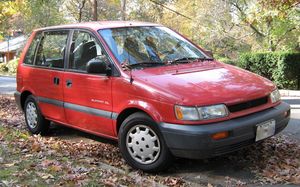 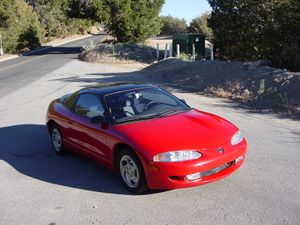 The continuation of the AMC Eagle line, production ended December 14, 1987.

Also badged as the Renault Medallion in 1987, this car was imported and was very similar to the Renault 21.

Designed by AMC, the Premier was also briefly badged as the AMC Premier and Renault Premier in late 1987 and early 1988. It shared several parts with the Renault 25, and spawned a rebadged version named Dodge Monaco (1990–1992).

Two models were offered. The 3-door hatchback and 4-door sedan were rebadged Mitsubishi Mirages, and the station wagon (badged as either an Eagle Vista, or a Dodge/Plymouth Colt Vista) was a rebadged Mitsubishi Chariot. Both were sold only in Canada.

Similar to the Plymouth Laser and the Mitsubishi Eclipse, the Talon was Eagle's halo car and outsold its Plymouth cousin. (see also Diamond Star Motors)

A rebadged Mitsubishi Galant, sold only in Canada.

One of Chrysler's three original LH-cars. Sold in Europe as the Chrysler Vision.

Chrysler discontinued production and retired the Eagle brand after 1998. This decision can be attributed to the following reasons.

Throughout its life, every model in the Eagle brand name, was a badge engineered vehicle, as either a Mitsubishi or other Chrysler product. As a result, some buyers turned to the same vehicle that was marketed under more popular brand, such as Dodge, Plymouth, or Mitsubishi, instead of investing in the Eagle branded version. Analysts credit the reason why Eagle never got a foothold in the market because it did not have unique products.

The Eagle brand did not establish a specific market segment. This was because Eagle's lineup was diverse, and was never solidified into a particular niche market. While the Summit would compete with Toyota and Honda, the Vision and Talon competed with Pontiac. Mostly though, the Eagle brand was never able to find a place in Chrysler's lineup, as Eagle's cars competed more with Chrysler's other divisions than with the competition from other automakers. Chrysler marketed the Eagle as a sporty brand, although the company already had Dodge as its performance oriented brand. The Eagle mostly competed with Dodge, while the compact Summit competed with Plymouth, and the Vision was up against the other Chrysler LH platform derivatives.

Eagle also lacked the heavy advertising of the other Chrysler brands. This could be because of limited resources and a lack of enthusiasm within the company for marketing the Eagle properly. Among the large cars, for example, not only were the Concorde and Intrepid advertised more, but promotional shots with all the three of them, the Vision is always either in the back or the smallest of the three. In one picture, the Vision is partially blocked from view by the Concorde.

Eagle was sold on the same showrooms as Jeep, as Chrysler had organized themselves into three divisions: Dodge (by itself), Chrysler-Plymouth, and Jeep-Eagle. The grouping of Jeep and Eagle seemed counterintuitive, as there was little overlap in the customer base for the two brands. Most Jeep buyers were not interested in purchasing the passenger cars offered by Eagle. In 1993, Chrysler launched the Jeep Grand Cherokee as a competitor for Ford's Explorer, and as a result, many buyers who went into the Jeep-Eagle showrooms were either interested in buying the Grand Cherokee, or got distracted from the Eagle cars by the more popular Jeep vehicles. Most of the long-established AMC/Jeep dealers considered the Eagle models to be less profitable than their Jeep business. American Motors had phased out domestic built passenger cars after 1983 and their dealer sales and service expertise was focused on the higher margin 4WD vehicles.

The name Eagle was also used by Dan Gurney for his racing cars. Among them the most noticeable is probably the 1967 Eagle-Weslake Formula One, considered by many as one of the most beautiful F1 cars ever built.