From Dodge Wiki
(Redirected from Plymouth Volare)
Jump to navigation Jump to search
Not to be confused with Chrysler Aspen.

The Dodge Aspen, produced from 1976 to 1980, was a compact car from Chrysler Corporation's Dodge division; its Plymouth-branded counterpart was the Volaré. It was launched as a two-door coupe, a four-door sedan, and a unique-for-the-segment station wagon. It replaced the Dodge Dart. By the end of their production run, the Aspen and Volare would be considered intermediate cars.

The Dodge Aspen and Plymouth Volaré were introduced in the fall of 1975 as 1976 models, and were collectively named Motor Trend's "Car of the Year" for 1976. They were the successors to the A-body Plymouth Valiant and Duster and Dodge Dart. The Dart, Valiant, and Duster were sold alongside the Aspen and Volaré for part of the 1976 model year, then discontinued.

The Aspen and Volaré were produced for 5 model years, 1976 through 1980. For 1981, they were replaced by the smaller front wheel drive K-cars — the Dodge Aries and Plymouth Reliant — and the M-body Dodge Diplomat and Plymouth Gran Fury, which were very similar in structure, size, and engineering to the F-body Aspen and Volaré.

The Aspen and Volaré were designed to be somewhat more luxurious than the A-body models, at least in the most expensive models. The new cars also continued the A-body pattern of different wheelbases for coupés versus the sedans and wagons. Aspen and Volaré 2-doors had a 108.7-inch (2,760 mm) wheelbase. Sedans and wagons got a 112.7-inch (2,860 mm) wheelbase.

This vehicle was intended to be a combination of aerodynamics, body design and an all-new front suspension to make the new Aspen "the quietest riding and best handling compact ever built by Chrysler," said S.D. Jeffe, Chrysler executive engineer - chassis engineering.[1] 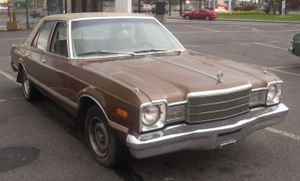 The vehicle was wind-tunnel tested to be aerodynamically sound in its fuel conservation potential as the complete aerodynamics development program included a wide range studies from drag reduction to crosswind stability, wind noise and ventilation performance. The effects of this testing resulted in softened front end contours, removal of drip troughs and helped shaped internal air flow ducting. [1] Body engineering in the Aspen was executed using computer technology; unit body engineering was conducted by use of clear plastic stress models that showed up stress points before any sheet metal was formed. Weight reduction to provide maximum fuel economy was achieved through use of thinner glass, lighter weight side door beams and high-strength, low-alloy brackets and reinforcements that were four times as strong as conventional milled steel. A reduced number of stampings resulted in better panel fits and fewer welds. The Aspen had improved visibility and compared with other Dodge compacts, the Aspen provided a total glass area increase of 25% on two door models and 33% on sedans.[2]

Wheel alignment adjustments such as caster and camber could be made by removing plates over the wheel housings. The new isolated tranverse suspension system was a substantial departure from the longitudinal torsion bars Chrysler had introduced in 1957 and used on all models since that year, until the release of the F-bodies.[1] The transverse (side-to-side) bars weren't as geometrically favorable but saved space and weight.[citation needed] In addition, the new front suspension system was touted as giving a "big car ride" as the suspension had a low, or softer, fore and aft compliance which allowed the wheel to move rearward instead of straight up and down when the tire encountered an object, dampening the blow and rolling with the condition of the road.[1] The two parallel torsion bars and an anti-sway bar were mounted forward of the front wheels, integrated into a spring-strut front suspension. These components were attached to a K-shaped structural crossmember. The K-shaped crossmember was isolated from the unitized car body by four rubber mounts. This transverse torsion bar suspension was also incorporated into the M- and J-body cars. The conventional leaf spring rear suspension was also rubber-isolated, so there was no metal-to-metal path through which road noise or vibration can be transmitted to the body; even the steering column was isolated.[1]

Although their designs were basically sound and well-engineered,[original research?] the early F-bodies were plagued by poor production quality. In fact, in his autobiography, Lee Iacocca acknowledged that the Aspen and Volaré were probably rushed to market too soon, causing early buyers to act as final model testers.[citation needed] This was true mostly of the 1976 models, since the 1977 models were considerably better quality-wise.[original research?] Several recalls were undertaken on the 1976 and 1977 models; most were minor. However, the most serious of these cost Chrysler millions of ill-afforded dollars. In 1978, Chrysler recalled every 1976 and 1977 Aspen and Volare for possible replacement of the front fenders, which were prematurely rusting. Many cars got new fenders, painted in the proper color. Galvanized sheetmetal was phased in for the body, along with full inner front fender liners made of polyethylene (plastic) to solve the rust problem once and for all. A large number of powertrain changes, particularly in ignition and fuel delivery, were also made to improve driveability. After 1977, F-bodies had few problems with rusting or quality control.[citations needed]

R.M. "Ham" Schirmer, manager of Dodge car and corporate advertising for Chrysler, said that the Aspen name originated from the codename Aspen-Vail when the project for it and the Plymouth "sister car" began in 1971. [3] "Aspen is a very pleasant name," Schirmer said, "people think of the outdoors, but not necessarily skiing when they hear it. . . It won't inhibit where we want to position the car because it's basically neutral."[3] Nonetheless, Chrysler sponsored the 1976 Dodge Aspen Team K2 Freestyle and opened up World Pro Skiiing's seventh season in Aspen, Colorado as the Dodge Aspen Cup running coarses on Aspen Highlands and Aspen Mountain. In print and media, actor Rex Harrison was spokesman for the Aspen who's advertising campaign was inspired by the "Ascot Gavotte" scene in Harrison's My Fair Lady; singer Sergio Franchi was the spokesman for the Volaré and sang the song of the same name in TV and radio commercials with altered lyrics.

Station wagons were available in both model lines, all featuring liftgates with fixed rear windows. These models had a cargo volume of 71.9 cubic feet (2.04 m3) and load capacity of 1,100 lb (500 kg), which was 100 lb (45 kg) less than the intermediate and standard size Chrysler wagons. The liftgate opening was nearly 4 ft (1.2 m) wide and 27.6 in (70 cm) high. With the rear seat folded down, the cargo area was 74 in (190 cm) long at the belt line and 43.2 in (110 cm) wide between the wheel houses. Premium station wagons in either the Aspen SE or Volaré Premier series featured simulated woodgrain trim along its exterior sides. On Aspen SEs, the woodgrain was framed in simulated blond (painted metal) wood-look trim. On the Premiers, the side panels were trimmed in stainless steel frames accented in matte black. Aside from the brand badging and grilles unique on each brand, this station wagon trim element remains one of the few visual clues that differentiated the Aspen from the Volaré. Side covers of the cargo area were made of one-piece injection molded polypropylene. Covered, lockable stowage compartments of 1.5 cu ft (0.042 m3) capacity were provided in these panels; these compartments were standard on the Aspen SEs and optional on the low-line wagonds.[1]

The first year of the Aspen was met with much fanfare and sales.[citation needed] The replacement for the venerable Dart, the Aspen would share the same engines and 3-box body style with its predecessor, but not much else.

Nothing much changed for the Aspen's second year. A new T-top was added to the coupe's option list this year. The R/T package added a "Super Pak" option. This consisted of front and rear spoilers, wheel opening flares and louvered rear windows. A new stripe kit was also added as well. An R/T equipped with this package became a "Super R/T". The Volare was Canada's top selling car this year. Total production was 266,012 (Aspen) and 327,739 (Volaré).[citations needed]

The Aspen went through numerous changes for 1978. The three trim lines were consolidated into one. The Custom and Special Edition lines were still available but were now reduced to option packages. The Aspen also received a new front fascia, similar to the Volaré, while the Volaré's grille was restyled with an eggcrate pattern. There were new performance packages, the Super Coupe and Kit Car. Both packages used the same performance exterior add-ons as the "Super Pak", now renamed the "Sport Pak", but came in different colors as well as different options.

The Super Coupe came with GR60x15 Goodyear GT radial tires mounted on 15x8 wheels, a heavy-duty suspension with rear sway bar, a matte black finish on the hood and came only in one color - Sable Tan Sunfire Metallic. Special three color (orange, yellow and red) stripes separated the body color from the matte black colors. Only 531 were built.[citations needed]

The Kit Car, made in honor of NASCAR legend Richard Petty, was supposed to look as much like a race car as possible. The wheels had no hubcaps, the wheel opening flares had a bolted on look, and even the windshield had metal tie downs just like the race cars. Unlike a race car, the Kit Car came standard with an automatic transmission. A special addition was a decal kit with large door mountable "43" decals and 360 decals for the hood. These decals were shipped in the trunk either to be installed by the dealer or by the owner. Most people however, left them in the trunk. It only came in one color - a special two-tone red. The Kit Car would prove to be one of the rarest Aspens ever built, as only 145 were ever built.[citations needed]

A new Sunrise package, similar to the Volaré Duster package, was also new for 1978. This was available only on the coupé, and consisted mainly of new stripes and louvered rear windows. 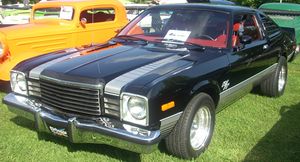 Not much would change for the Aspen in its second to last year of production. The only readily visible change was the replacement of the amber rear turn signals with red ones again. The 1978 option packages continued into 1979, with the exception of the Super Coupe and Kit Car. A new 85 mph (137 km/h) speedometer, new colors and a diagnostic connector for the engine were added. The station wagon was available as a "Sport Wagon" with special stripes, a front airdam, and wheel arch flares. Total production came to 121,354 (Aspen) and 178,819 (Volaré).[citations needed]

For its last year of production, the Aspen and Volaré gained a new front end with rectangular headlamps, and shared the hood, fenders and front bumper with the Diplomat. Special and Premier packages were available. The Special came only on the sedan and coupe. The R/T package was installed only on 285 Aspens for this year before the Aspen name as well as the R/T badge would be discontinued. Total production came to 67,318 (Aspen) and 90,063 (Volaré).[citations needed]

Between 1977 and 1979, the small Swiss specialty automaker Monteverdi built a modified version of this car, called the Sierra, intended to compete in Europe's luxury car market.

The F-body cars were withdrawn from production worldwide after 1980, but spawned two platforms, the Chrysler J platform and the Chrysler M platform.