The LA engine (Light A engine)[who?] was an evolution of the small-block Plymouth polyspheric-head A engine. LA engines are pushrod OHV designs and use a 90° V block. The combustion chambers are wedge-shaped, rather than the polyspherical combustion chambers in the Plymouth A engine or the hemispherical chambers in the Chrysler Hemi engine. All are cast iron, except for the Viper V10, which is aluminum. LA engines have the same 4.46-inch (113 mm) bore spacing as the A engines.

The LA family was updated and branded as the Magnum V6 and V8 in 1992. While the Magnum 3.9, Magnum 5.2, and Magnum 5.9 (1993-up) engines were significantly based on the 239, the 318, and the 360 — respectively — many of the parts will not directly interchange and are not technically LA engines (the only parts that are actually unchanged are the crankshafts and connecting rods). Magnum cylinder heads use a different oiling system and individually mounted rocker arms (AMC style) and a CCW rotation water pump with a much improved housing. The intake manifolds share basic dimensions but will not interchange without modifications. Chrysler's engineers redesigned the oil seals on the crankshaft to improve anti-leak seal performance. Although the pre-Magnum ('71-'92) and Magnum versions of the 360/5.9 are both externally balanced, the two are balanced differently (the 360 Magnum uses lighter pistons) and each requires a uniquely balanced damper, flywheel, drive plate, or torque converter. The valve covers on the Magnum have 10 bolts rather than the previous 5, for improved oil sealing.

Chrysler offers a line of crate engines based on the Magnum designed to bolt into older muscle cars and street rods with little modification. Some of the changes to facilitate this were using a 1970-93 water pump so that older pulleys and brackets could be used, as well as an intake manifold that uses a carburetor instead of fuel injection. With a high lift cam and single plane intake, the crate Magnum 360 was rated at 380 hp (280 kW) with the Magnum heads. Later models equipped with "R/T" or aluminum cylinder heads produced 390 hp (290 kW). A 425-HP bolt-in fuel injection conversion kit is also available.

Production of the LA series was long handled by the Mound Road Engine factory in Detroit, Michigan as well as in Mexico. With most versions cancelled, that plant was closed in 2002.

The 273 (4.5 L) was the first LA engine, introduced in 1964 and offered through 1969, rated at 180 BHp. It had a 3.625 in (92 mm) bore and 3.31 in (84 mm) stroke. It had a mechanical solid lifter valvetrain until 1968 when hydraulic lifters were introduced. A special version was also available in 1966 only - it used a 0.500-inch (12.7 mm) lift solid-lifter camshaft, fabricated-steel-tube exhaust, and a Holley 4-barrel carburetor, producing 275 horsepower (1 hp/cu in). It was available in the Dodge Dart only, and the car so equipped was called the "D-Dart". A 235 hp (175 kW) version with a less aggressive camshaft and without the tube headers was available on regular production Darts, Valiants, and Barracudas from 1965 to '67, it was standard only in the Barracuda Formula S model.

The LA 318 was a 318 cu in (5.2 L) relative of the A 318. Like the A 318, it has a larger bore at 3.91 in (99 mm) as well as a stroke of 3.31 in (84 mm). It appeared shortly after the 273, in 1967, and proved tremendously successful. A version of this engine was available until 1991 when its was superseded by the Magnum version (See below). It used hydraulic lifters and a two barrel carburetor for most of its production, though four-barrel Carter Thermo-Quad and Rochester Quadrajet carburetors were used in police applications starting in 1978. The 318 received roller lifters and a fast-burn cylinder head in 1985, and throttle-body electronic fuel injection for truck applications starting in 1988.

The Magnum 5.2, released in 1992, was an evolutionary development of the 318 with the same displacement. The Magnum development included the multiport fuel injection, new cylinder heads with a closed combustion chamber, a new higher-flow valve angle, increased valve lift, and new intake and exhaust manifolds. Power was up to 230 hp (170 kW) and 300 lb·ft (410 N·m). Production of the Magnum 5.2 ended with the 2003 model year Dodge Ram Van. It was replaced by the new 4.7 L PowerTech V8.

As the Detroit power wars heated up in the mid-1960s, Chrysler decided to produce a small block V8 specifically designed for high performance applications. The goal was to have a lightweight, high output engine equally suited for the drag strip or an oval track[citation needed]. The result of this decision was the 340 cu in V8. Chrysler's engineers increased the 318's cylinder bores to 4.04-inch (103 mm) while keeping the 318's 3.31-inch (84 mm) stroke. Anticipating higher loads resulting from racing operation, the engineers fitted a forged steel crankshaft instead of the cast nodular iron unit used in the 318. A 4-barrel carburetor was mated to a high-rise, dual plane intake manifold. This induction setup fed into a set of cylinder heads that are still considered[who?] one of the best of that era. The heads were high-flow items with big ports, and used 2.02-inch (51 mm) intake and 1.60-inch (41 mm) exhaust valves. An aggressive cam[vague] was fitted to take advantage of the much better breathing top end. 1968 4-Speed cars got an even hotter cam, but it was discontinued in 1969[citation needed]. The engine was equipped with hydraulic lifters[citation needed]. Power output was officially stated as 275 hp (205 kW) for the 4 barrel and 290 hp (216 kW) for the 6-pack version with triple 2-barrel carburetors. Using flat-top pistons, the 340's compression ratio was 10.5:1, placing it near the limit of what was possible on pump gas[citation needed]. The 340 also used heavy-duty parts such as a dual timing chain, windage tray and revised[vague] oil pump[citation needed].

In 1970, Chrysler offered a special version of the 340 for use in the Challenger TA and Cuda AAR. The "TA" engine featured a heavy duty short block featuring additional webbing in block to allow for 4 bolt main bearing caps, double roller timing chain and 10.5:1 compression. The heads featured larger ports compared to a standard 340 and offset rocker arms that allowed the pushrods to be moved away from the intake ports for improved airflow. They featured an aluminium intake manifold with three two barrel Holley carburetors and a dual points ignition system.

Like many other performance V8's of the day, for insurance reasons, the 340 engine's power output was officially understated[citation needed]. In reality, either the 4bbl or 6bbl configuration could produce at least 315 to 320 hp (235 to 239 kW)[citation needed]. The 340 developed a reputation for outperforming much larger and heavier engines, with the attendant handling benefits provided by the relatively light-weight 340. The engine was praised[who?] as a high-revving unit with good durability, making it popular with circle-track racers[citation needed].

Due to the combination of rising gas prices and insurance company crackdown on high-performance vehicles[citation needed], the 340 did not stay in production long. It was released in 1968, detuned with lower compression and smaller 1.88 inch intake valves in 1972[citation needed], and was withdrawn from production after the 1973 model year. 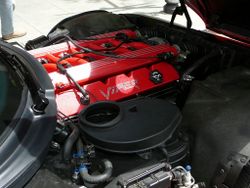 The Viper V10 is based on the rest of the LA family, and appeared with the Dodge Viper in 1992. It was conceived and prototyped as a Magnum 5.9 with two extra cylinders and a longer stroke of 3.88 in (99 mm).

Originally designed as a truck engine[citation needed], Chrysler engineers revamped Dodge's cast-iron block V10 for the Viper[citation needed] by recasting the block and heads in aluminium alloy. Prototype blocks were cast by Lamborghini, at the time a Chrysler division. Some felt that the pushrod two-valve design, while adequate for the truck application for which the engine was originally created, was unsuitable for a performance car. However, Chrysler was uncertain about the Viper's production costs and sales potential[who?] and so declined to provide the budget for the modification[citation needed].

Production of the V10 engine started at Mound Road Engine before moving to Conner Avenue Assembly, where the Viper itself is built, in May 2001. In addition, the Viper V10 was installed in the Dodge Ram SRT-10, earning the truck the Guinness World Record for fastest production truck (later bettered by an Australian production car; the Holden HSV Maloo that uses the LS2 Corvette engine). The Dodge Tomahawk concept motorcycle also uses this engine.

Originally conceived in the 1980s[citation needed] as a truck engine for the larger Rams[citation needed], the Magnum V10 was re-engineered as the engine of the Dodge Viper[citation needed] in 1990 by Chrysler Engineering, and used in the Ram 2500 starting in the 1994 redesign of the Ram line. It provided far less power than the V10 in the Viper and used a cast-iron cylinder block. Output was 300 hp (220 kW) and 400 lb·ft (540 N·m). It was discontinued after the 2003 model year.