The Wrangler (also known as the YJ, TJ, and JK, as explained below) is an SUV produced by American automaker Chrysler under its Jeep marque. It is a successor to the famous World War II 'Jeep' vehicle by way of the Willys civilian Jeep (CJ) in the 1950s, later produced by Kaiser-Jeep and by American Motors (AMC). The Wrangler debuted in 1987, was updated in 1997 and again in 2007, and is still popular today.

From 1987 until 1992 the Wrangler/YJ was built in Brampton, Ontario, Canada. It was then built in the Toledo South Assembly plant until mid-2006, after which the plant was slowly torn down. The Wrangler is currently produced at Jeep's Toledo North Assembly plant in Toledo, Ohio.

The Wrangler name was not used in Canada, as it was a trim level of Chevrolet pickup in that market. Instead, 1987 to 1995 models were sold as YJ, and 1997 to 2006 models were sold as TJ. The model designations of YJ and TJ are used throughout the world in the Jeep enthusiast community to differentiate which model is being spoken of instead of using the more ambiguous term "Wrangler".

The Jeep YJ, sold as the Wrangler, replaced the much-loved but slower-selling Jeep CJ in 1987 and was built in Brampton, Ontario, Canada until the plant closed on April 23, 1992. It was a new design with a wider wheelbase, slightly less ground clearance, a galvanized body and more comfort. The YJ also had a leaf spring suspension similar to that of the CJ, however, the springs were wider, and the YJs sported trackbars and swaybars for added handling. YJs are easily identifiable by their rectangular headlights, which were a source of controversy when introduced. Despite the new grill, the body is very similar to the CJ7's, and it is interchangeable with some minor modifications. The YJ also was given a larger windshield over the CJ. 632,231 YJs were built through model year 1995, though YJs were still produced into mid '96 bringing the total production number to 685,071 units.

The roll cage was extended in 1992 to allow for rear shoulder belts, and anti-lock brakes were added as an option the next year. An automatic transmission option for 4-cylinder Wranglers came in 1994 along with a center high-mounted stop light.

In 1994, the slave cylinder on manual transmissions was moved outside of the transmission's bellhousing to allow for easier replacement, and in 1995 larger U-joints were used [front axle U-joints(297x) and rear pinion U-joint(1330)]. For the 1992 model year, the YJ switched over to an electronic speedometer outmoding the cable speedos on older YJs. 1995 was the only year to have a fully galvanized frame and body.

YJs produced in early 1996 were sold as 1995 model years, but featured a few new parts not seen on any earlier YJ. This included: the new TJ bumpstops on the hood (rubber boots vs the traditional U-bars), reinforced tailgate hinges, and it has been said that some even had rear TJ bumpers. Some lucky ones also got the newly tuned I6 that was tuned to run quieter in preparation for the TJ.

From 1991 until 1994, Jeep produced an options package on the YJ Wrangler listed as the "Renegade Decor Group". Initially, all Renegades were White, Black or Red. In 1992, Blue was added, in 1993, Bronze. The Renegade Decor Group was a $4,266.00 option over a base Wrangler in 1991 and included special alloy wheels, exclusive body flares, along with many other features.

Contents of the Renegade Decor Package

Additionally, hardtops received a mandatory rear window defroster at a $164.00 premium. Hardtops themselves were a $923.00 option.

A column shift automatic was also an available option (this option was rare).

These vehicles were sent as optioned Wranglers to Auto Style Cars in Detroit, where the Renegade Decor Package was installed, then shipped back to Jeep for delivery to dealers. Renegades all have a small sticker on the driver's side door, right above the latch denoting the visit to ASC.

At the price premium over a standard Wrangler, sales were fairly limited, so finding one today is a semi-rare occurrence. The price, plus what hardcore Jeepers felt were "funny looking plastic fenders" limited the sales. Although having nearly identical off-road capabilities, these Jeep were typically used as "beach cruisers" because of both their price and rarity, as well as the fact that their over sized flares and body cladding were not designed for the abuse that tree branches and over sized tires can deal out.

North American YJ/Wrangler were available in the following standard trims.

The YJ gave way to the TJ for the 1997 model year (note that there was no 1996 model year; the 1997 TJ was released in Spring 1996). This updated Wrangler featured a coil-spring suspension (based on that of the Jeep Grand Cherokee) for better ride and handling, and a return to the CJ's iconic round headlamps. The engine is the same 4.0 L AMC 242 Straight-6 used in the Cherokee and Grand Cherokee. A 2.5 L AMC 150 Inline-4 motor was available on entry-level models until 2003 when the 2.4 L DOHC Neon 4-cylinder engine replaced it.

Other changes included the 1999 additions of a larger standard fuel tank, child seat tethers and sound system improvements in 2000, and a new console, steering wheel, and a revised dashboard for 2001. 2002 saw other minor changes including new colors, along with available wheel styles.

The Wrangler Rubicon (named for the famed Rubicon Trail in the Sierra Nevada Mountains) was introduced in 2003. It featured front and rear Dana 44 axles with built-in air-actuated locking differentials, 4:1 low-range NV241OR transfer case, 4.10:1 differential gears, 16 in alloy wheels, and Goodyear MTR P245/75-R16 tires. 2003 to 2004 featured a standard NV3500 five-speed manual transmission, which changed in 2005 to the NSG370, a Mercedes-sourced six-speed. The optional 42RLE four-speed automatic transmission was available from 2003 to 2006.

In 2004, Jeep introduced the Wrangler Unlimited with a 10 inch (~25.4 cm) longer wheelbase (LWB), a Dana 44 rear axle with a 3:73 gear ratio and the Command-Trac 231 transfer case; this model is also known by its unofficial designation of LJ. In 2005, Jeep released the Rubicon Unlimited, which has the wheelbase of the Unlimited and the off-road features of the Rubicon such as front and rear Dana 44 axles with locking differentials, diamond plate rocker guards, an NVG241OR transfer case with a 4.0:1 low range, 245/75R16 Goodyear MT/R tires, a six-speed manual transmission and other comfort and convenience options not offered on other Wranglers. This model of the Jeep Wrangler has nearly double the towing capacity than its shorter wheelbase sibling due to increased wheelbase. 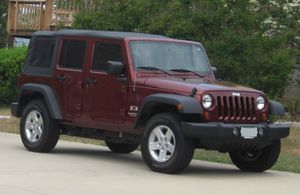 The 2007 model year brought the complete redesign of the Jeep Wrangler, in both two and four-door models. The TJ platform was replaced by a new JK platform. This next-generation Wrangler was significantly larger than the existing model, with a 2 inch (50.8 mm) longer wheelbase and 3.4 inch (86.4 mm) wider track, though the two door model is actually 2.5 inches shorter in the overall length than the TJ, allowing for better approach and departure angles. With a larger available standard tire size of 32 in, breakover angle is unchanged.

JK was introduced at the 2006 North American International Auto Show with past Chrysler group CEO Tom LaSorda driving one up some steps and through a plate glass window, just as Robert Lutz had done at the show in 1992 with the Jeep Grand Cherokee. The JK was first available for purchase with the 2007 model year. 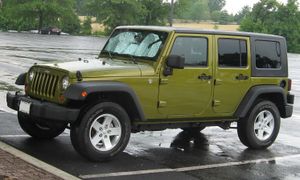 The JK Wrangler is offered in two versions:

A six-speed manual transmission is standard, with a four-speed automatic transmission offered as an option. The lower two levels have the Jeep Command-Trac NV241 part-time two-speed transfer case with an optional Trac-Loc limited-slip differential, while the Rubicon uses a Rock-Trac version of the NV241 with a 4:1 low range. Electronic locking front- and rear-axles called Tru-loc are also standard on Rubicon models. (rear locker optional on X models)

The JK runs almost all vehicle functions other than steering under computer software control. Engine, transmission, and to some extent braking are computer controlled, as are lights and auxiliary systems. This is a first for the Wrangler. As of mid-2007, there have been three safety recalls for software fixes.[1]

A Sunrider convertible soft top is standard equipment. Also available on the JK model is an optional 3-piece modular hardtop. Although the doors can still be removed in traditional Wrangler fashion, power windows and remote power door locks will be offered for the first time in a Wrangler. Another first is an available navigation system. This is the first generation of the Jeep Wrangler to have a change in the tail lamps.

Both Standard and Unlimited Wranglers are available in three trim packages. Each package can be ordered with either hard or soft top, full or half doors(08 unlimited only).

The X model is the "bare bones" wrangler that can be customized to a buyers specifications adding such options as air conditioning, power windows and locks soft or hard top, fog lights, 32" tires, rear LSD or locker, electronic swaybar disconnect, and other accessories.

The Sahara model is the "luxury" model offering accessories such as body colored fenders, built in navigation, "Yes Essentials" seats, power windows and locks, a 7 speaker infinity sound system with subwoofer, among others. 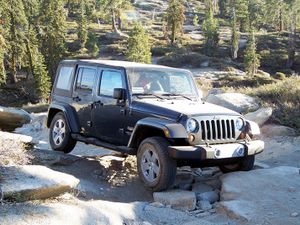 Unlimited has the same engine and transmission choices as a short-wheelbase JK. X and Sahara trims offer an option of 2x4 rear wheel drive. It is the only four door convertible available in the U.S., since the Hummer H1 with optional rag-top is no longer sold as a civilian vehicle.

The Unlimited offers more options and equipment than any previous Wrangler model, including standard electronic stability program and optional seat-mounted side airbags, remote keyless entry, navigation system, and Sirius satellite radio.[4] The navigation and satellite systems are a part of the MyGig Entertainment system that also has a hard drive allowing for the storage of MP3 music files and pictures. [5]

On September 13, 2007, at the Defence Systems & Equipment International trade show, Chrysler LLC unveiled a Wrangler Unlimited version designed for military use dubbed the J8. The unarmored Jeep J8 is equipped with larger brakes, axles and suspension components than the civilian version and has a payload capacity of 1,339 kg (2,952 lb). The J8 also differs from the civilian model by utilizing heavy-duty rear leaf springs for carrying heavier payloads. The Jeep J8 is powered by a 2.8-litre four-cylinder turbo-diesel engine that produces 118 kW (158 hp) and 400 N·m (295 lbf·ft) of torque, providing towing capability of up to 3,500 kg (7,700 lb). The engine is mated to a five-speed automatic transmission. The J8 also features a unique air-intake system with special filtration and a hood-mounted snorkel that enables the J8 to wade in water up to 762 mm (30 in) deep and tackle sandstorm conditions for up to five hours. Available as a two-door with an extended pickup bed for personnel or equipment transport, or a four-door multipurpose vehicle, it may be produced with numerous vehicle-body and seating configurations in either right-hand- or left-hand-drive.[6] Targeted for use by the militaries in overseas markets, the J8 is not available in the United States because it will not meet U.S. emissions requirements. The J8 will be produced in Egypt.[7]

The 2008 edition of Forbes Autos lists the four-wheel-drive convertible Jeep Wrangler at number four among the top ten vehicles with the highest resale value.[10]

In September 2008, Chrysler Vice Chairman Tom LaSorda unveiled a range-extended electric 4-door Wrangler along with similarly engineered Town and Country minivan and a purely electric sports car. The Wrangler would have a 40-mile (64 km) range before a gas engine starts and begins supplying additional electricity.[11]