The Chrysler Atlantic was a concept car created by Chrysler. It was first shown in the year of 1995. The Atlantic was designed by Bob Hubbach and inspired by the Bugatti Atlantic. The idea for this car began out as a sketch on a napkin by Chrysler's president Bob Lutz in early 1993 and also involved the automaker's chief designer, Tom Gale. 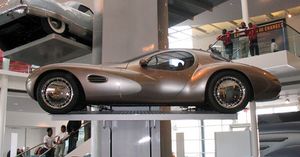 The Atlantic has several similarities to the opulent vehicles of the 1930s such as the aforementioned Bugatti Type 57S Atlantique (or Atlantic). Its styling is also more than a little inspired by the Talbot-Lago T150 SS Coupe that was constructed in 1938, such as the shape of the side windows and the curved boot. Some of the retro details include a straight-8-engine that was actually constructed from two 4-cylinder Dodge Neon engines with an S configuration 4.0 L., which is rarely used in modern cars. Other retro touches to the car's look include the interior that is replete with Art Deco-style gauges. The Atlantic Concept has around 360 horsepower (268.5 kW) and uses Chrysler's Autostick transmission. Riding on a 128-inch (3,251 mm) wheelbase, its front wheels measure 21 inches and 22 inches in the rear — large at that time.

It was one of Chrysler's most popular concept vehicles and has proven popular enough to still make the occasional public appearance.

The Atlantic's popularity has also allowed its overall design and image to be associated as part of both advertising and labeling of packages associated with a variety of automotive car care products, accessories, and electronics.