The Chrysler Saratoga was a full-sized automobile produced by the Chrysler Corporation. Chrysler first used the Saratoga nameplate on its 1939 models, and continued to use the name off and on until 1960 when it retired the product name for the US markets. The name reappeared again in 1989 for the European version of the Dodge Spirit.

The Saratoga nameplate first appeared in 1939 and was applied to Chrysler's least expensive full-size eight cylinder models, below that of the New Yorker Special and the Imperial.

In 1940, Chrysler assigned the Saratoga to its Series 26 eight-cylinder models, along with the Traveler and New Yorker models. For 1940, the car was available only as a four-door sedan, and in two interior configurations, sport and formal.

The Saratoga nameplate returned for 1946, positioned as Chrysler’s least expensive eight-cylinder model, in a full array of body styles. Annual styling changes were almost non-existent between 1946 and the "First Series" 1949 Chryslers. Because of government restrictions on manufacturer source goods, Chrysler offered white steel "beauty rings" on its car wheels to give the appearance of wide white wall tires. White wall tires as an option returned in 1947.

When the fully redesigned 1949 "Second Series" Chryslers bowed in mid-season, the Saratoga was once again regulated to two body styles, the four-door sedan and two-door Club Coupe, and rode the Chrysler Windsor's shorter wheelbase. From 1950 through the 1953 model year, annual changes the Saratoga followed in lock step with Chrysler other models, the biggest exception was the 1951 introduction of Chrysler’s famed Hemi V8. When the engine was dropped into the lighter short wheelbase Saratogas, performance results were exceptional. An eight passenger limousine was offered as a special order body style for 1951 only.

Chrysler dropped the Saratoga nameplate for 1954, instead preferring to rely on its Windsor and V8-powered New Yorker and Imperial models from 1954 to 1956.

Chrysler reused the Saratoga nameplate in 1957 as part of its "Forward Look" styling by Virgil Exner. Again, the Saratoga was based on the base Windsor model, but received trim upgrades and better appointments inside the passenger compartment. The base V8 in the Saratoga was a cast-iron block V8; Chrysler’s highly praised Hemi was available as an option. Early 1957 models featured dual headlights, with quad-headlights as an option; by the model year's end all Saratogas were outfitted with quad headlights.

For 1958, all Windsors were shifted to the Dodge chassis, and used a modified front end design based in part on Dodge's front clip - this was especially evident around the Windsor's headlights. Sratogas continued to be based on the shorter wheelbase, but used the traditional Chrysler front clip and was available in three body styles – four-door sedan, four-door hardtop, and two door hardtop coupe.

In 1959, the Saratoga was based on the longer Chrysler wheelbase (126 in (3,200 mm)), but used the Windsor body (aft of the firewall) with the longer New Yorker front clip.

In 1961, Chrysler decided to release a new low-price entry-level model called the Chrysler Newport, a name which in 1961 was commonly associated with Chrysler’s expensive hardtops in the early and mid 1950s. While the Newport took the place of the Windsor in the lineup, the company cancelled the mid-range Saratoga, and elevated the Windsor name to the mid-level position. In its final year, approximately 15,525 1960 Chrysler Saratogas rolled off the assembly line. 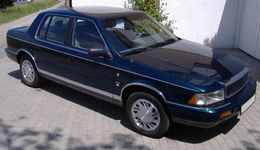 1994 Saratoga based on the LeBaron Sedan

The Saratoga name was revived in 1989 when Chrysler rebadged its Dodge Spirit sedan for export to Europe. Marketing of this Saratoga was officially discontinued in 1993, but the Saratoga continued being built and exported, and parts unique to it continued being catalogued through the 1995 end of A-body production.

These export-market Saratogas were not simply Dodge Spirits with different nameplates. Differing vehicle safety regulations in the rest of the world versus North America required the Saratoga to have different headlamps and front, side, and rear lights and reflectors, glass, mirrors, seat belts, instrument clusters and radios. All Saratogas featured front bucket seats, the front split-bench seat that was an available option in the US for the Spirit and its derivates has never been offered on European markets. Popular Saratoga combinations were the base models with a 2.5 L TBI I4 engine and a 5-speed manual transmission. Starting in 1993, the Saratoga was available with leather seats and other luxury touches not provided in the North American market. Most 1993 and later Saratogas were eqipped with the 3.0 L MPI Mitsubishi-built V6 and the A604 "Ultradrive" 4-speed automatic transmission. A small number of models equipped with the turbocharged version of the 2.5 L engine were also sold. All Saratogas were equipped with the highest-specification suspension and brake systems made by Chrysler for the A-body.

The last Saratogas, sold in small numbers in Germany, The Netherlands and Belgium in 1994 and 1995, were actually based on the US-market Chrysler LeBaron Sedan. They can be identified by additional fender chrome and an "LE" badge on the trunklid. These models were all equipped with the 3.0 liter Mitsubishi V6, the A604 automatic transmission, leather seats and A/C.